Carl Boggs writes on the movement for workers' councils, looking at the examples of the failures of the Russian and German revolutions, and the Italian Biennio Rosso.

A conspicuous deficiency of the Marxist tradition has been the failure to produce a theory of the state and political action that could furnish the basis of a democratic and non-authoritarian revolutionary process. The two most widely-tested strategies for advancing revolutionary goals - Leninism and structural reformism - provide no real alternative to the bureaucratic hierarchy, the power of the centralized state, and the social division of labor characteristic of bourgeois society. While Leninism did furnish a mechanism for overturning traditional structures, it has reproduced within the party-state a bureaucratic centralism that retards progress toward socialism. And structural reformism, as expressed in traditional Social Democracy and the Communist parties of the advanced capitalist societies, has led to the institutionalization of working-class politics, into bourgeois electoral, judicial and administrative structures. Both strategies have actually reinforced the growth of modern bureaucratic capitalism through their obsession with state authority, "efficiency" and discipline.
Because these models lack a conception of the particular socialist forms that would replace the established models of domination, and since both mirror and even extend some of the most repressive features of the bureaucratic state, they are never really able to escape the confines of bourgeois politics. Thus "Marxism-Leninism" and Social Democracy, which in the U.S. have been the main strategic responses to the disintegration of the new left, are actually two sides of the same coin. Despite their ideological contrasts, they rest upon many of the same theoretical (and even programmatic) assumptions.
It would be easy to attribute this phenomenon to the temporary aberrations of "Stalinism" and "revisionism", but the problem has deeper roots. It stems from the failure of Marxism to spellout the process of transition. Note that Marx thought communism on a world scale would appear organically and quite rapidly. One finds in Marx scarcely a hint of what forms, methods, and types of leadership would give shape to the unfolding socialist order; whatever strategic directions can be unravelled from his work are ambiguous and often inconsistent.(l) At times he seemed to indicate that socialist transformation would resemble .the passage from feudalism to capitalism, to the extent that changes in civil society would necessarily precede, and anticipate, the actual transfer of political power - but he did not set out to conceptualize this process or take up the problem of strategy.
The crude determinism that overtook European Marxism in the period between Marx's death and World War I did little to clarify this task. The presumed mechanics of capitalist development undercut the need for a conscious scheme of transition; "crisis", collapse, breakdown-these fatalistic notions propelled Marxism toward the most naive faith in progress. Since that capitalism was expected to disappear through its own contradictions (the falling rate of profit, crises of overproduction, concentration of wealth, immiserization of the proletariat), the transformative process was never viewed as problematic. The ends and methods of socialist revolution were assumed to be determined by the logic of capitalism itself, as automatic mechanisms that side-stepped the issue of political strategy and subjective intervention. Obstacles that stood in the way of this historical advance toward socialism - bureaucratic domination, the social division of labor, lack of mass socialist consciousness - were viewed as merely reflections of an outmoded production system. Attempts to confront such obstacles directly, or to specify the actual character of the transition, were dismissed as exercises in Utopian speculation.
Leninism overcame this strategic paralysis, but its "solution" was an authoritarian and power-oriented model that only further repressed the democratic and self-emancipatory side of Marxism. In the past century, the most direct attack on statist Marxism has come from what might be called the prefigurative tradition, which begins with the nineteenth century anarchists and includes the syndicalists, council communists. and the New Left. By "prefigurative", I mean the embodiment, within the ongoing political practice of a movement, of those forms of social relations, decision-making, culture, and human experience that are the ultimate goal. Developing mainly outside Marxism, it produced a critique of bureaucratic domination and a vision of revolutionary democracy that Marxism generally lacked. Yet, wherever it was not destroyed by the bourgeois state or by organized Marxist parties, it fell prey to its own spontaneism, or wound up absorbed into established trade union, party and state institutions. These historical limitations, along with a powerful critique of Leninism and Social Democracy, are the legacy of prefigurative radicalism that commands renewed attention today.

1. SOCIALISM OR STATISM? THE PROBLEM DEFINED

3. RUSSIA: THE TRIUMPH OF JACOBINISM

4. ITALY: THE LIMITS OF SPONTANEISM

[1]. Stanley Moore, Three Tactics: The Background in Marx (New York: Monthly Review Press, 1963).
[2]. George Lukacs, Lenin (Cambridge, Mass., MIT Press, 1971), Passim.
[3]. Francois George, "Forgetting Lenin", Telos #18 (Winter, 1973-74). See also Frederic and Lon Jean Fleron, "Administrative Theory as Repressive Political Theory: The Communist Experience", Telos #12 (Summer, 1972), pp. 89-94.
[4] See the Flerons, op. cit., and Ulysses Santa-Maria and Alain Manville, "Lenin and the Problems of Transition", Telos #27 (Spring. 1976), pp. 89-94.
[5] Svetozar Stojanovic, Between Ideals and Reality (New York: Oxford University Press, 1937), ch. 3.
[6] The Italian Communist Party, for example, advocates a two-pronged strategy of political "democratization" and economic "modernization". The first objective involves revitalizing parliament and local administration vis-a-vis central executive power; eliminating patronage, corruption, waste, and nepotism in government while building a more competent professional civil service; making public agencies more open and accessible; and developing a system of national "democratic planning". The second includes rationalizing production by eliminating the vestiges of backwardness and parasitism in Italian capitalism; undermining monopoly power and imposing limits on "distorted privileges"; encouraging productive efficiency through governmental development scientific and technical programs; modernization of agricultural production; and development of a broad welfare system.
[7] As Maria A. Macciocchi writes of her own experience as a PCI candidate for parliament, electoral campaigns tended to degenerate into spectacles and oratorial contests filled with shallow platitudes. She found it extremely difficult to raise substantive issues, for the PCI was too frightened of alienating potential new recruits from its electoral constituency. See M.A. Macciochi, Letters from Inside the Communist Party to Louis Althusser (London: New Left Books, 1973), Passim.
[8] See C.George Benello, "Anarchism and Marxism", Our Generation (vol. 10, no. 1, fall. 1974), pp: 55-56.
[9] Andre Gorz, ed., The Division of Labor (Atlantic Highlands, N.J.: The Humanities Press, 1976), p. xi.
[10] See S.A. Marglin, "What do Bosses do?", in Gorz, op. cit. In modern societies, this bureaucratic domination increasingly permeates most spheres of everyday life to the extent that it becomes part of the psychology of the masses. See Henry Jacoby, The Bureaucratization of the World (Berkeley: University of California Press, 1973), p. 189.
[11] The role of local councils in stimulating the development of proletarian subjectivity - and helping to overcome political fatalism - needs to be stressed. It was central to Gramsci's vision of the councils during the Ordine Nuovo period, when he saw one of their major contributions as instilling a "psychology of the producers" in the workers. It was also a common theme in Pannekoek and the German council movement, which Aronowitz sees as a drive to undermine the authoritarian personality that is created through the factory bureaucracy, and the family. See Stanley Aronowitz, "Left-Wing Communism: The Reply to Lenin", in Dick Howard and Karl Klare, eds., The Unknown Dimension (New York: Basic Books, 1972). See also Daniel Kramer, Participatory Democracy (Cambridge, Mass.: Shenkman, 1972), ch. 7.
[12] Cornelius Castoriadis, "The Hungarian Source", Telos #30 (Winter 1976-77), p. 15.
[13] On the moderate character of the Petrograd soviet, see Oskar Anweiler, "The Political Ideology of the Leaders of the Petrograd Soviet in the Spring of 1917", in Richard Pipes, ed., Revolutionary Russia (New York: Doublcday and Co.. 1969). p. 148.
[14] On the distinction between Soviets and factory committees, see Peter Rachleff, "Soviets and Factory Committees in the Russian Revolution", Radical America vol. 8, no. 6. Nov.-Dec., 1974, especially p. 94, 103.
[15] See Dietrich Geyer, "The Bolshevik Insurrection in Petrograd", and John Keep, "October in the Provinces, in Pipes, op. cit., pp. 245-46.
[16] See Robert V. Daniels, The Conscience of the Revolution (New York; Simon and Schuster, 1969), p.84. Daniels sees this process as a crucial turning point in the evolution toward bureaucratic centralism.
[17] The economic strategy of this period was in fact a subordinate part of the general militancy strategy designed to maximize Bolshevik control. See Daniels, op. cit., pp. 121-25 and Maurice Brinton, The Bolsheviks and Workers' Control (London: Solidarity, 1970). p. 46.
[18] For a detailed account of this development, see: Brinton, op. cit., pp. 15-47.
[19] Quoted in Paolo Spriano, The Occupation of the Factories: Italy 1920 (London: Pluto Press, 1975), p. 123.
[20] Gwyn Williams, Proletarian Order (London; Pluto Press, 1975). p. 253.
[21] On the relationship between the German council movement and the theory of the crisis, see Sergio Bologna, "Class Composition and the Theory of the Party at the Origin of the Workers-Council Movement", Telos #13 (Fall, 1972), p. 26
[22] Bologna, op. cit., p. 6
23] Guido De Masi and Giacomo Marramao, "Councils and State in Weimar Germany", Telos #28 (Summer 1976), p. 27
[24] See Brian Peterson, "Workers Councils in Germany, 1918-1919", New German Critique No. 4 (Winter 1975), pp. 122-23.
[25] Gorz, "Technology, Technicians, and the Class Struggle", in The Division of Labor, p. 174.
[26] On the theories of Pannekoek, see Richard Gombin, The Origins of Modern Leftism (London: Penguin Books, 1975), pp. 88-97, and Aronowitz, op. cit.
[27] For an analysis of factory councils in the advanced industrial societies, see Adolf Sturmthal, Workers' Councils (Cambridge, Mass.: Harvard University Press, 1964), chs. 4-6.
[28] These developments are examined by Murray Bookchin, 'Reflections on Spanish Anarchism', Our Generation vol. 10. no. 1, Fall, 1975. pp. 24-35, and Daniel Guerin, Anarchism (New York; Monthly Review Press), pp. 139-143.
[29] Castoriadis, op. cit., pp. 7-14. He argues: "Thus, like the few weeks of the Paris Commune, for us the Hungarian events are more important than three thousand years of Egyptian history because they constituted a radical break with the inherited philosophies of politics and work, while prefiguring a new society." Ibid., p. 14.
[30] This tendency was more pronounced in the U.S. than in Europe, where the strong presence of Marxism tempered the extremes of new left spontaneism. For example, commitment to the goals of workers' control and self-management - more or less taken for granted by the European extraparliamentary movements - received little attention in the U.S. See James Weinstein, The Ambiguous Legacy (New York: New Viewpoints, 1975). ch. 7.
From Class against Class 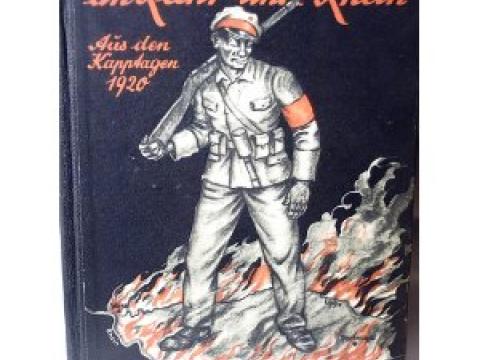 Anton Pannekoek and the theory of the transition - Radical Chains 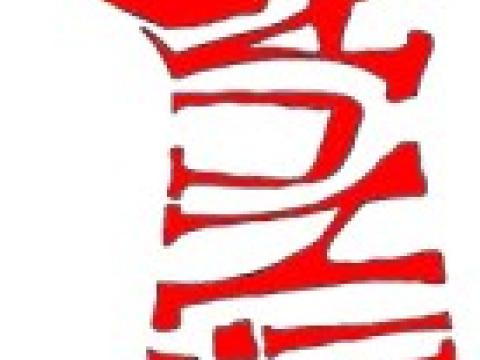 Interviewed in 1977 by Italian radicals, the late veteran council communist speaks on crisis, politics, organisation and revolution. This English…
Image 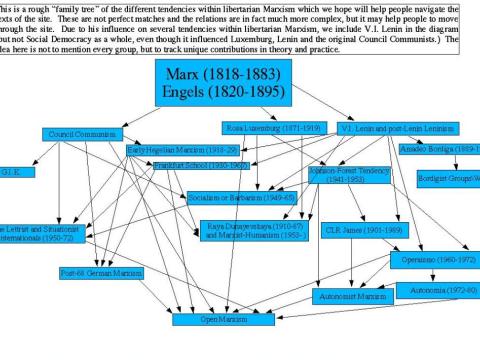 This tendency map was produced by Chris Wright for endpage.com, now part of the libcom.org library - it is designed to trace some of the…

Peter Rachleff's 1976 introduction to and history of council communism.