Museihushugi: The Revolutionary Idea in Japan

Over the past two years I haven't been able to put as much energy as I would have liked into the regular production of 'Libero'. Apart from having become heavily involved in child-care and other activities as well as having taken on a new and demanding job, much of my time has been absorbed by the compiling of a full-length history of the anarchist movement in Japan.

The project was originally a response to a request from Stuart Christie of Cienfuegos Press (though addressed to the entire collective, the task eventually fell on my shoulders alone) to edit the English translation of Victor Garcia's short book Museihushugi: el anarquismo japonés (Mexico City, 1976). Over the space of time, after discussions among the people concerned, it was decided to work the text into a comprehensive movement history. The result was Museifushugi: The Revolutionary Idea in Japan, jointly authored by Victor Garcia and Wat Tyler, to be published by Cienfuegos Press in mid-1980.

Ever since coming to Japan and helping to form the Libero International Editorial Collective in the autumn of 19749 it had been one of my aims to write a history of the anarchist movement here. In various articles in L.I. we tried to put together the bones of such a history, but the task was a daunting one. Even in Japan there are no (to my mind) satisfactory histories of the prewar movement, while no history at all has been written of the movement since 1945. Anarchist history in Japan, like that elsewhere (see Hiroshi Ozeki's article following this one), has been obliterated by the combined efforts of scholars and party hacks. Without the proposal to edit Victor Garcia's book, I would probably still be wondering where to start. Our Museifushugi is thus the first complete history of the Japanese anarchist movement in any language.

The Japanese anarchist movement, from its beginnings soon after the Meiji Restoration of 1868, has been one of the most dynamic in the world. Fighting against a government for which totalitarian repression was second nature, the movement gave up a series of martyrs right up to the outbreak of World War II and the crushing of all independent political initiatives. From the early 1920s on it also had to contend with the hostility and arrogance of the Leninists, thanks to which much revolutionary energy was wasted in frustrating ideological squabbles (which is not to suggest that the anarchists were free of all blame). Although this is the point at which the anarchists are usually written off by straight historians, the truth is that they continued fighting and suffering until the last hours of prewar Japan.

Following the defeat of Japanese militarism in August 1945, the anarchist survivors (some of whom had remained quietly active during the war years) emerged once again to fight an energetic campaign against the American Occupation and the gradual re-militarization of the Japanese economy. Dormant, like anarchist movements everywhere, during the 1950s, the Japanese anarchists burst into the public eye once again with the resistance to the Vietnam War and in the student movement, and since then have continued to maintain a minority presence on the Left. In the last ten years or so, anarchist methods - non-hierarchical organizing, direct action etc, - have spread beyond the anarchist movement itself to the growing citizens' resistance movements, and anarchist ideas have become widely known.

Up to now there has been no history of this movement. Even the few histories in Japanese tend to be mainly ideological accounts, stopping at 1937, with only a brief reference to postwar developments The lack of such a history always troubled us at 'Libero', and thanks to Victor Garcia's original effort and to Stuart Christie's invitation to edit it, at last we have been able to help remedy that lack. In Museifushugi we have tried to tell the whole story of the Japanese anarchists.

The book is more than just a history of the anarchist movement, however. On the assumption that the average reader will be unfamiliiar with conditions in Japan, the authors have tried at the same time to give a clear Picture of the social, political and economic background to the unfolding of anarchist activities. Together with the section on the history of Japan up to 1868, therefore, the movement history has been interweaved with explanations of the post-1868 transformation of Japanese society, Japanese social structure, and the political situation. Chapters on the labour movement, the women's movement, the student movement, the emperor system and so on also help put the anarchist movement into correct perspective.

While mainly western sources have been used for the background chapters, those describing the movement itself have as far as possible used the memories of actual Participants to supplement the overall accounts. Support for the editing work was also given by the comrades at 'Libertaire'. in Tokyo, and most of all by Mukai Kou, veteran militant and currently secretary of WRI-Japan, who gave up much of his time to help in various ways. Some sections of the text, such as those concerning the burakumin (social outcaste) anarchist movement, are actually based on drafts originally prepared by Mukai.

Speaking for myself, finally, I tend personally to go along with the idea of the radical feminists that all male revolutionaries up to now - including Proudhon, Kropotkin and the rest - have been mere reformers in that they did not recognize seek to promote the role of women in the revolutionary movement. Japanese anarchists, past and present, can unquestionably be criticized on this point, and I made my position clear in the text, particularly the conclusion, of Museifushugi. Digging out the anarchists' activities, however, also helped me to uncover much information previously unknown about libertarian women's activities. While the book as it stands is, therefore, a history first and foremost of Japanese anarchist men, it has meaning for me in this sense. By throwing light on the hitherto "hidden from history" activities or anarchist men, it Proves that what can be done for men can, with a little extra effort, be done for women too (one might say that anarchist women have been "hidden from history" twice over). When that second task is completed it will be possible to say for the first time that a truly "anarchist" history of the anarchist movement has been written. It's a task which, despite reservations stemming from my being, after all, a man, I'm looking forward to. Any helpers? 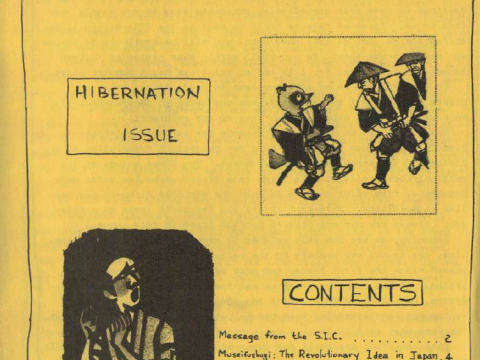