Bakunin's revolutionary career, though it had almost no conscious connection with Japan, thanks to that momentary contact made possible by the opening of the country in 1853, was enabled to reach its full fruition.

Had the Japanese government sustained its isolationist policy of the past 250 years for a few years longer, the growth of Bakuninist anarchism after 1864, the struggles with Marx at the First International, and thus the whole shape of today's revolutionary movement would have been drastically different. The opening of the ports of Yokohama and Hakodate thus coincided perfectly with Bakunin's decision to return to Europe, giving concrete shape to his plan of escape. Had it been otherwise, there is very little doubt that today Bakunin would be no more than another Russian martyr.

Japan, though Bakunin never acknowledged it, hence played an enormous part in his destiny. Some comments concerning his stay there will Put the episode in a clearer light.

The world of 1861 was very different from that of 1923, when Ôsugi Sakae made his trip to Europe. In opening Japan to foreign influences for the purpose of building a strong nation-state, the "progressive" samurai who seized control of the country in the Meiji Restoration of 1868 allowed certain (from their point of view) unsavoury principles in by the back door. By the turn of the century intellectuals like Kôtoku Shûsui had introduced Japanese revolutionaries to the ideas of Kropotkin, Bakunin, Marx and other writers, and along with a massive forced industrialization programme (helped by two imperialist wars in ten years), a radical labour movement had been born Ôsugi Sakae, born in 1885, grew up in this atmosphere.

By 1861, following Perry's gate crashing exploit of eight years before, American ships had become regular visitors to Japanese ports, joining those of Holland, since the 17th century the sole Western nation permitted to trade with the empire. Other nations, like Germany, Russia, England and France, seeking to extend their existing domains in India and Southeast Asia, had also been quick to force the Japanese authorities to allow the opening of consular offices, dazzled by the prospects of unlimited trade and urged on by soul-hungry mission organizations eager to claim the benighted heathens for the one true god.. As an added attract ion, Japan provided an ex~ cellent location of refuelling and refurbishing, both for warships patrolling the Pacific and for whalers en route to the Arctic.

The shogunal authorities, despite their initial fright, had bowed to all this pressure with good grace, but taken care to confine all foreigners to riven areas within certain of the ports open to trade. Hence not only the Yokohama Hotel itself, but even the very area in which Bakunin Found himself was likely to be closed to Japanese, and patrolled by to keep the foreigners from having any unnecessary influence upon them. It is thus conceivable, though not very likely, that Bakunin never even saw a Japanese; if he did meet any it was certainly not under conditions conducive to his -etting a run-down on the state of the nation. This would have to be taken account of in any criticism of Baki)ninls behaviour in Japan, and allowances made accordingly,

Failing personal contact, then, newspapers might have provided a source of information for Bakunin had he wanted any. We followed this up, and found ironically enough, that the first foreign-language newspaper pub- in Japan moved from Nagasaki to Yokohama in October 1861, one month too late to catch his eye. Judging from the quality of other expatriate newspapers, however, such as those published in the Chinese treaty ports , this one, the 'Japan Herald', would not have told him much about Japan anyway, Still, it might have given him a perspective on political affairs into which his seasoned revolutionist's eye might have read the germs of a ripe situation. Unfortunately, though, his visit ended a month too soon, and we abandoned that line of speculation.

One also has to consider, apart from these objective factors, the state of Bakunin's mind. He was on the run, moving incognito, jumping at shadows - certainly, after twelve years' mind-killing and body-racking imprisonment, in no mood to take chances. His identity seems to have been known to his fellow-travellers at the Yokohama Hotel, and he must have feared exposure. It was difficult enough for any foreigner, let alone one looking like Bakunin, to disappear in Japan (and remains so today). His heart, moreover, was already speeding towards London and the revolution in Europe, and he was little disposed to take careful note of the things around him, Thus, despite the strangeness of the surroundings, and the quaint popular customs he could have found had he looked (it seems certain that he must have heard many fascinating stories from Heine), to say nothing of his being in a country whose capacity for revolution was entirely unknown, Bakunin has left no impressions whatever of his stay. This omission is made all the more startling by the fact that Herzen, who after Bakunin's return to London was obliged to support him, suggested that he raise money by writing the story of his escape from Siberia. Bakunin, it seems, could not be bothered.

Finally, there was one more factor which undoubtedly lent wings to Bakunin's heels once he managed to leave Siberia This was the story of the Bakhmetiev Fund. Since the story is related in the major biographies of Bakunin there is no need to go into detail here. In 1858 a Russian landowner named Bakhmetiev had disposed of all his property and gone to London to contact Herzen. His idea was to buy a small island in the Pacific and there set up a utopian community. Before leaving he had left with Herzen a sum of L800 to be used to further the Russian revolutionary movement. Bakhmetiev himself was never seen again, but the money was paid into a joint bank account in London held by Herzen and Nicholas Ogarev, to await a time when it could be put to good purpose. Bakunin heard about the existence of this money from a letter of Herzen's received before he decided upon his escape, but it would probably be too much to suggest that this was the primary motivation for his return to Europe. At the very least, though, the thought of the money lying untouched in London probably made him want to get back there as quickly as he could. When he did get hold of it it was used for the printing and distribution of revolutionary literature in Russia, principally the pamphlet 'Catechism of a Revolutionary'.

With all these things in mind, it has to be admitted that circumstances did not encourage Bakunin to throw himself into the Japanese political scene. Bakunin, however, in all other situations, was not a man to be Put off by mere objective circumstances. He would be a marked man even after his return to Europe, but that did not deter him from immersing himself in revolutionary activities there. One would have expected that the very existence of the void surrounding him in Yokohama would press him to find out more about it. Perhaps he did; but if so, we do not know, Most of all, had Bakunin any real interest in Japan he would surely have left some record of his visit. As far as can be gathered, he Posted a letter from Siberia before boarding his ship, and another from San Francisco, but nothing from Yokohama. If there was no postal service he could have sent a letter in the charge of one of his hotel acquaintances, as other residents must have done. He never mentions his stay in any of his writings, and actually ignored Herzen's suggestion that he write his memoirs. In our opinion, the time spent in Japan (and in America, of course, where an even bigger case could be made out for his staying longer) was no more than an interlude, a chance to relax before returning to where the action really was: Europe.

Museihushugi: The Revolutionary Idea in Japan

Over the past two years I haven't been able to put as much energy as I would have liked into the regular production of 'Libero'. Apart from having become heavily involved in child-care and other activities as well as having taken on a new and demanding job, much of my time has been absorbed by the compiling of a full-length history of the anarchist movement in Japan. 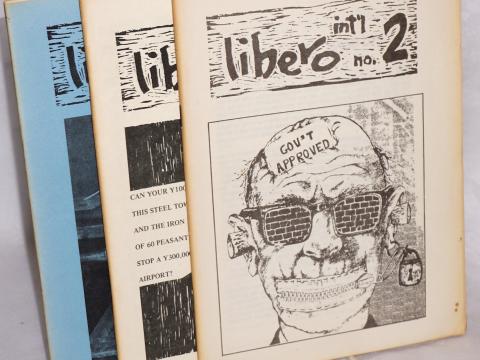 Online archive of Libero International, the English-language journal about Asian anarchism published by the group CIRA-Nippon in Kobe, Japan from…

Phew! After a constipated couple of months, we finally made it with No. 2. Like someone said once, when you decide you want to put out a new paper, you first decide what you want it to be, aim for it in the first issue, and usually miss by miles. Then the second time you take better aim, get a bit closer, and so on. We think we got closer in this second issue to what we originally planned to do, which was to present…

The following letter was sent to us by Mit-Teilung (London), in whose No. 22 (October '75) issue it appeared. Our reply doesn't represent our last word on the subject (especially on "Nationalism," about which we'll be writing more later.) We hope that readers (G. J. included) will send us their comments and criticism.