A river's revenge! Surrealist implications of the great flood

Chicago surrealists on the flooding of the city in 1992.

--Mayor Richard Daley, 13 April 1992, in his first statement to the press on the flood.

"As the offices emptied, there was little sense of the alarm or panic usually associated with major disasters. . .More typical was the humor and even giddiness with which many greeted the unexpected holiday."--Chicago Tribune, 14 April 1992, page 1

"I feel like a kid getting out of school because of snow."--a woman telephone worker, quoted in the Tribune, 14 April 1992

Any sudden end of "business as usual" ushers in possibilities for everything that is neither business nor usual. Every interruption in the "normal functioning" of government and commerce reveals glimpses of a new society that is the very negation of such sorry afflictions. Momentarily freed of the stultifying routine of "making a living," people find themselves confronted with a rare opportunity to live.

In these unmanageable situations, the absolute superfluousness of all "management" becomes hilariously obvious. Uninhibited by the presence of bosses, supervisors and other agents of hierarchical power, those who have rarely been more than exploited victims of a slave system begin to act like free human beings, relying--in many cases for the first time since childhood--on their own initiative, their own resources.

With the chains of authority broken, or at least in disuse, the wonders of solidarity and mutual aid are rediscovered as if by magic. Long-time prisoners of the insufferable workaday world revel in the inexhaustible pleasures of not working. Spontaneously and joyfully, those who have always been "bored to death" reinvent, starting from zero, a life worth living. The oppressive tyranny of obligations, rules, sacrifice, obedience, realism and a multitude of so-called "lesser evils" gives way to the creative anarchy of desire. The "everyday" begins--however fleetingly--to fulfill the promise of poetry and our wildest dreams.

"Poetry is neither tempest nor cyclone. It is a majestic and fertile river."

"I knew there were big problems when we got reports of fish in basements."

For an entire exalting week, with the whole world watching, the Chicago River had the city's central business district at its mercy. The rising of this tormented, much-maligned waterway revealed the fragility and precariousness of the foundations not only of a city, but of a whole society, an entire civilization. With the power off and the lights out, the unruly river showed us how much of what affects our lives is dark and underground and hidden from view. This "freak accident" demonstrated that the seemingly vast and monolithic power of this society's repressive forces is largely an illusion maintained by the ignorance and disorganization of those who are accustomed to being repressed.

In passing, the Great Flood exposed yet again the utter worthlessness of all bureaucracy and statism in solving any fundamental problem. The raging torrents of the river's murky waters thus brought only clarification in their wake.

In a social set-up based on inequality and exploitation, "natural calamities" generally victimize the poor. The Chicago flood, however, hurt only the prosperous and powerful. Businessmen, cops, bankers, politicians and officials of the Board of Trade called it a "tragedy" and a "nightmare," but just about everyone else had a grand old time. Many described it as an adventure that they wouldn't have missed for anything. Thanks to the flood, some 250,000 workers enjoyed at least one extra day off, with pay, and many of the homeless savored their finest meals in years (with refrigeration turned off, restaurant-owners found it cheaper to give food away than to pay for its removal).

From the start this "different kind of disaster," as someone dubbed it, was perceived by everyone but the ruling class as an image or symbol of their own latent urge to revolt.

In the river's subterranean fury every rebel against unfreedom has sensed a kindred spirit.

The river's refusal to stay in its manmade cage will long remain an inspiration for all who reject domestication and other forms of unnatural confinement. In the rising of the river we recognize the eruption and triumph of all that is forbidden, outlawed, suppressed by the enforcers of a racist, sexist, exploitative, militaristic and ecocidal Law 'n' Order. Like the Great Snow of '67, the Flood of '92 is a grand moment in the struggle to resolve the contradiction between nature and human nature. As long as nature is enslaved, humankind cannot be free. An injury to one is an injury to all!

The majesty and fertility of the river is as irrepressible as the desire for freedom. Dreamers of the world, dream like the flood! 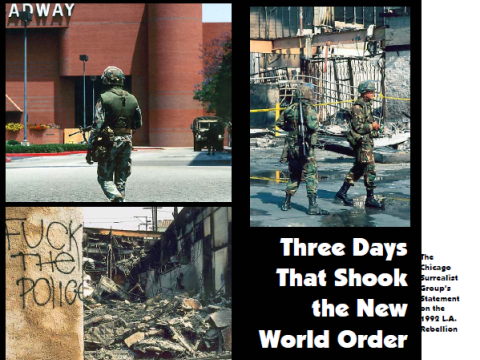