That the economical subjection of the man of labor to the monopolizer of the means of labor -- that is, the source of life -- lies at the bottom of servitude in all its forms, of all social misery, mental degradation, and political dependence;

That the economical emancipation of the working classes is therefore the great end to which every political movement ought to be subordinate as a means;

That all efforts aiming at the great end hitherto failed from the want of solidarity between the manifold divisions of labor in each country, and from the absence of a fraternal bond of union between the working classes of different countries;

That the emancipation of labor is neither a local nor a national, but a social problem, embracing all countries in which modern society exists, and depending for its solution on the concurrence, practical and theoretical, of the most advanced countries;

That the present revival of the working classes in the most industrious countries of Europe, while it raises a new hope, gives solemn warning against a relapse into the old errors, and calls for the immediate combination of the still disconnected movements;

The International Working Men's Association has been founded.

That all societies and individuals adhering to it will acknowledge truth, justice, and morality as the basis of their conduct toward each other and toward all men, without regard to color, creed, or nationality;

That it acknowledges no rights without duties, no duties without rights;

And, in this spirit, the following Rules have been drawn up.

1. This Association is established to afford a central medium of communication and co-operation between workingmen's societies existing in different countries and aiming at the same end; viz., the protection, advancement, and complete emancipation of the working classes.

2. The name of the society shall be "The International Working Men's Association."

3. There shall annually meet a General Working Men's Congress, consisting of delegates of the branches of the Association. The Congress will have to proclaim the common aspirations of the working class, take the measures required for the successful working of the International Association, and appoint the General Council of the society.

5. The General Council shall consist of workingmen from the different countries represented in the International Association. It shall, from its own members, elect the officers necessary for the transaction of business, such as a treasurer, a general secretary, corresponding secretaries for the different countries, etc.

6. The General Council shall form an international agency between the different and local groups of the Association, so that the workingmen in one country be consistently informed of the movements of their class in every other country; that an inquiry into the social state of the different countries of Europe be made simultaneously, and under a common direction; that the questions of general interest mooted in one society be ventilated by all; and that when immediate practical steps should be needed -- as, for instance, in case of international quarrels -- the action of the associated societies be simultaneous and uniform. Whenever it seems opportune, the General Council shall take the initiative of proposals to be laid before the different national or local societies. To facilitate the communications, the General Council shall publish periodical reports.

7. Since the success of the workingmen's movement in each country cannot be secured but by the power of union and combination, while, on the other hand, the usefulness of the International General Council must greatly depend on the circumstance whether it has to deal with a few national centres of workingmen's associations, or with a great number of small and disconnected local societies -- the members of the International Association shall use their utmost efforts to combine the disconnected workingmen's societies of their respective countries into national bodies, represented by central national organs. It is self-understood, however, that the appliance of this rule will depend upon the peculiar laws of each country, and that, apart from legal obstacles, no independent local society shall be precluded from corresponding directly with the General Council.

8. Every section has the right to appoint its own secretary corresponding directly with the General Council.

9. Everybody who acknowledges and defends the principles of the International Working Men's Association is eligible to become a member. Every branch is responsible for the integrity of the members it admits.

10. Each member of the International Association, on removing his domicile from one country to another, will receive the fraternal support of the Associated Working Men.

11. While united in a perpetual bond of fraternal co-operation, theworkingmen's societies joining the International Association will preserve their existent organizations intact.

12. The present Rules may be revised by each Congress, provided that two-thirds of the delegates present are in favor of such revision.

13. Everything not provided for in the present Rules will be supplied by special Regulations, subject to the revision of every Congress.

Minutes of the London Conferance of the IWMA 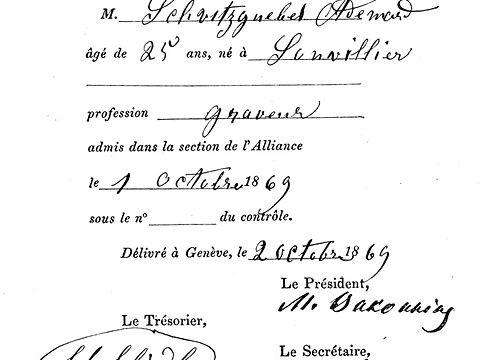 Address to the National Labor Union of the United States