An update on the Vaughn 17, prisoners facing repression for alleged participation in a rebellion that took place in early 2017.

1. All of those who were previously held at Howard R. Young Correctional Facility have been moved to Sussex Correctional Facility. This means that all 17 of them are now together at the same facility. A poster with their updated addresses for writing can be found here. Do continue writing them letters of support as they have expressed many times that it really boosts their morale.

2. While they are excited to be reunited with one another, they have also been experiencing new and intensified forms of repression since their relocation. This repression has led them to go on a recent hunger strike and they are asking for support in the wake of retaliation. An excerpt from a letter received from one of the Vaughn 17 states:

“Despite the appreciation and healing of being able to see my codefendants faces again after the struggles and suffering we endured together at J.T.V.C.C., I believe this transition has turned out for the worst. Why? Because since the arrival of my other codefendants the administration has switched our rec schedule to where we’re only getting an hour and a half every other day unlike the hour and a half we used to get every single day. So basically, our rec hours were literally cut in half from getting ten and a half hours a week to six and a half or four and a half hours a week. Not only is this rec schedule in contrary to CLASI (Community Legal Aid Society Incorporated, CLASI vs. Robert M. Coupe, 2016 US District, Lexis 237 28* 2017 WL 1055741), of what’s supposed to be implemented, but this is a retaliation attack against us. The moment ths new rec schedule was activated we addressed the warden to his face that this wasn’t gong to work. His response was “give me two weeks.” Fourteen of us waited patiently for two weeks and nothing got done, instead we were spinned and lied to as usual. To avoid any more lies and to get what we’re entitled as prisoners, we came together and organized a hunger strike. After about 2-3 days on the hunger strike, staff came to negotiate. Despite us having multiple requests that were reasonable, our man focus was rec because certain people were unable to call their families and attorneys because of the times we came out. After stressing our reasons for rec change to staff, they agreed to change t that following Monday as long as we came off of hunger strike. As a group, we agreed to get off hunger strike for the purpose of getting our new rec schedule. After that, they backdoored us with Class 1 demonstration infractions that carry 5 days hole, 10 days confinement of quarters, and 30 days loss of all privileges, and they still haven’t implemented the new rec schedule. Some already pled guilty to the infraction and some are in the process of appealing. We were hoping that you and your comrades can make a call to our judge and warden.”

3. A phone zap will take place on Monday, September 17th as per their request. A sample script with their demands as well as addresses and phone numbers can be found below. A shareable pdf can also be found here. The script below can also be used to write letters on their behalf.

“Hello, my name is —-, and I am contacting you about treatment of the 17 prisoners charged in connection with the uprising at the James T. Vaughn Correctional Center, who are now being held at the Sussex Correctional Institution. What is their condition currently? Are they being punished for their hunger strike last month?

Additionally, I am calling to insist on seven demands by the 17 Vaughn prisoners.

1. Elimination of the demonstration write-up. Their hunger strike peacefully sought a basic right, which they were denied, namely, 10.5 hours of recreation time per week. It is unjust that they were punished for seeking what is rightfully theirs. The write-up must be eliminated and their rec time returned to 10.5 hours per week.

2. More phone-calls. The Vaughn prisoners are limited to being able to use the phone only once or twice a week, which is inadequate for dealing with the burden placed on them and their families as they face their upcoming trials. They demand phone access four times a week.

5. Hotpot/Microwave: Given that many of staff who assaulted the Vaughn prisoners after the uprising work at SCI and have threatened them since, the Vaughn prisoners have reason to believe that their food is being tampered with. They demand microwaves or hotpots so that they can cook their own hot meals every day.

6. Property review: The Vaughn prisoners have reason to believe that their electrical appliances have been tampered with. Since they do not have electrical outlets, they cannot test them. They demand that their appliances be tested in front of them to make sure they work before they leave SCI.

7. Haircuts: The Vaughn prisoners demand that they receive haircuts before and throughout the duration of their upcoming trials so that they look well groomed and presentable.”

4. Trials for the Vaughn 17 are set to begin in October. If you wish to help coordinate support for trials email folks in philly at [email protected]

While they are excited to be reunited with one another, they have also been experiencing new and intensified forms of repression since their relocation. This repression has led them to go on a recent hunger strike and they are asking for support in the wake of retaliation. 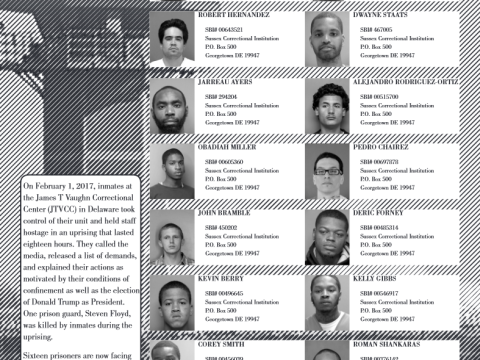 Documents from the 2017 Vaughn Uprising

A collection of documents related to the February 2017 Vaughn uprising in Delaware, when inmates rose up in a rebellion against both their…

An article from the It's Going Down column Bloc Party, discussing the significance of the Vaughn uprising and ways to build solidarity with prison rebels.

Interview with an anonymous inmate at Bertie CI, Windsor, NC about anti-police uprisings and the Black Lives Matter.

Interview with an anonymous inmate at Marion CI, Marion, NC about anti-police uprisings and the Black Lives Matter movement.