A Lesson from the Seamen's Strike

A Reminiscence of Charlie James

First Anniversary of the Ferrer Association

Price, 10 Cents per Copy One Dollar per Year

Anarchism and Other Essays

A Series of essays comprising a thorough critique of existing social institutions and conditions, and giving and comprehensive view of the author's opinions on matters educations, sexual, economic, political and social.

Anarchism: What it Really Stands For

The Psychology of Political Violence

Prisons: A Social Crime and Failure

5. Patriotism: A Menace to Liberty

Francisco Ferrer and the Modern School

The Hypocrisy of Puritanism

The Traffic in Women

10. The Tragedy of Women's Emancipation

12. The Modern Drama: A Powerful Disseminator of Radical Thought

A biographic Sketch of Emma Goldman's interesting career, with splendid portrait is included in the book.

Orders are to be sent, with cash, to

Published every 15th of the Month

We are glad to bring the appeal of the Mexican Liberal Junta, urging our friends to a generous response. The Mexican revolution is of international importance, and no one with a true spirit of liberty would refuse to aid a brave and heroic people fighting for economic emancipation.

To you, as a radical, we make appeal on behalf of this paper and of the Mexican Liberal Party, which is in a life-and-death fight not only with Madero and the world-wide forces of capital, but also with certain Socialist Party leaders.

The Mexican Revolution is in itself an event of incalculable importance, and the action taken by these Socialist Party leaders has made it infinitely more so. They have started an international quarrel that MUST be fought out. The labor movement of the world, and the Socialists themselves, MUST learn exactly where they stand; MUST ascertain, once and for all, whether they are to be the plaything of personal ambitions or are to be given the opportunity of working unitedly for economic freedom.

In that fight you are interested most profoundly, and will wish to do your loyal share. The fight is vital and international, and we of Los Angeles should not be required to carry the whole burden.

Six of our most capable writers and speakers are now if! Jail in Los Angeles, and five are imprisoned in San Diego. They are charged with violating the neutrality laws; for apparently it is a crime not to remain neutral when 14,000,000 of the down-trodden are striking for liberty. Their imprisonment cripples us badly, for the moment.

Twenty-one thousand copies of Regeneration are issued weekly from this office, and go to all parts of the world, including —

despite Madero's rigorous boycott-Mexico. We issue much other educational matter, and our work, especially at this crisis, is vital to the international movement of revolt. But this entails enormous expense, and financial assistance we MUST have.

We ask you to fill out the enclosed slip, writing in the largest sum you possibly can spare, mailing it in the accompanying envelope and doing so AT ONCE.

FOR the moment, and the United obtaining concerned, and financial aid in the United States is the Mexican revolution has been playing in exception-

ally hard luck. Two factors of great weight have been thrown into the opposite scale; the first being the Los Angeles Times' case, which is absorbing the attention of the labor movement, and the second, the industriously circulated delusion that the Mexican Revolution ended with the fall of Diaz.

For this delusion, so welcome to the moneyed interests, we have to thank the Socialist press. The Appeal to Reason led off with an infamous article beginning: "the Mexican Revolution is at an end"; Berger backed it up with the widely-heralded declaration that, even if it were not at an end, Socialists should not support it; Debs supplied the finishing touch by writing in the International Socialist Review that, for the sake of humanity and the prevention of bloodshed, it ought to be brought to an end.

These are the three main factors whom our Mexican comrades have to thank for what is by far their greatest difficulty-the delusion that the revolution is a thing of the past.

THE intellectual eunuchs of the capitalist press represent the most wretched human species in society. They are the bravos of our time who, in return for a few

paltry dollars, sell their very souls. Servile to the insati-

able Moloch of capitalism, these mental hirelings stoop to the lowest depths to seize upon innocent and unsuspecting victims.

The McNamara case furnishes a striking example to what length our journalistic banditti can go. It was a certain Palmer, of Hampton's Magazine, who first helped to prepare the conspiracy against labor and the McNamara brothers. Now it is a worthy colleague of his, a certain Harvey O'Higgins, who gives the finishing touch. In the August issue of McClure's this man constitutes himself the mouthpiece and eulogist of William J. Burns. The very title of his article shows the

"impartiality" of this Burns' champion: "The Dynamiters. a great case of Detective Burns." Even the law considers the McNamaras innocent, till proven other-

wise. Yet Harvey O'Higgins makes himself a party to the cruel, vicious, and deliberate method of manufacturing prejudice against the imprisoned labor leaders in Los Angeles. We are given to understand that Judas Burns is one of the greatest American geniuses.

And, indeed, as an unscrupulous hireling of the murderous capitalist system, Burns is a genius. There are few crimes on the calendar he would hesitate to commit, nor anything he would leave undone, to prove his importance to a society that thrives on crime.

The article in question is one of the worst outrages perpetrated by the press in a long while. It's evident purpose is to prejudice the public mind-and thus the

THE capitalist press perpetuates ignorance not merely through the misrepresentation and mutilation of facts, but even more by the complete ignoring of important events. Thus neither the Associated Press nor Laffan's Bureau has had a word to say about the great peace demonstration of the French Syndicalists and the German trade unionists in Berlin, July 30. Yet it was this concerted solidaric action of the revolutionary proletariat, and not the politicians Kiderlen-Wachter, As-

quith, and Caillaux, that prevented the planned massacre on account of Morocco.

This gigantic demonstration of solidarity on the part of labor (which began in Paris, spread to Berlin 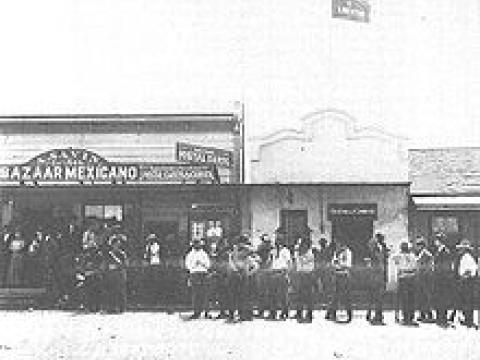 The Magonista Revolt in Tijuana: A Prelude to the San Diego Free Speech Fight

(excerpt from Under the Perfect Sun: The San Diego Tourists Never See; The New Press: 2003, by Jim… 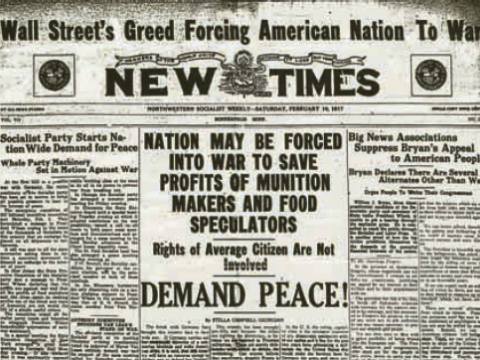 An article by William R. Douglas about the Socialist Party of America and their… 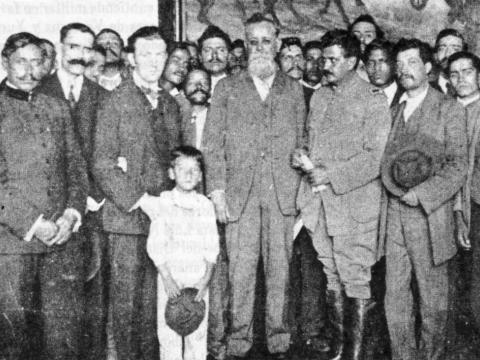 A grave error: the Mexican syndicalists

A short account of the syndicalist union Casa del Obrero Mundial and its failure to relate to the anarchistic movements of Zapata and Villa. 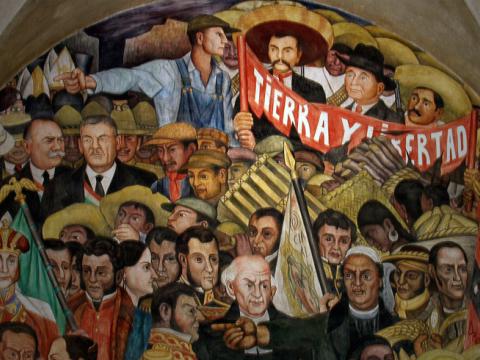