Whats it Got to do with the Bomb?

WHEN THE LONDON COMMITTEE OF 100 was exploring the idea of attacking the government's defence policy at its weakest link, it decided that the Civil Defence service presented the most manifest fraud. Perhaps the worst aspect of it was the perversion of the humanitarian impulses of civil defence workers who were persuaded that they were training to relieve human suffering after the next war whereas in reality they were being used by the politicians to help make their threats of nuclear retaliation credible.

It seemed possible to the Committee that approaches could be made to local councils, who have to administer the civil defence service and help to pay for it from rates, with the suggestion that their efforts were being misdirected and their concern with post-war survival was leading them to neglect welfare needs now.
A supporters' meeting was called in London last October to discuss this idea, and was attended by some people (known to us through their contributions to the Solidarity pamphlet Homeless!) who had first-hand knowledge of the results of finding themselves homeless, and having to rely on the benevolence of the authorities to sustain them at the reception centres and 'half way' houses.

The suffering they described at the meeting confirmed the unease many people had been feeling at the existence of institutions like Newington Lodge, one of the main reception centres, and the civil defence issue was overshadowed by the need that was felt to bring about some public awareness of the housing situation and the predicament of the homeless.

This feeling found expression in the Public Assembly called by the South-East London working group of the Committee of 100, outside Newington Lodge, on the 19th of January. The theme of the assembly was "Is there a connection between the conditions of the homeless and our nuclear war preparations?", and the priorities of conventional "law-and-order" society were attacked by speaker after speaker who protested

BRIAN RICHARDSON, born at Catford, 1927, is an architect who is active in Sevenoaks CND and in the South East working group of the London Committee of 100.

at the expenditure of countless millions of pounds on weapons to give an illusion of defence while basic human needs were being inadequately provided for.

It was an interesting meeting, but in terms of the Committee of 100's belief in applying non-violent direct action it did not go very far. Apart from the groundwork that had gone into the demonstration beforehand, when people from the working group got into the Lodge, saw conditions for themselves and discussed the proposed assembly with some of the inhabitants), there was no direct confrontation of the authorities other than having the meeting on their doorstep.

The working group is still engaged in developing ideas that came from the assembly and from recent writings on the subject, into plans for action. Our imaginations were stirred by the account in ANARCHY 23 of the astonishing Squatters' Movement of 1946, and it does seem possible that something of the same sort could be done now to rectify the absurd situation where people are in over-crowded conditions at the reception centres while there is empty property at hand.* It is just that nobody is taking the responsibility of seeing that an available accommodation is being used in this emergency. Perhaps we should do this, and by labelling and, if necessary, picketing, identify to the public these potential homes.

If a new wave of "squatting" should take these places over, we should be ready to support them by reinforcing their unconstitutional action with more of our own. Other things we can do are to continue to expose the civil defence anomaly of providing welfare after it is too late, and attempt to persuade the personnel to take on relief work among today's homeless, and continue to protest at the gross mis-spending of public funds on the government's futile but sinister defence programme.

Taking a deeper look at the housing situation lying behind the immediate problem of homelessness, we were impressed by the discussion in ANARCHY 23 of the unnecessary restriction of choice in this country of the types of housing available. Because of the Tory Rent Act, privately owned property to let at low rents is fast disappearing, and the young family man is faced with the alternatives of becoming an owner-occupier or a council house tenant.

Supposing decent standards, the first is going to be impossibly expensive for most. In itself it is in many ways desirable, but even if finance can be found, it is not an ideal arrangement for everybody because of the loss of mobility implied by the expense of buying and selling and because of the pressure on a man with a heavy mortgage to settle down at his job and devote himself assiduously to the "rat race".
As for local authority housing, as Stanley Alderson says in his new Penguin book Housing, "the difficulty is in becoming a council tenant. The man who set about it efficiently would get an essential

job, marry young, father a child a year, find himself a slum flat, share it with another family, and develop chronic ill-health. With all these qualifications he could even expect to get a house before he was thirty. In addition to the price he paid in inconvenience (and indeed in the expense of a large family), he would have to resign himself to immobility before as well as after he got his house … the local authority is likely to require several years' residence in the district before it will put him on its waiting list."

Like the owner occupier, the lucky council tenant is put under pressure; he has to conform to the regulations of an official landlord who knows what is best for him and who controls his environment.
The choice that we haven't got (but which is much more common on the continent) is to be able to 'rent' co-operatively owned homes. These can be as cheap as council houses, but have the great advantage that the share-holders can have a direct say in the management of the property. They will tend to identify themselves with the upkeep of the whole corporately-owned group of dwellings and be able to exert an influence on the quality of their surroundings.

No-one, not even the government, denies that a much larger proportion of our new housing should be supplied through the agency of various sorts of voluntary associations, and the principle of financial backing from public as well as private funds has been conceded. The initial organisation of groups of members and the launching of building projects is a complex business, but there exists an excellent body, the National Federation of Housing Societies, 12 Suffolk Street, London, S.W.l., who can give expert advice on these problems and who deserve our active support. The main pressure an aware public needs to bring on the authorities is to obtain the release of sufficient funds for co-operative housing schemes to go on in significant numbers.

Is all this too far from the original idea of the Committee of 100 as a mass movement of civil disobedience against nuclear war? Our bad housing and welfare arrangements come out of the same society, based on the violent enforcement of law and order, as the bomb does. The bomb is not an aberration, but the logical outcome of a way of life largely controlled by arbitrary authority backed by violent sanctions, constitutionally applied.

I suggest that an active response to the day-to-day issues such as housing, by people who are aware of society's mortal disease (of which the bomb is the most alarming, but not the only symptom), and who are committed to non-violent resistance, far from dissipating the effort of the anti-nuclear campaign is necessary for it to go forward.

It has become clear that we cannot shock people into changing their conventional attitudes to life by exposing the danger and immorality of the bomb alone, even though we tell them that their very survival is at stake. This has been attempted, and though the campaign itself still survives, it has not succeeded in getting the profound changes in personal and public attitudes, which are needed.

If the lucid and brilliant exposition of the nuclear situation in the leaflet Act or Perish, with its persuasive exhortation to civil disobedience, and the resolution of the original committee, failed to stimulate massive public support; then the predisposition of the public mind towards constitutional forms and an acceptance of the status quo must be too strong to be overcome by a dramatic challenge on the single issue of the bomb itself, the pinnacle of violence. There must be complementary activity to build a public awareness of the wrongs running right through society, to explode the fallacy of law-and-order obtained by threats of violence and to show new and constructive ways of approaching social problems.

Galbraith's 'private affluence and public squalor' are all round us; we have subtopia; unemployment; homelessness and barbaric prisons, but unlimited expenditure on armaments that can do no good to anyone except (in the short term) their manufacturers. A typical example of the subjection of the welfare state to the warfare state is provided by the pitiful condition that many old age pensioners have sunk to in this country. Peter Townsend's report on the existing institutions for old people, The Last Refuge, was reviewed by a welfare officer of a local authority in his trade-union journal Public Service. (Townsend's book reveals the horrifying conditions in the former work-houses still being used to accommodate old people, and advocates that proper services should be made available to old people in their own homes among the rest of the community). The welfare officer gives grudging praise to the proposals for a family help service to visit all pensioners, plan and manage sheltered housing schemes, improve sub-standard housing, provide shopping, laundry, meals, night attendance facilities and so on, and says, "obviously these proposals are based on the assumption that adequate resources will be available. But it is doubtful whether any section of the social services has ever reached this stage or is likely to do so in the foreseeable future."

People seem to accept it as inevitable that only paltry sums can be made available by the government for the satisfaction of human needs, and fail to react when it is disclosed that fantastic sums are wasted on weapons that are obsolete by the time they are made. It was mentioned in the banned Granada TV programme on defence that found its way on to the BBC, that Sea Slug, for instance, was originally estimated to cost two million pounds, and came into service four months ago, already obsolete, having cost seventy million pounds.

More distressing that the mis-spending of our money is the picture that emerges of a society whose whole system of priorities is upside-down. The people who are not seething with indignation at this sort of injustice are so insensitive to human values that the continued existence of the bomb is not significant for them. We must work for a change of heart and a change in attitudes right through society and at all levels of public activity, from housing to defence. 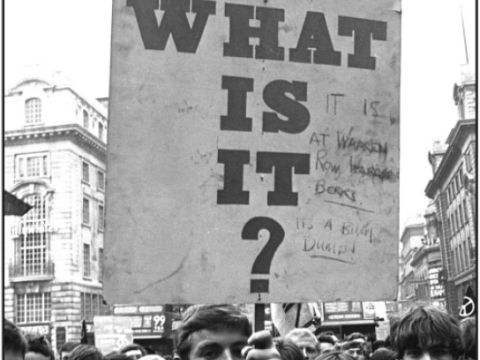 Danger! Official Secret: the Spies for Peace: Discretion and Disclosure in the Committee of 100 - Sam Carroll 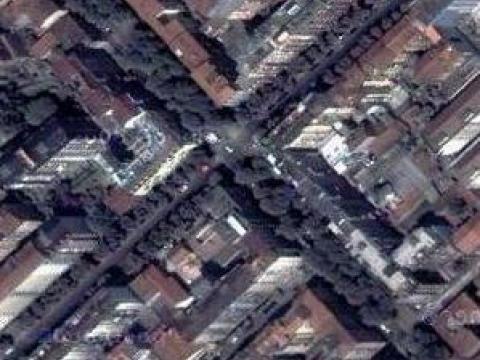 A short history of a militant mass occupation of empty housing in Milan, Italy, 1971 which pressured the government to give in and provide the… 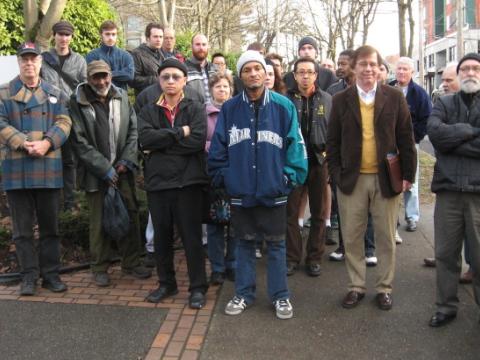