What we oppose is the devotion of the labour movement to the reformist principle, thus gradually taking over from the middle-class do-gooders, and even (as has happened above all in England) letting those people in turn take over the direction of the labour movement politically, on the grounds that they will thus manage to achieve a few parliamentary and other reforms here and there. The result of this action is that in the end we get some reforms, but no social change-over such as the labour movement was originally created for.

The new labour movement we hope as syndicalists to achieve is one that will help to bring about that new society, and will therefore not be one concerned with political reformism. At the same time reforms can be obtained without recourse to parliamentary action. The fact of the matter is that the ruling-class, when faced by its subjects in a revolutionary mood, is only too prepared to give them reforms in an effort to appease them. Through industrial action social amelioration can be obtained, not only in wages, but also in many other concessions – compare some of the strikes in and since the war made for liberty rather than economic gains (railwaymen’s and dockers’ strikes against police action, for instance), When we call ourselves anti-reformists we do not believe we should not act to stop such action. What we say is that a Society for the Prevention of Police Snooping on the Railway will waste a lot of time and achieve nothing. The action of the railwaymen can do the job in one quick strike.

Similarly, although we believe that in the capitalist system it is necessary to achieve wage increases, this does not mean that we believe in the wage system. Whatever we think, the wage struggle continues in the factory in any case. The organisms that arise in the workshop are created mostly on this issue. What we claim is that these organisms should be freed of political control altogether and made instead a movement by which workers’ control of the place of work might ultimately be achieved. As they represent the people doing the job, in them lies the possibility of control being carried out by the workers themselves. Workers’ control can only go hand-in-hand with the abolition of the wages system. The idea of different wage rates operating if workers were controlling different places of work is unthinkable. It is impossible to decide which job merits which rate. Instead we put in its place the principle of common ownership – each taking from the community what he needs and giving to the pool of work what he is able.

Syndicalism is therefore the system of workers’ control which is operated by the workers themselves, and created by the organisms which they build spontaneously in order to fight the wages struggle, but which take over when the wages system ends and the employing caste are no longer dominant. Because, however, we are alive to the dangers of political control, which might replace the capitalist order, we take our stand against all forms of authority, whether it claims to be representing the masses or not. This, of course, is anarchism (“no governmentalism”) and explains the name “anarcho-syndicalist”. Syndicalism, like socialism, has been used as a name by a great many people to cover a great many points of view, but the name Anarcho-Syndicalism has this plain meaning of workers’ control of the places of work, absence of government, and the decentralisation of social affairs to the commune.

What we say is that a Society for the Prevention of Police Snooping on the Railway will waste a lot of time and achieve nothing. The action of the railwaymen can do the job in one quick strike. 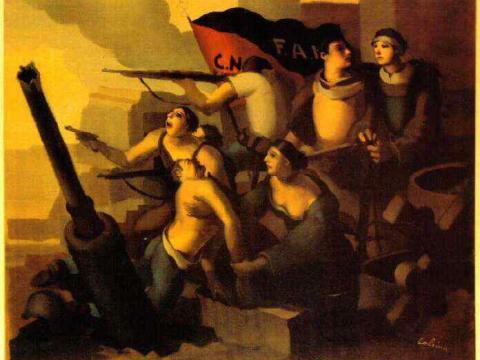 The labour movement in Spain : Albert Meltzer on Spanish anarcho-syndicalism

KSL: Albert Meltzer was a long-standing supporter of the anarchist movement in Spain. One of our… 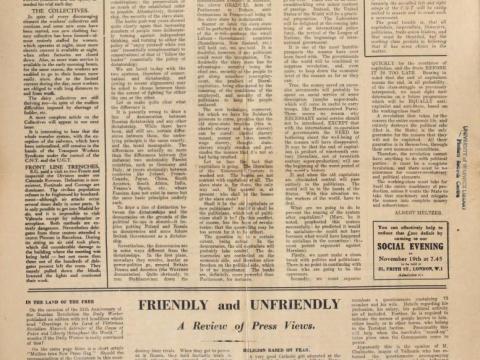 The Future And The Workers. Slave State or Anarcho-Syndicalism? by Albert Meltzer

The economic crises following the last war brought a series of revolutions, none of them successful,…

What is the middle class? - Albert Meltzer

Albert Meltzer writes for Black Flag magazine on the idea that "we are all middle class now".

Slaughter or slander? Notes on the Albert Meltzer-George Woodcock conflict

London anarchist Albert Meltzer was a longstanding critic of non-revolutionary and ‘intellectual’ trends described as ‘new anarchism’ or ‘militant liberalism’ (depending on your point of view). Part of this was his conflict with the Canadian writer George Woodcock. I want to examine that conflict and when and how it arose in particular.