libcom has just heard that a hearing at Shoreditch County Court has resulted in an eviction order being granted at Dalston Theatre, it could therefore be evicted any time after 7pm this evening.

Nearly two weeks after it was occupied as part of a wider campaign against gentrification and property developers in Hackney, Dalston Theatre remains standing after the occupiers won a high court victory against Hackney Council.

Hackney Council took the case straight to the High Court in order to speed up eviction proceedings and possibly set a precedent for future occupations, but this seems to have backfired as they were sent back to Shoreditch County Court for a hearing that concluded yesterday.

The victorian houses next to the theatre have also been occupied, and the ground floor has been opened up for cleaning up in preparation for turning it into a social centre.

Although the Council admitted that they had already ripped out the staircases in the Victorian houses on the corner of Roseberry Place/Dalston Lane, they claimed there was an exceptional risk of damage to property if they didn't get immediate possession and that time was short to start demolition.

'There is no reason why we should be prevented from doing as we like and... go ahead with demolition' said their barrister.

'The danger is from Hackney, not from us' replied the occupiers.

Despite attempts by the claimants, the judge was not persuaded that it is his jurisdiction to deal with the case in the High Court, as it is necessary for there to be 'exceptional circumstances', of which there were none.

Contrary to the reasoning of Hackney Council, the judge accepted that there is no substantial danger to property or persons in the building, that there is no risk of public disturbance (he stated he could see there is an obvious public interest), that the occupation is peaceful and that it is intended to preserve rather than damage the buildings.

As soon as the judge pronounced his decision against Hackney Council, the claimants announced that they had already arranged a date with Shoreditch County Court which is 10.30am, Friday 3 March.

You can also peacefully show your support for the campaign against Hackney Council's plan to rush through the demolition of these heritage buildings, by going along from 9am onwards on Saturday 4 March to 4 Dalston Lane (corner of Roseberry Place & Dalston Lane). You can help with leafleting and making passers-by aware of the imminent demolition threat. 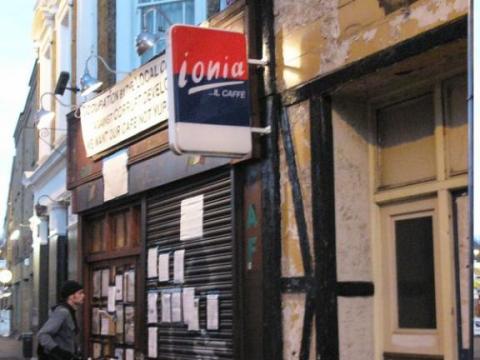 Image gallery from the occupation of Francesca's Café on Broadway Market, Hackney. There was also an occupation of Dalston Theatre, and a…