How long has Moscow ABC been in operation, and what does it do?

There were previous anti-repression groups, but first incarnation under
label of ABC-Moscow was set up in 2003 as a coordinating organ between
existing groups, but around 2005 it had degraded to state of mere
internet project. Around 2007, group was reorganised as an autonomous
entity, and has been around ever since.

Most of our activity is spreading information and solidarity calls, and
raising channeling funds in benefit of repressed anarchist anti-fascist
comrades. Occasionally we organise letter-writing and other such events.

Are there many groups affiliated with you in Russia?

It is hard to say, as usually anytime when problem arises in some city,
people come together and organise under banner of ABC on a temporary
basis. However, besides Moscow I would say only Saint Petersburg has
some more stable group.

What is the latest on Artyom Bystrov?

Court against Artyom and three other Nizhni-Novgorod anti-fascists has
began, but this far there has been only more technical hearings.

In America, anarchist groups get harassed and set up by the state often,
but on average, Americans do not let openly fascist groups operate
freely, and although antifa is not common, it is usually supported by
the public. How does that compare to the situation there? Is anarchism
or antifa popular in Russia?

Unfortunately, most Americans probably think “Russian ultranationalists”
are fictional terrorists from a “Call of Duty” video game…how would you
describe an average Russian fascist?

I think it makes sense to answer these questions together.

For the beginning, there is no such thing as “an average Russian
fascist”. Far-right in Russia has every possible tendency and tactic
represented, there are orthodox christian fundamentalists, Nazi pagans,
secular national socialists, third positionists,
“anarcho”-nationalists, subcultural Nazi hardcore punks, national
bolsheviks, Russian (ethnic) nationalists and supporters of “all-white”
solidarity, some prefer legal means, others prefer bombings and murder.
At times, they hate each other more than anti-fascists or migrants, at
times, they manage to unite for “common goals”. Even amongst those
preferring most violent methods, many position themselves as
“apolititical racist democrats”, that means, they prefer parliamentarian
system but for exclusively ethnic Russian (or white) people. Really,
“fascist” and “far-right” are just umbrella terms for a huge variety of
tendencies, without much common denominators. Most are not personally
ready for any kind of armed struggle, but ideologically big part of the
far right is either positive or ambivalent towards it.

According to opinion polls, up to half of the people may support some
aspects of far-right program (curbing migration, “Russia for Russians,
Moscow for Moscovites” etc.), just a minority is supportive of the
far-right movement. However, although majority of the people is against
far-right, antifa is associated with street violence and other illegal
means of action. And this perception is right – there is not really
anything like legal antifa in Russia. This is why majority of people is
against antifa, although it is hard to say for sure.

Anarchist movement is maybe more known in Russia than in any other
country without substantial current anarchist presence in politics, as
anarchist characters were common in Soviet movies and books (most
commonly portrayed by drunken sailor, mad bomb thrower or a bloodlusty
Makhnovist). However, I would not say that population is especially
symphathetic to anarchist ideas.

This subject raises a hot issue in America, which is violent anarchists.
Of course, anarchists were very influential creating Occupy Wall Street,
a nation-wide non-violent movement, who then were attacked by a national
conspiracy of assaults and kidnapping by the state, only for the media
to come out and brand anarchists as being too violent! Is there a
problem with violent anarchists in Russia, or is it propaganda?

It is neither, as anarchists in Russia are not making much impact in
terms of violence. In Northern Kaukasus, there are in average more than
1000 armed incidents each year (bombs and shootouts) for which
authorities blame armed islamists – for sure some of these are in fact
some business or mafia conflicts, but still bombs and shootings are a
weekly issue. There are also 1-2 racist murders each week. In this
contexts, anarchists smashing something each 3 years is not much.
Nowadays anarchists also burn things and occasionally even bomb
something, but it is still a rather small-scale in comparison with
islamist and far-right mayhem.

Anarchist street protests seldom turn violent in Russia, due to strong
police presence. For example, in Moscow there are 2000 full-time riot
police, 50% of whom are on duty all around the clock. During Duma
elections, more than 50 000 riot police, police, internal army, police
students, civil volunteers and private guards were on duty in Moscow
only. Violent protests is also heavily legally persecuted – not as
heavily as in US though. I think, that in case of a serious economical
downturn, there could be same kind of dynamics in the streets as in US,
no matter then uneven odds. But unlike US and Western Europe, Russia has
pretty much recovered from the current economic crisis, due to
flourishing oil exports. This could change however, if Western Europe
fails to buy oil with current prices one day.

Have you been involved in the Anti-Putin movement? What is it like? Does
this movement have any other interests, such as fighting fascism,
corruption, and economic inequality?

It would be more correct do describe movement as “movement for fair
elections”, as according to polls there are even people involved who
voted for Putin or United Russia, but who would prefer more fair
elections (although they are a small minority for sure).

Of course most of anarchists have participated to these protests.
However, in general there is definitely no interest to fight fascism, as
far-right is a visible and important tendency in the protests. Economic
inequality is also not a theme – judging from outlook of the protesters
in Moscow, many people are rather well off. Many of the demonstrators
openly support Mikhail Prokhorov, a multi-billionaire hard-line
neoliberal candidate for a president, who believes there is not enough
economic inequality in Russia.

Anti-corruption is on the agenda though, as a matter of fact, most
popular Russian far-right politician Alexey Navalny has made his career
mostly by anti-corruption campaigning. At this point, anarchist calls
for a more wide, radical and social program have had absolutely no any
impact to the general movement. However, in many cities anarchists have
been a very visible part of the protests.

What do you all think about Food Not Bombs and Occupy Wall Street here
in the states?

I think Food Not Bombs has been a big inspiration for many people in
Russia, for huge amount of people it has been a gate to a more general
anarchist movement. I think there could be some differences , for
example in Russia most homeless are in such a bad mental and physical
condition, that there is no really chance to have them self-organise, in
such cases Food Not Bombs may just provide humanitarian support. Also,
in many Russian cities there has not been success in getting donations
or dumpstered food for FNB, so it relies on money of participators
themselves.

Occupy Wall Street has also been a big inspiration, there is also
“Russian Occupy Movement” (their website nextweact.org seems to be down
now though). However authorities in Moscow and I think in pretty much
all other Russian cities have a zero-tolerance policy towards any
standing demonstrations, ever since such strategy was successfully used
to topple pro-Russian power in Ukraine in 2004. For example, day after
presidential elections 5th of December, some protesters attempted to
stay in Pushkin square after end of the legal demonstration, but they
were immediately nicked. So in order to pursue such tactics in Moscow,
you need at least thousands, if not tens of thousands of people for
starters. But maybe some day it will work out.

If someone wanted to come join you, could they? Would they need to take
precautions?

ABC-Moscow is not really a group which recruits people. However if some
known and trusted person in Moscow anarchist movement wants to join, we
propably let him/her to join. Personally I do support an open model of
organising, and there are groups to which we would direct previously
unknown people, if they contacted us and wanted to join. For example
Autonomous Action of Moscow, which I am also a member. Every candidate
is screened and met at least once before invited to a meeting of
Autonomous Action of Moscow.

What is the best way to support Moscow ABC and/or Artyom Bystrov?

To put it shortly – support actions and material support. If you are not
into a ritualistic protest in your local consulate, mess with your local
racists, or think about whatever kind of actions, which would both make
local impact but be used to raise awareness about problems of anarchists
and anti-fascists in Russia.

If you want to directly contact or donate to Moscow ABC, please check
out the links on the previous post about them.

Moscow ABC, thanks for your insight, and good luck!

Maksim Smolnikov, a street artist known as Hadad, from Khabarovsk has been remanded for two months due to his 2018 VKontakte post about the explosion at an FSB office in the Arkhangelsk region. Smolnikov is accused of "justifying terrorism." During these two years, the security officials had no complaints against him. .
Image 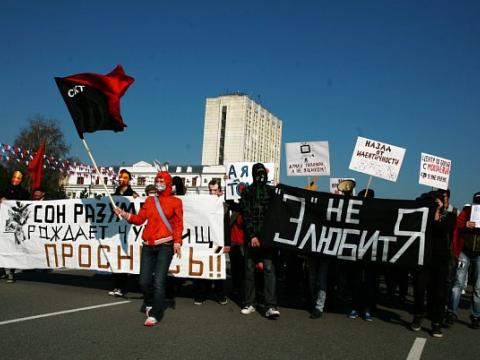 Siberia: interview with a member of the SKT

In connection to the SAC's 100th anniversary in the summer of 2010, Stockholm was visited by a delegation of 4 activists from the SKT, the…

On April 19, the North Caucasian District Military Court in Rostov-on-Don convicted an anarchist from Evpatoria Yevgeny Karakashev in the case of Calls for Committing of Terrorist Activity in the Russian social network "Vkontakte".