The first weekend of September in Geeece saw the bare teeth of class antagonism in defiance of the ever increasing police brutality and unaccountability.

On Saturday 5/9 the inauguration of the 74th International Expo of the city, a site for government speeches and promises was met by thousands people taking to the streets in an "independent class" protest march, separate from the party-controlled marches of PAME and the GSEE. The march was led by PEKOP, the Athens Cleaner's Union whose gen. secretary, K, Kouneva, was attacked with sulphoric acid last December by company thugs. In its call to the struggle PEKOP had announced:

"In the dark days that they are preparing for us, lets get ready, lets organise and lets hit back without delay with a warm autumn and a hot winter. We do not forget December! We do not forget the bullets that killed Alexis, nor the acid that burned K. Kouneva, PEKOP's gen. secretary! We live social war everyday here. And Konstantina is the flag of our social struggle [...]
We shall not be the tail of the bureaucrats who constantly team up with the bosses and the State, alloting like 'parties of power' the priviledges of class collaboration, having the audacity to speak in our name, in the name of the working class, stabbing the back of our struggles. Nor will we give ground to those who constantly want to control us, to transform our struggles to votes, and when December comes they cross to the other side of the river...The workers must march and struggle against the bosses without false mediators and good-willers of this or that bureaucracy. The emancipation of the working class is the work of the working class itself!"

The march followed the usual circular pattern from Kamara and back with several CCTV cameras destroyed en route. Upon returning to Kamara a limited melee with the cops occurred when some comrades attacked a riot police team with flares, leading to a tear gas counterattack and small skirmishes in the surrounding streets. The revengeful motorised police then sought to apprehend 15 members of AK who were returning banners to their social centre. The same group of motorised cops then attacked another AK social centre with tear gas. The AK members were released after more than 150 protesters surrounded the police station where they were detained.

Meanwhile, in Athens Exarcheia, the anarchist enclave in down-town Athens, was once again transformed into a battle zone after policemen tried to stop and apprehend two people doing graffiti in the outskirts of the area on Friday 4/9 early in the morning. When people ran to help the arrested graffiti boys, the police pulled guns against them, aggrevating the crowd. The reaction to the police harassment then led to a full riot police attack on the liberated park of Navarinou, only meters above the site of A. Grigoropoulos assassination last December. Soon pitched battles broke out between anarchists and police forces. During the clashes 5 people were arrested and four are accused of molotov cocktail throwing even though not a single molotov fell that night. One of the arrested was seriously injured and has been hospitalised. In addition three policemen were reported as injured and two police cars were seriously damaged.

New clashes erupted the following night, when riot policemen stationed near the liberated park came under molotov cocktail fire. Soon the area was engulfed in flaming barricades that hampered the intrusion of motorised police in the area, with several cars torched. Riot police forces were reported to throw back stones to the crowds. 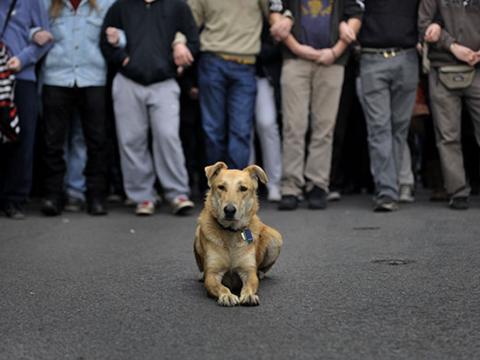 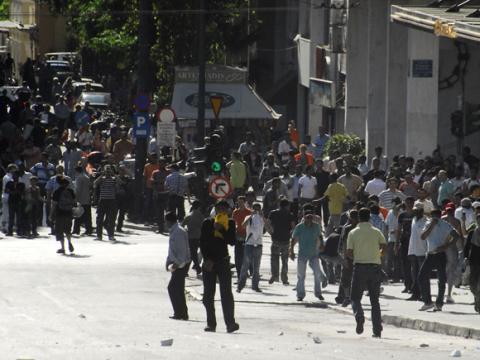