The Vaqueros Navarra factory in Tehuacán, Puebla will never make another pair of jeans again following the victory of the leftist Frente Auténtico de Trabajo (FAT) over the corrupt unions in workplace elections.

Employees became suspicious when upon returning from a Christmas break (which management had extended to 21 January without offering extra pay), they were locked out, told that the factory's doors had not been ordered open. Two days later, the workforce - comprising of at least 450, the majority of whom are indigenous women - learnt of their universal redundancies.

The factory's owners, Grupo Navarra, failed to give an official reason for the closure, although their manager had informed workers that operations would cease in the maquiladora in the event of the success of the FAT-affiliated 19 de septiembre in union elections last November over the corrupt CROC and CROM unions, both run by a cabal of local gangsters and representatives of the PRI (Partido Revolucionario Institucional [Institutional Revolutionary Party]).

It now seems probable that orders (Navarra's clients include Levi, Gap and Abercombie & Fitch) are being diverted to other factories owned by Grupo Navarra in the area with CROC representation.

The closure represents a huge defeat for the workers, exarcebated by the stalling of the Puebla state labour arbitration panel in recognising the FAT as title-holders to the factory's workforce. Grupo Navarra are also delaying severance payments, although the FAT is locked in ongoing negotiations aimed at securing them. Whether these workers will ever regain employment, let alone associate with another 'radical' union in a country where mainstream unions are irrevocably entwined in local government and illegitimate bureaucracies, however remains uncertain.

Bangladeshi workers in clothing sweatshop in Athens, Greece, were attacked by company thugs for refusing to work on Sunday. When their co-workers walked out in solidarity, the company fired 120 out of 180 of the working force. In response the workers have sealed the factory off forcing the company to withdraw the lay-offs and negotiate.
Image

The resurgence of unrest in the Bangladeshi garment sector continues with over 500,000 workers now…
Image 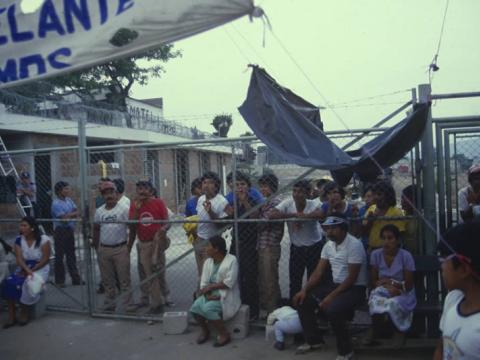 Detailed account of a lengthy strike by textile workers in Guatemala who risked lockouts and death to maintain their working conditions.