The occupation started as of yesterday (15 February) and is a preliminary attempt to reclaim all the schools organised by the 5,000-strong Sección 59, created by the PRI (Partido Revolucionario Institucional) Oaxacan state government and the SNTE leadership in Mexico City in an attempt to defeat the strikers in Sección 22 and thereby the 2006 uprising.

The Mexican press reports a guard of 500 teachers around Secundaria Técnica 199 in the town of Juchitán de Zaragoza in the Istmus de Tehuantepec area near the Chiapan border in southeast Mexico. Ulises Ruíz, the almost unbelievably unpopular priísta state governor, is attempting to defuse the situation, talking instead of a "permanent dialogue" between local authorities and the teachers, but judging by the state's response to events in 2006 (in which an estimated 25 people died and thousands were arrested), the teachers are likely to meet resistance imminently.

Sección 22, which claims a membership of around 70,000, also participated in a demonstration in the zócalo (central plaza) of Ciudad de Oaxaca, calling for the release of prisoners still held from 2006, the return of Sección 59 institutions and new elections within the SNTE. The fracture within the teachers' union is almost inconceivable: Elba Esther Gordillo, its leader, is a close friend and public supporter of Felipe Calderón, the Mexican president whose 14 month term has been marked by a crackdown on social movements, most notably in Oaxaca and Chiapas.

As for Gordillo herself, as well as forming Sección 59, she openly called on SNTE members to return to work in the midst of the Sección 22 strike, leading to the recent formation by Sección 22 and their supporters of the CNTE (Coordinadora Nacional de Trabajadores de la Educación - National Coordinating Committee of Education Workers). 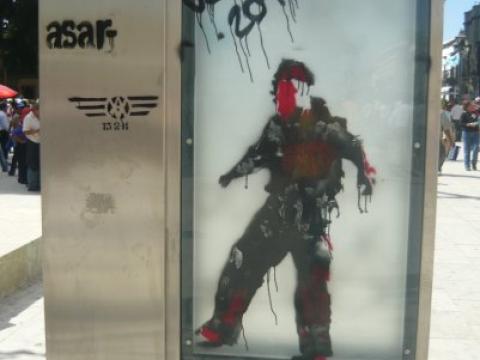 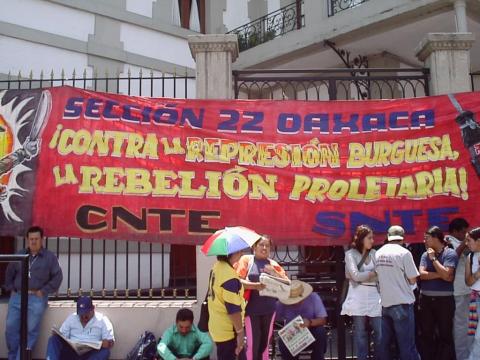