In Summer 2022, mathematicians of the world are going to convene to mark
the achievements of our colleagues and discipline on the whole during
the International Congress of Mathematicians scheduled to be held in
Saint Petersburg, Russia. This event is of utmost importance for the
global mathematical community. Freedom of association, open scientific
cooperation between academic communities from different nations, and
political neutrality are all cornerstone values that the Congress is set
to secure for all mathematicians, which is why we laud the decision to
hold the Congress in Russia and make it possible for hundreds of our
colleagues to participate. Yet one of Russian mathematicians is deprived
of this opportunity on political grounds by Russian authorities — in
contrast to the very values that IMU holds dear.

We are referring to Azat Miftakhov, a graduate student at Faculty of
Mechanics and Mathematics of Moscow State University and an anarchist
activist, who has been unlawfully incarcerated by the Russian
authorities since February 1, 2019. Accused of breaking a window of a
local office of Russia’s ruling party, he was initially detained under
charges of attempting a terrorist attack. Thanks to the prompt reaction
of civil society and the global mathematical community, this charge was
dropped by the state prosecutors, but Miftakhov was nonetheless
convicted of committing “hooliganism” and sentenced to six years in
federal prison — the term he has been serving to the present day. As of
now, he is forced to work on a timber mill despite health conditions and
is refused access to the recent English-language mathematical publications.

Facts leave no doubt about the political motivation behind his
persecution. It has been scrupulously reported that Azat and other
detainees were tortured in order to force out confessions (including
threats of penetration with a screwdriver); authorities pressured Azat’s
family in the course of criminal proceedings. The whole indictment is
based solely on the testimony of a “secret witness” that fails to stand
up to public scrutiny. In addition, there was an apparent smear campaign
against Miftakhov in jingoist media, some of them state-controlled, that
involved using homophobic slurs against him and sharing private
information that could not have been acquired in a legal way, such as
leaked intimate photos of Azat or recordings of the phone calls with his
mother.

The Miftakhov case is by no means an outlier: ever since January 31,
2018, when the crime Azat had been accused of took place, Russia’s
Federal Security Service (also known as FSB) only doubled down on its
crackdown on people with anarchist views in Russia. However, the
academic community in general has since become the target of mounting
pressure or even outright repression from Russian authorities. There is
a long list of Russian scientists arrested by FSB for alleged treason or
espionage including Valery Mitko, Valery Golubkin, Viktor Kudryavtsev
and many others. The repressions against Russian scholars are not
limited to the natural sciences, with a sociologist and a rector of a
major Russia’s non-state university Sergei Zuev being among the most
recent victims.

Without taking a more steadfast and active stance on the matter, the
call for Miftakhov’s release would fall upon deaf ears and result in no
action on behalf of the Russian government, like the call of the 54
Russian academicians fell. Simply letting the FSB officer Dmitry
Derevyashkin to be listed as a co-organizer of the International
Mathematical Congress (ICM) and allowing the Prime Minister of Russia
Mikhail Mishustin to promote himself on the ICM official twitter
account, while Azat is kept incarcerated and forced to work on a timber
mill in lieu of doing mathematical research, is an act that goes against
the values of political neutrality and professional solidarity that IMU
is built upon. We agree that boycotting scientific events is
unacceptable, but neither is continued collaboration with the very
people and organizations who perpetrate political persecution of
scientists in our country. This is why we support the idea expressed by
Ahmed Abbes and Cédric Villani and call for IMU to do something it has
once had the bravery to do in response to repressions against fellow
mathematicians — that is to defer the International Congress of
Mathematicians to the moment Azat is released from prison or his case is
reviewed in a process that respects his constitutional rights. Moreover,
we believe that the Congress, being held in Russia, must include a
sectional panel on mathematicians in danger, such as those persecuted on
political grounds by authoritarian regimes, which would be open to the
public and widely covered by independent journalists.

Azat’s sentence is expected to end on December 5, 2023, which makes it
completely possible to preserve the kind of celebration ICM is for
everyone, not just those lucky not to be arbitrarily persecuted by an
authoritarian government.Reluctance to act would be a scar upon the good
name of IMU as a professional organization committed to the values of
scientific freedom and political neutrality.

Signed by 101 Russian mathematicians, including 24 non-public
signatories whose names we are withholding for their safety and protection.

A brief timeline of the anarchist movement and anarchist activity in the USSR, and its repression by Soviet authorities following the Russian Revolution.
Image 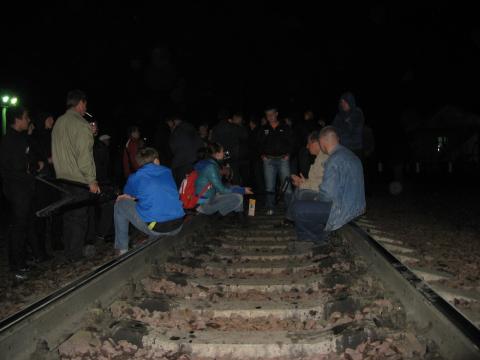 On the night of May, 8 a powerful explosion ripped through the Russia's largest coal mine Raspadskaya near the city of Mezhdurechensk, Kemerovo…