Tube workers to strike over harrassment

Workers are set to strike over management bullying and the sacking of two colleagues.

London Underground workers on the District and Northern lines will begin a 24 hour strike on August 22nd.

The Northern Line workers are demanding the re-instatement of Jerome Bowes, a Customer Service Advisor at Elephant & Castle who was fired after defending himself when attacked whilst on duty on New Years Eve. Bowes had broken up an fight between two men, but was punched in the back by one of the men as he walked away. He broke a bone in his wrist when striking back. Despite there being no complaint or police action against him, and despite witnesses stating that Bowes was in the right, London Underground Limited still saw fit to sack him.

The RMT East Ham group is striking against the unfair firing of Sara Hutchins. A mass meeting about the action and on how to step up the fight against management bullying will take place at the Friends Meeting House on the 19th August.

Tube workers are also being balloted over the sacking of Mo Makboul, who was fired after allegedly swearing at a customer, who then later stated that he didn't. CCTV evidence supported Mo, and despite the contradiction, he was still dismissed.

The strikers complain of harassment and bullying throughout the network, especially over sickness, and the cite the sacking as examples of management intimidation of workers.

Tube workers stuck in solidarity with Bowes last month. As if to underline their case, the RMT picket was attacked by a man who shouted "you never stick up for white people, do you?", before punching a picketer in the face and attacking another with a traffic cone. 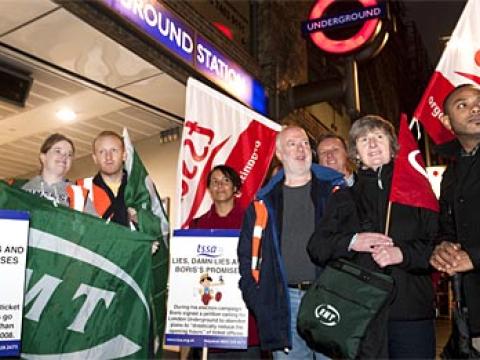