IN 1915 overcrowding gave landlords in Glasgow took advantage and increased the rent and evicted thousands who couldn't pay. In response the women of the estates banded together and chased away the eviction agents.

Since 1885, housing was a major concern for residents of Glasgow, in particular those who relied on tenement housing for shelter. These residents were primarily men who worked in industrial labor and their families. Glasgow received an influx of roughly 70,000 new residents in the three years leading up to 1915. The city did not respond with enough new housing and in fact built fewer than two thousand tenements to meet this need, which created high demand for a small number of apartments. By this time, Glasgow had become the most overcrowded city in Britain. Many landlords, sensing that there was money to be made from this unfortunate situation, chose to increase the rent on their properties to exorbitant rates, often with little to no notice. Landlords promptly evicted tenants unable to pay these increased rents, and because of the housing shortage, landlords were secure in the notion that their properties would not remain vacant for long and they could charge another person or family the higher rate.

A rent strike began in Govan in March of 1915 when a landlord attempted to evict a woman, whose husband was a soldier, based on a debt which amounted to one pound. However, the landlord’s designated evictors were unable to carry out the eviction because hundreds of angry neighbors, led by John Wheately, an active and prominent member of the Independent Labour Party (ILP), blocked their way into the apartment and voiced their outrage in an effort to keep the woman’s housing secure.

Mary Barbour, who led the rent strike to its close, joined the ILP party in 1896, and there learned about nonviolent actions and political protest. Her plan for continuing the organization of neighbors against unfair evictions and rent spikes focused mainly on those people who stayed home all day and had the time for protest: women. Additionally, during wartime men in industrial professions were prohibited from striking, which placed an emphasis on the political action of women. Women were able to organize during the day and discuss strategy so that they could lead large protests and defend their neighbors against evictions. They held meetings wherever they could find space to gather, primarily in participants’ homes.

Both eviction agents and tenants developed ways to deceive one another, and on one occasion an eviction agent lied to a female tenant, telling her that her neighbors had paid the increased rental fee. She paid the rent, but Mary Barbour and her legions went to the eviction agent’s home and demanded the money back from him. He was intimidated by the sheer number of residents who gathered in and around his home, and he returned the money.

During Barbour’s campaign, a single woman who acted as a sentry would ring a bell after seeing an eviction agent in the neighborhood, alerting everyone in the building to come out with their makeshift weapons: flour bombs, rotting food, wet clothes, and other similar objects. In this way, the women deterred eviction agents from entering tenement buildings.

When the residents gathered for protests, Barbour placed special emphasis on looking clean and well-dressed. Barbour wanted to cultivate an image of the working class that the wealthy would find more respectable and civilized, so protesters wore their “Sunday clothes” to gather in public. They also wore cards on their chests proclaiming their grievances and plan of action. One such card said:

The peak of this campaign occurred in November of 1915, by which point roughly 20,000 households were participating in the rent strike. The turning point came on 17 November, when the city cited 49 strikers for striking. Hordes of striking residents gathered outside the courthouse and demonstrated. They protested the citations served to their fellow strikers in an unrelenting demonstration for the entire day. At the end of that day, the strikers had essentially achieved legitimacy in the eyes of the law, and the city dropped all charges against them.

On 25 November, a bill restricting rent increases was introduced and quickly won parliamentary approval. Though this campaign achieved its goal by introducing legislation that would protect tenants from exorbitant rent increases, the law weakened consistently after 1915. 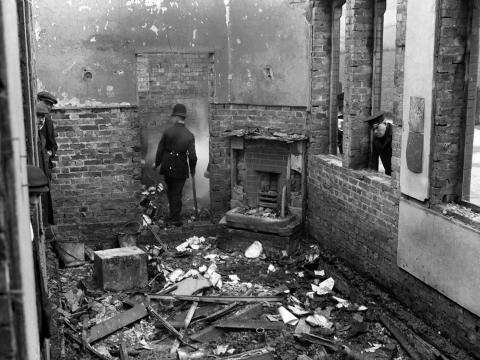 A brief account of some of the many violent incidents in the UK women’s fight for the right to vote in the early 20th century, by Steven Johns.
Image

Interview extracts with women activists in 1970's UK discussing anarchism, feminism and the relationship between the personal and the political. Carried out by Judy Greenway and Lynn Alderson in 1977.
Image