1920: The Sapozhkov uprising and the Army of Truth

A short account of the uprising led by Sapozhkov against the Communist government in 1920.

Alexander Sapozhkov came from a peasant family in Novouzensk county of Samara province. During the First World War, he graduated from the school of ensigns, rose from private to lieutenant and was awarded the medal of Knight of St. George. In 1917 he became a Left Socialist-Revolutionary and took an active part in the revolution in Saratov province. In 1918 he joined the Bolshevik Party and became chairman of the county soviet. Sapozhkov set up a Red partisan group, and enjoyed great popularity among the men of this detachment. He actively defended Bolshevism and participated in the suppression of several peasant uprisings. In February 1919 Sapozhkov becoming Commander of the 22nd Division of the Red Army and from then on was fighting in the Urals and on the southern fronts against the Whites. He headed up the defense of Uralsk from the White Cossacks led by Ataman Tolstov.

In spring 1920 he commanded the Turkestan Division of the Red Army in Saratov and Samara provinces. Most of the commanders of divisions- Zubarev, Serov, Usov - were Left SRs from the local peasantry. These were wary of commanders imposed by the Communists and sympathized with the plight of the peasants. In June 1920 the first part of the Turkestan division consisting of two regiments of cavalry and artillery had to merge into the newly formed 9th Cavalry Division of the Red Army. The military commander of the Zavolzhsky district decided to suspend Sapozhkov from his command under the pretext of sending him to study in Moscow. The order to replace Sapozhkov, Zubarev and others with “military experts” from the officer class of the Tsarist army was met with dissatisfaction in the ranks. On July 1st Sapozhkov disobeyed his dismissal and announced that he remained divisional commander. He wanted his division to be sent to the Turkestan front rather than going to the western front to fight the Poles. On July 13, 1920 Sapozhkov secretly left Buzuluk village, the division headquarters, and convinced the regimental commanders that “unreliable, governmental” commanders and political commissars should be arrested. At first the mutiny was to express dissatisfaction with the choosing of appointed “experts” and no blood was planned on being shed. In parts of the division the slogan "Down with the specialists!" was raised. On the morning of July 14th the division raised the banner of revolt and proclaimed the formation of the First Red Army of Truth under the leadership of Sapozhkov. In this army there were up to 4,000 fighters, among which the Red Army divisions made up two-thirds. The Army of Truth has 4 guns and 45 machine guns.

2,000 Red Army soldiers were disarmed at a first engagement. Half of these joined the Army of Truth. In Buzuluk the rebels released inmates from prison, seized 310 million rubles, and dissolved the local soviet. Communists and Soviet officials prudently fled the city so there were no killings. Soon, the Army of Truth was marching towards the cities of Uralsk and Pugachev.

The Army of Truth was well armed, supported by the local population and constantly replenished by new volunteers, including deserters from the Red Army. Deserters and soldiers from the Red Army were organised into the Chapayev Division. After the capture of Buzuluk Sapozhkov even thought to talk with the commander of the Trans-Volga district for armistice terms and the demands of the insurgents but the District Commander did not answer the telephone. Shortly after Sapozhkov decided that the time for talk had passed. Sapozhkov addressed a rally of local insurgents in Buzuluk with the slogan "Down with the dictatorship of the Communist Party!” He called "for the revolution and the Red Army, but without the tyranny of the Communists" for "Truth" with a capital letter against the injustice of the leaders Lenin and Trotsky. He advocated a "true Soviet power and the Third International”. He appealed "to all workers and the Red Army” and against the “bourgeoisie entrenched in Soviet institutions” and the “pseudo- Communists”.

Sapozhkov said that in Soviet institutions there were "entrenched enemies of the revolution - the officers and bourgeois," that senior officials of the Communist Party had been “bourgeoisified", that there should be a purge and no further agreements with the bourgeoisie. This was met with consternation in the Bolshevik leadership, which feared that the revolt could spread to other parts of the Red Army. Lenin, in a telegram to the Zavolzhsky district commander,demanded the speedy elimination of the insurgency. Trotsky threatened: " Those guilty from top to bottom should be ruthlessly punished" and ordered the shooting of all rebels taken with arms in their hands. Then members of local organizations of the anarchists, Social Revolutionaries, Left Socialist-Revolutionaries and Mensheviks were rounded-up and imprisoned.

To spread the revolt to other territories Sapozhkov ordered the formation of the Pugachev 2nd Infantry Division under the command of a former brigade commander in the 25th Chapayev Division, Plyasunkov, and sent it to the area of the city of Pugachev. But by July 17, 1920 up to 5 thousand Red Army fighters had come from Orenburg and Samara and the Army of Truth split into two rebel brigades. The 1st Brigade led by Serov advanced on Orenburg, the 2nd brigade under Sapozhkov advanced on Novouzensk. However near this town the Sapozhkov units were defeated and one of its commanders, Dimitri Zubarev, was captured. Zubarev had taken part in the 1905 Revolution, for which he received 3 years in prison and a year of disciplinary battalion. In 1917 he was a member of a Soldiers' Committee and had opposed the Kornilov putsch. He took part in the October Revolution and the establishment of soviets in Samara province, and fought against the White Cossacks. In 1921 he was shot for participation in the uprising.

On August 3rd the Army of Truth suffered a defeat and lost 400 men killed and taken prisoner. Three days later Sapozhkov again attempted to storm Novouzensk and was again defeated, and then went to the Ural steppes. On August 12 the Army of Truth was defeated once more and its forces seriously depleted with only 150 combatants remaining in the 2nd Brigade. On Sept. 6th at Lake Buck-Baul in Astrakhan Province it was overtaken by a Red Army detachment. During the ensuing battle Sapozhkov was killed. His body was beheaded and his head was taken to the division headquarters. 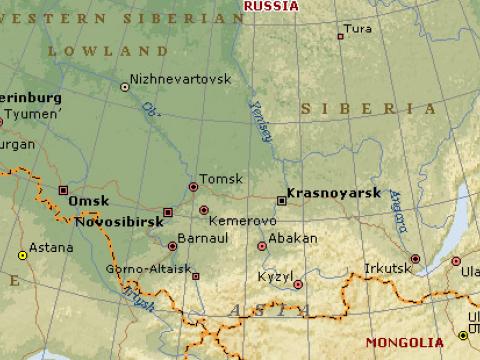 A short account of the West Siberian uprising against the Bolsheviks. 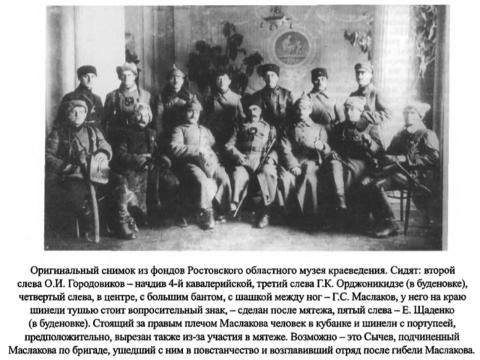 An account of the Maslakov mutiny in the Red Army which threw the Bolsheviks into consternation.