A history of the sit down strikes by predominantly Polish women workers in Detroit during the great depression: part of a national wave of sit-ins.

POLISH-AMERICANS IN THE CIGAR INDUSTRY

Detroit in the industrial age: more than automobiles. In addition to automobile production, the city was a center for stove manufacturing, pharmaceuticals, and tobacco and cigar company growth. The tobacco industry grew simultaneously with the rise of Polish immigration to the United States. When Polish-Americans became the city’s largest ethnic group by the time of the 1920 U.S. Census, the cigar industry had also become the city’s third largest industry by number of people employed. The relationship between tobacco production and Polish women became so strong that some cigar factories even relocated to Detroit’s east side. This area was home to the city’s concentration of Poles, and included the Chene Street neighborhood. As this tie continued strengthening, workers would encourage relatives and friends to begin work in the cigar industry. Polish became the common language of conversation on the factory floor. By 1937, six cigar factories occupied a four square mile area around the streets Milwaukee, Grandy, St. Aubin and Warren Avenue.

According to HistoricDetroit.org, the ten largest cigar producers employed 302 men in 1913. In contrast, these same companies employed a total of 3,896 women, making tobacco production the largest employer of women in the city.

Who were these women? The vast majority of workers were single, Polish women under 20 years of age who lived in very close proximity to the factories. Their income often supported their families. Women cigar rollers were able to earn $25-40 a week, a respectable wage for the time. However, they earned much less than men of the same job. This wage gap can be explained by the union membership of men. (2.)

In addition to unfair compensation between the sexes, there was also no formal training period for new tobacco employees. New workers learned on the job, and it was standard practice for companies to withhold all wages for the first six months until an employee was performing to par. If an employee quit for any reason before this period was over, all income earned was forfeited.

Securing a job was the first of their worries. Workplace conditions of the cigar industry were almost unbearable. Workers.org describes these circumstances: "Toxic tobacco dust was always in the air, with ventilation poor to nonexistent. The few available toilets were of a primitive type or, if modern, dirty and often broken. The factory owners provided no soap or hot water. Sexual harassment from foremen was routine."

Further aggravating factory conditions was the economic disaster of the Great Depression. Following the 1929 stock market crash, cigar worker's wages were cut from 35-50%. The salary of women in the cigar industry was among among the lowest in all of Detroit.

THE CULTURE BEHIND UNEQUAL PAY

Men in business leadership positions hired women because they worked for less compensation than their male counterparts. But some men found the presence in any woman in industry to be a double-edged sword. Kessler-Harris also cites examples of men's fear of losing their jobs to women. Newspapers had a role in rationalizing and spreading this fear. A Newark Star Eagle 1925 reads, "AWAY GOES ANOTHER MAN'S JOB," in response to a woman becoming the secretarial assistant to a senator. This internalized fear justified management's decision to pay women less--it disincentivized them from permanently staying in the workforce.

Why was it acceptable, legally, culturally, and historically, to pay a woman less than a man in the same occupation? Women were not expected to have long-term careers in production industry. Many single woman workers quit their jobs within 2-4 years in order to get married, maintain a household, and raise a family. In turn, these short-term female workers never qualified for a pension, paid vacation, or other job benefits that come with seniority and experience.

In Out to Work: A History of Wage-Earning Women in the United States, Alice Kessler-Harris explains cultural expectations for women that continued to be the norm, even when women were entering the workforce in larger numbers than ever before. She says, "[these women] were expected to find their rewards not in high pay and promotion, but in glamour, paternalistic amenities, and the opportunity to serve." However, Kessler-Harris goes on to say that the working women of the 1920s were not easily satisfied with these assumptions, and often took up their own measures in labor activism. (4.)

Women in the cigar industry often faced orders to roll premium cigars, which required more time and more skill. However, management only compensated for the price of standard cigars. So, workers were making less money in the production of a more expensive product that cost them valuable time. For example, John Jackowski, a 20th century Detroit resident with an aunt in the cigar industry, explains:

“And one thing that they objected to is the owners would ask the ladies to make fancy cigars. But they only paid them the price for production cigars. Another words, cheap cigars and these had to have a certain leaf, leaf was thinner and harder to work with and they [cigar industry management] didn’t want to pay them any more. That was the first union problems they had.”

Before the women organized strikes against the factories, they engaged in other forms of silent protest. Jackowski says,

“…those ladies that worked in the cigar factory, they had friends, men friends, husbands, relatives. They used to sneak out cigars in their bosoms in the you know--generously endowed so they took about a dozen cigars.”

Another method he describes:

I was not able to recover any documentation of disciplinary action taken against women who participated in these acts. Therefore, it is plausible that tobacco management never became privy to these silent methods of rebellion. Types of worker protest such as this was only the beginning to a period of women’s labor activism in Detroit, spurred by the unfair labor practices of the city’s chain of cigar factories.

Lacking a union, with no means to negotiate wages, the women had attempted to ask management for a 10% raise. But their concerns were never addressed. Five days after a successful General Motors plant occupation in Flint, MI, women of the Websten-Eisenlohr cigar company put a plan in motion. This strike was a part of a string of labor activism that began diffusing at quick rates during the early 20th century throughout industrial cities. Goals of the cigar strike included union recognition, a protest of working conditions, and demands for higher and fair wages. Leaders of the strike put up a notice on the bulletin board in Polish announcing the protest, and on February 16, 1937, the women laborers conducted a sit-in.

REACTIONS TO THE STRIKE

Workers.org reports, "In a matter of days the five other cigar companies — Mazer-Cressman, Essex Cigar, Bernard Schwartz, Tegge-Jackson and General Cigar — were also occupied. The women garnered widespread support from the UAW and other Detroit-area unions, as well as local businesses that provided bread, sausage and other food items."

These women had caught the attention of the media and the community, who were supportive of their efforts. The combined strikers from the different cigar companies held a mass meeting at the Dom Polski hall and coordinated a march that would involve all six factories. The Dom Polski was a cultural and organizational center for Poles in the city, traditionally dominated by men, so it is significant to note that these women were able to occupy this space for their own labor and economic agendas. In fact, during the strike, husbands, fathers, brothers and sons all found themselves taking on tasks that were usually a woman's responsibility, like child care, housework, and gaining support outside the plants.

Early corporate succumbers were Mazer-Cressman and Essex, who agreed to the women's demands in early March. But the strikes against the remaining four factories continued into the of March, and Mayor Frank Couzens ordered a breakup. Police force was employed against the women, with notable violence. Policemen dragged women out of the factories and injured a few. This enforcement was similar to the experience of the Flint occupations that occurred before the cigar strike, and illustrate a pattern of police response that was not appropriate to citizens' peaceful protest. The United Auto Worker's union was quick to react to this incident, threatening an automotive-wide strike if police brutality continued. UAW champion Victor Reuther announced his famous two-for-one plan: two new plan occupations for every one eviction of a striker.

All the contentious Detroit labor activity demanded the attention of Michigan's governor, Frank Murphy. With the cooperation of strikers and cigar management, who met for negotiations at the end of April, an agreement was signed. The cigar industry conceded to the women's demands, and a cigar maker's union was established. On May 17, 1937, the Cigar Workers Union Local 24 became active and affiliated with the Congress of Industrial Organizations. (1.) 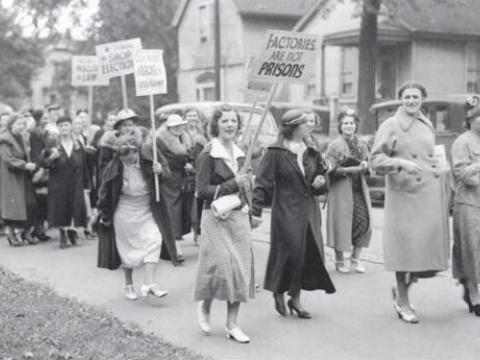 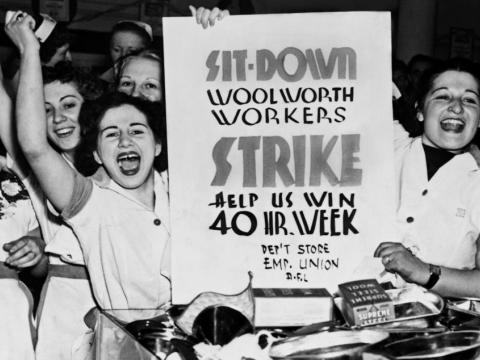 A short history of the sit-in strike of women workers at Woolworth's in Detroit, which shook the…

A short account of women workers' participation in the sit down strike wave which swept the US in 1937. 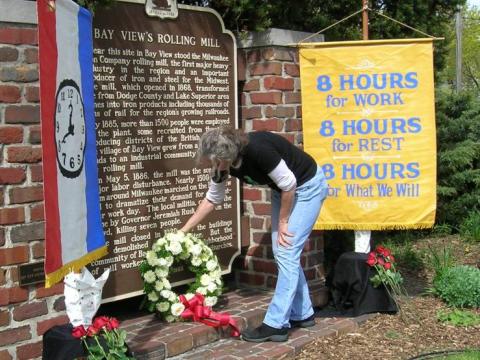