Workers and students in neighbouring El Salvador had driven out their dictator by using a general strike to cripple the regime. That same year Guatemalan workers and students also made use of strikes and mass demonstrations to oust their Dictator.

Beginning in 1931 Jorge Ubico ruled Guatemala with an iron fist with the help of the vicious secret police. He admired Hitler’s tactics. By the summer of 1944, a similarly brutal dictator, Maximiliano Hernández Martínez, was overthrown in the face of a widespread nonviolent campaign in nearby El Salvador. This campaign served as a template for Guatemala’s own movement.

In Guatemala, the campaign began mildly. In May of 1944, forty-five lawyers petitioned the Ubico government for the removal of an arbitrary judge who tried political opponents; Ubico responded by asking for the specific charges against the judge.

A day before the annual teacher and schoolchildren parade in honor of the dictator, two hundred teachers petitioned for a raise. The leaders of the petition were then arrested and charged with sedition. To this the rest of the teachers responded with a boycott of the parade; these teachers were fired.

On June 7, 16 students of San Carlos University petitioned for a change in faculty. Ubico agreed to the students’ demands. These students then escalated their demands. Later, on June 20, opposition groups declared the creation of the Social Democratic Party in a manifesto that supported opposition parties, social justice, and the lifting of the terror and hemispheric solidarity. Two days later, the students wrote a proposition for sweeping university reform, and threatened Ubico with a student strike if these demands were not met within 24 hours. In response to this threat, Ubico suspended the articles of the constitution that guaranteed individual rights, including public assembly. On June 23, both schoolteachers and university students held a strike.

Ubico had once declared that if three hundred Guatemalan citizens asked him to resign, he would. Therefore, on June 24, Ubico was presented with a petition (Memorial de los 311) asking for the return of constitutional liberties and explaining the reasons for the civil unrest; 311 prominent citizens of the capital signed the petition. This document was not printed in the newspaper El Imparcial until July 7, when the liberties were returned. At noon on the 24th, students marched with their arms behind their backs in a peaceful demonstration purposefully passing in front of the U.S. Embassy. That evening, a peaceful assembly called for Ubico’s resignation and the organizers distributed leaflets explaining the movement’s position. That night, the police beat, shot and arrested hundreds during a neighborhood religious and social celebration.

By the morning of June 25, soldiers, cavalry, tanks and machine guns made their daunting appearance in the streets of Guatemala City. Dissent leaders Federico Carbonel and Jorge A. Serrano (who had delivered the Memorial de los 311) were summoned to meet government officials in the National Palace. During this time, demonstrations continued even though the campaigners were menaced with guns and tear-gas bombs. Women dressed in mourning clothes congregated and prayed at the Church of San Francisco in the center of Guatemala City. Once there the women formed a silent, peaceful march. The cavalry fired toward the crowd, killing Maria Chincilla Recinos, a schoolteacher. She became the movement’s first martyr for she was both symbolic and physical evidence of Ubico’s brutality.

By June 26, all of Guatemala City joined in the struggle. The citizens responded to Recinos’ killing by shutting down the economy. Everything closed, workers struck, railway workers joined in a sympathy strike; streets were desolate. The week of June 26 to June 30 the strike, entitled Brazos Caídos (Fallen Arms), took control of the commercial, industrial and service sectors of Guatemala City. On this day (June 26), 50,000 campaigners and supporters congregated around the National Palace urging Ubico to resign at the top of their lungs.

Ubico had respectable members of the opposition followed and their cars taken away. He also ordered the deportation of foreigners who closed their businesses, and the police intimidated business owners to keep their businesses open. Ubico issued a decree stating that all personnel of transportation and communication companies were under military law. But all this was to no avail; the capital was shut down by the general strike. The opposition issued Ubico a letter of unanimous desire that he resign and return constitutional liberties. The dictator’s power was quickly disintegrated; only the U.S. Ambassador and the army remained loyal. Impotent to restore normalcy on the streets or to stop the petitions for his expulsion, Ubico resigned on July 1, 1944.

Ubico, however, handed the government over to a military triumvirate, headed by Federico Ponce. Early in October it became evident that Ponce would not allow free elections to take place. On October 16, students and teachers handed out leaflets calling for a political strike. On October 18, students and workers aided young military officers to seize control of Guatemala City. In early 1945, a new constitution was adopted and free elections were held. Dr. Juan José, a liberal democrat, was named president.

Most of the action occurred during the last segments of the campaign; the campaign gained more momentum once the students and teachers of the San Carlos University became more active.
Edited by Max Rennebohm (18/05/2011) 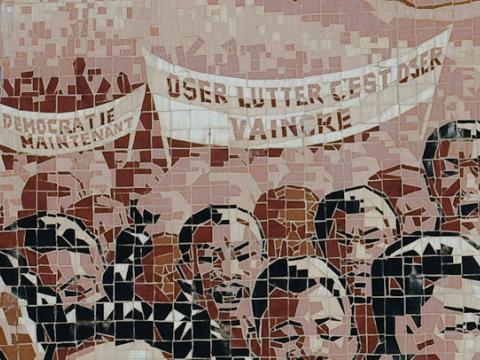 A general strike of the tobacco workers and other unions on May 8th 1936 led to the bloody events of May 9th. The police confronted the massive… 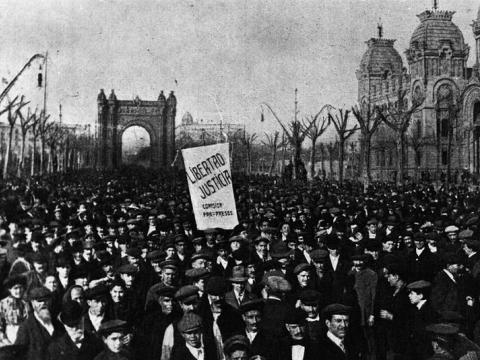