A new report by a US government agency has found that temperatures in 2016 were the highest in 137 years of direct measurements, breaking the record for the third consecutive year.

The annual State of the Climate report is led by the National Oceanic and Atmospheric Administration (NOAA) and based on contributions from nearly 500 scientists from more than 60 countries around the world. It reflects tens of thousands of measurements from multiple independent datasets.

The global atmospheric concentration of carbon dioxide for 2016 was 402.9 parts per million, the highest level in 800,000 years based on measurements and ice core records. The earliest fossil evidence for Homo sapiens (humans) is only 200,000 years old.

"The global warmth was associated with extensive drought, surpassing most years in the post-1950 record and strongly influenced by the El Niño. For any given month during 2016, 12% or more of global land was experiencing at least severe drought conditions, the longest such stretch in the record."
[right]- State of the Climate 2016[/right]

The US government has also been purging information on climate change from government websites, causing scientists and hackers to create independent back-ups.

President Trump has repeatedly denied climate change, calling it a “hoax”, and has vowed to pull the US out of the 2015 Paris Climate Accord, under which states make voluntary commitments to reduce their greenhouse gas emissions.

Rising greenhouse gas levels are closely but not exclusively linked to the burning of the fossil fuels coal, oil and gas. Deforestation and some types of farming are among the other causes.

The latest assessment report by the UN’s Intergovernmental Panel on Climate Change, published in 2014, found that “continued emission of greenhouse gases will cause further warming and long-lasting changes in all components of the climate system, increasing the likelihood of severe, pervasive and irreversible impacts for people and ecosystems.”

Research by the Carbon Tracker Initiative suggests that 80% of the world’s fossil fuel reserves will need to go unburned to keep climate change below dangerous levels.

The fossil fuel industry is vast, with nearly 1,500 publicly listed firms with a combined market capitalisation of $4.65 trillion as of 2014.

This close connection between economic interests and greenhouse gas emissions has previously been described by Jason W Moore, a world-ecologist at Binghamton University, as the atmosphere being "put to work as capital’s unpaid garbage man."

The global warmth was associated with extensive drought, surpassing most years in the post-1950 record and strongly inf luenced by the El Niño. For any given month during 2016, 12% or more of global land was experiencing at least severe drought conditions, the longest such stretch in the record.

The State of the Climate 2016 report 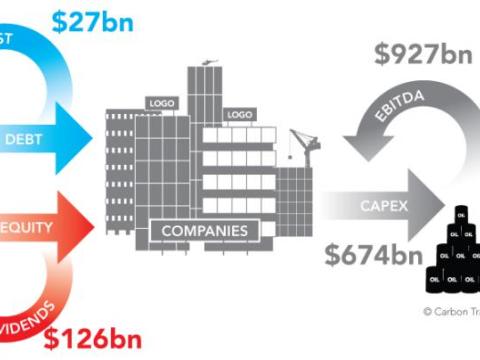