This is a brief outline of the libertarian footprint in the history of Venezuela, prepared by members of the Collective Editorship of El Libertario. We hope that this serves as a useful point of reference for those who are interested in the subject.

The profile of anarchism in Venezuelan history has been less pronounced than in other parts of Latin America, where it has vigorously manifested itself through collective struggles, publications, personalities and ideological debate. It is, however, worth pointing out that it has also influenced our social and cultural evolution

From the end of the 19th Century to the first third of the 20th Century, some local intellectuals were either sympathizers or tolerant readers of anarchism, but nothing like a Flores Magón, Barret, Oiticica, González Prada or other exponents of Latin American anarchist thought (Cappelletti 1990). The few who did explore libertarian pathways produced hardly any written material, and then veered towards positivism or Marxism; it is only worth mentioning Pío Tamayo, who taught the ‘socialism of Bakunin and Marx’ to young anti-Gómez activists in prison until shortly before his death in 1936(Sananes 1987). In terms of popular struggle, historians of the Federal War (1859-63) – the biggest social upheaval between Independence and the petrol era- point out the influence of Proudhon and French socialism on Ezequiel Zamora, General del Pueblo Soberano (General of the Sovereign Nation). The zamorist federal program was clear, “…horror of the oligarchy, freedom for men and lands, social equality”, expressing a radical intent that was only halted by his assassination. (Brito Figueroa 1981)

At the beginning of the 20th Century, European anarcho-syndicalist immigrants contributed towards the emergence of worker organisations despite economic, social and cultural backwardness (Rodríguez 1993). These efforts – formation of mutual societies and guilds, strikes, propaganda etc – gained them a certain notoriety in the era of the oil industry, however the dictatorship of Juan
Vicente Gómez (1908-35) viciously repressed all syndical activity, preventing it from developing as it did at other latitudes. The few hounded social militants that remained in the country tried with great difficulty to generate political thought, whilst the majority of the anti-Gómez exiles were not open to radical thought. Amongst the radical minority, the attractiveness of the expansion of Russian bolshevism proved too strong and effectively stemmed the flow of anarchist thought. When this Marxist faction returned after the death of the tyrant, it occupied the entire field of leftwing politics, absorbing the handful of readers and clandestine disciples of the libertarian ideal, who were even
among the founders of the Venezuelan Communist Party (PCV- 1936) and Acción Democrática (1941), the two parties that would subsequently control the process of the political organisation of the masses. Additionally, the anti-anarchist repression had a constitutional footing and was implemented in the so-called Lara Ley (Lara law) which was in effect between 1936-45.

Many exiled Spanish anarchists arrived in Venezuela during the 1940’s and 1950’s, and had to deal, not only with the weight of defeat in the Spanish Civil War, but also an adoptive environment where their ideas were seen as strange. The urgent need to subsist and the imperative to adapt to the atmosphere of brutal authoritarianism were additional obstacles to the organisation of potential local sympathizers. Their efforts were not, however, in vain, particularly after 1958 when, after ten years of military dictatorship, the Federación Obrera Regional Venezolana – FORVE (Venezuelan Regional Workers Federation, affiliated to the International Workers Association, a global anarcho-syndicalist movement founded in 1922) was established. Too, some specific groups were formed, newspapers, pamphlets and books were produced, but little of this activity transcended beyond the most politically aware circles of Spanish immigrants (Montes de Oca 2008).

The wave of socio-political contestation that was experienced globally at the tail end of the 1960’s – especially May 1968 in France with its indubitable libertarian roots – also took hold in Venezuela. Its mark can be clearly seen in the Renovación Universitaria (University Renewal) that profoundly shook the principal institutions of higher education in Venezuela between 1968-70, and maintained its presence in subsequent student movements and alternative culture. However, apart from the diminishing presence of Spanish veterans, years would pass before groups that identified themselves with the ideal and practice of anarchism would exist, this is because in the 70’s Marxism was still considered the irreplaceable ideological support for any revolutionary proposal in Venezuela.

Between 1980 and 1995 there were clearly anarchist attempts to connect with social struggles and movements, the Colectivo Autogestionario Libertario - CAL (Libertarian Self-managing Collective) being the most visible. Two journals, El Libertario (published by CAL – 9 editions between 1985-87) and Correo A (28 editions between 1987 and 1995), were points of reference and reunion for activists, exiled Latin American libertarians, and, principally, young people who came to anarchism through the punk scene. Also noteworthy at this time was the academic and informative activity of Angel Cappelletti, an Argentinian anarchist who worked in Venezuela for 26 years (Méndez & Vallota 2001). Despite the difficulties inherent in trying to propagate and push forward anarchist proposals of self-management and direct action in an environment where they were either unknown or poorly interpreted, little by little routes towards diverse spaces where such projects could be expressed became apparent. And then on 27/02/1989 the popular rising known as the ‘Caracazo’ occurred, which together with other national events (particularly the crisis of near total dependency on
the oil industry and of the political model that was established in1958) and international events (such as the fall of the Eastern European bureaucracies), opened spaces where the libertarian ideal could be propagated.

The attempt to fuse anarchism with concrete collective struggles was made more apparent by the reappearance of El Libertario in 1995, whose working group called itself first, the Comisión de Relaciones Anarquistas - CRA (Commission of Anarchist Relations), and after 2007 the Collective Editorship of El Libertario. It is the most lasting publication in local libertarian history, publishing 5
editions every year and with a significant circulation compared with other local and continental publications. Side by side with El Libertario are numerous core groups and initiatives with various areas of intervention and which are located in diverse regions, highlighting the working of specific spaces( such as the CESL in Caracas, the CEA in Mérida and the Ateneo La Libertaria, first in
Biscucuy and then in the rural area to the southwest of Lara), the organisation in January 2006 of the Alternative Social Forum in Caracas, the activity of the Anarchist Black Cross, the persistent publication of various informative materials, and the impulse given to distinct events of social protest and cultural agitation. This process has had to overcome the test of the ‘Bolivarian revolution’, led by Hugo Chávez, which for anarchists represents a demagogic, corrupt, militarist and inefficient swindle which has deceived a large sector of local and international socialists, making the development of autonomous popular movements, a course of action promoted by Venezuelan anarchism, more difficult.

A look at anarchism in Venezuela, and its position in conflict both to Chavism and its US-sponsored opposition.
Image 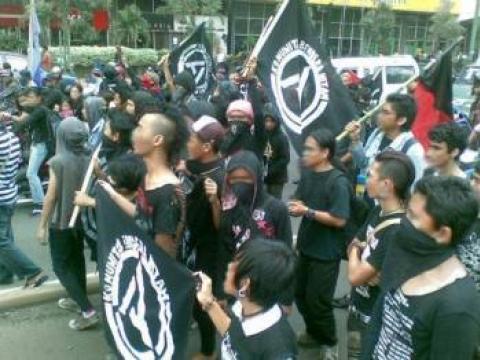 A 2010 interview with Indonesian anarchists about the anarchist movement there.