In 1924, Sebastien Faure invited Voline to Paris, where he assisted him in the publication of the Encyclopedie anarchiste. Both Faure and Voline were advocates of "anarchist synthesis," which sought to synthesize all that was best in the various strands of anarchist thought and to unify the anarchist movement, while trying to avoid what Voline regarded as the sectarian party spirit of the Platformists. The following excerpts are from Voline's entry under "Anarchist Synthesis" in the Encyclopedie Anarchiste.

"ANARCHIST SYNTHESIS " IS THE NAME GIVEN to a trend presently emerging from within the libertarian movement and aiming to reconcile and there after to "synthe­size" the various schools of thought which divide that movement into several more or less mutually hostile factions. Essentially, the aim is to some extent to achieve unity on theory, as well as to unite the anarchist movement into one harmonious, ordered, rounded whole. I say to some extent because of course the anarchist outlook could not and should not ever become rigid, immutable or stagnant. It must remain supple, lively, rich in terms of ideas and its various strands. But suppleness should not mean confusion. And, then again, there is a happy medium between immobility and flux. It is precisely that happy medium that the "Anarchist Synthesis" aims to identify, pin down and arrive at...

The three key ideas which ... should be embraced by all serious anarchists in order to unite the movement, are as follows:

1. Definitive acceptance of the syndicalist principle, which points the way to the real methodology of social revolution.

2. Definitive acceptance of the (libertarian) communist principle, which lays the organizational basis for the new society in the making.

Is the existence of several inimical anarchist currents, squabbling with one another, a positive thing or a negative one? Does the disintegration of the libertarian idea and movement into several mutually hostile tendencies further or frustrate the success of the anarchist belief? If it be thought to further it, there is no point in further discussion.­ If, on the other hand, it is regarded as damaging, then we must draw all the req­uisite conclusions from that acknowledgment.

To that first question, our answer is this:

At the outset, the anarchist idea was still under-developed and confused and it was only natural and useful that every aspect of it should be analyzed, taken apart, scrutinized thoroughly, its components examined and measured alongside one another,­ etc. Which is what was done. Anarchism was broken down into several elements­ (or currents). Thus the overly general and vague whole was dissected and this helped us delve deeper and make a more thoroughgoing study of that whole as well as of its component parts. So at the time this dismemberment of the anarchist idea was a positive thing. Various persons probed the various strands of anarchism and the details and the whole gained in depth and precision as a result. But then, once this initial task had been accomplished, after the components of anarchist thinking (communism, individualism, syndicalism) had been turned over and over from every angle, minds ought to have turned to rebuilding, with these same well-honed compo­nents, the organic whole from which they had sprung. Following a thoroughgoing analysis, we had to return (shrewdly) to the restorative of synthesis.

Bizarrely, minds were no longer focused on this need. Persons interested in this or that given component of anarchism wound up substituting it for the finished article. Naturally, it was not long before they found themselves at loggerheads and ultimately­ in conflict with those who accorded similar treatment to different bits of the whole truth. So, instead of grappling with the idea of amalgamating the scattered shards (which, taken separately, were no longer of much use) into one organic whole, anarchists wrestled over many a long year with the pointless task of hatefully pitting their "currents" one against another. Everyone looked upon "his" current, "his" morsel­ as the sole truth and steadfastly opposed supporters of the others. And so began that marching on the spot within libertarian ranks, characterized by blinkered vision and mutual resentment, which has lingered even into our own day and which should be deemed harmful to the normal development of the anarchist outlook.

Our conclusion is plain. Dismemberment of the anarchist idea into several strands has served its purpose. And outlived its usefulness. And has no further justification. It is now dragging the movement in to a blind alley, doing it tremendous damage and has nothing -can not have anything - positive left to offer. The first phase - when anarchism was searching for its bearings, being defined and inevitably foundering in the process - is over. It belongs to the past. And it is high time that we took things a step further.

If the dissipation of anarchism today is a negative thing, a harmful thing, we should be looking for ways of bringing it to an end. We must rally the whole and put the scattered components back together and rediscover and consciously rebuild the synthesis on which we had turned our backs.

Whereupon a further question arises: Is such a synthesis feasible at present? Might it not be utopian? Could we furnish it with a certain theoretical grounding?

To which we answer: Yes. A synthesis of anarchism (or, if you prefer, a "synthetic" anarchism) is perfectly feasible. And not at all utopian. There are some quite powerful theoretical grounds working on its behalf. Let us briefly review a few of these, the most important ones, in logical succession:

1. If anarchism aspires to life, if it looks to success in the future, if it wishes to become an organic and permanent feature of life, one of its fertilizing, creative driving forces, then it must try to cling as close to life, its essence and its ulti­mate truth as possible. Its ideological underpinnings must match the elementary­ features of existence as closely as they can. In fact, it is plain that if anarchism's basic ideas were at odds with the real elements of life and evolution,­ anarchism could scarcely be lively. Now, what is life? Can we somehow define­ and encapsulate its essence and grasp and pin down its characteristic features? Yes, we can. True, it is certainly not a matter of a scientific formula for life - no such formula exists - but rather of a pretty clear-cut , fair definition of its visible, palpable, conceivable essence. According to this line of reasoning, life is primarily a great synthesis: a vast, complicated whole, an organic, original whole made up of countless motley variations.

3. Life is a synthesis. Life (the universe, nature) is equilibrium (a sort of oneness) in diversity and in motion (or, if one prefers, diversity and motion in equilibrium). As a result, if anarchism wishes to march in step with life, if it wants to be one of its organic elements, if it wishes to be reconciled with it and to arrive at a real re­sult, instead of finding itself at odds with it, only to be rejected in the end, it too must - without renouncing diversity or motion - also and always achieve equilibrium, synthesis and unity.

4. Note, finally, that the true basis of diversity and movement in life (with syn­thesis as the jumping-off point) is creation, to wit, the constant production of the new, new combinations, new movements, a new equilibrium. Life is a cre­ative diversity. Life is equilibrium set in uninterrupted creation. As a result, no anarchist ­ could argue that "his" current is the sole and constant truth and that all the other strands within anarchism are nonsense. On the contrary: it is nonsense for an anarchist to let himself be led up a blind alley by one single little truth, "his own" and for him thereby to forget life's real great truth: the perpetual ­ calling forth of new forms, fresh combinations and a constantly renewed synthesis.

Life's synthesis is not stationary; it creates and is constantly modifying its elements and their mutual relations.

Anarchism means to partake, wheresoever it may, in life's creative activity. As a result, it should - in so far as its outlook allows - be broad-minded, tolerant and syn­thetic, while engaged in creative activity.

The anarchist should scrupulously and perspicaciously monitor all of the serious elements of libertarian thought and movement. Far from retreating into some singular element, he should be searching for some way to arrive at an equilibrium and synthesis of all given elements. Furthermore, he should analyze and constantly monitor his synthesis, comparing it against the elements of life itself, so that it may always be in perfect harmony with the latter. Indeed, life does not stand still; it changes. And as a result the role and mutual relations between the several elements of the anarchist synthesis will not always be the same: in different instances, it is going­ to be sometimes this or sometimes that element that is in need of underpinning, support and implementation...

We must discover and frame within the various strands of anarchism on the one hand, everything that ought to be regarded as phony, at odds with life's reality and in need of rejection: and, on the other, everything that ought to be registered as just, wholesome, acceptable. Next, all of these just and valid elements should be combined and a synthetic whole crested from them. (It is primarily in this initial ground ­ work that a rapprochement between anarchists of differing persuasions and their tolerance towards one another might achieve the great status of a crucial first step.) And, finally, this assemblage would have to earn the acceptance of all of anarchism's serious, active militants as furnishing the basis for the formation of a united libertarian body, the members of which would thus be agreed upon a range of fundamentals acceptable to them all.

First appeared in Encyclopedie anarchiste (Paris: Librairie internationale),1926-1934.
The translation is by Paul Sharkey and appared in Anarchism: A Documentary History of Libertarian Ideas Vol. 1: From Anarchy to Anarchism (300 CE to 1939) edited by Robert Graham

If anarchism aspires to life, if it looks to success in the future, if it wishes to become an organic and permanent feature of life, one of its fertilizing, creative driving forces, then it must try to cling as close to life, its essence and its ulti­mate truth as possible. 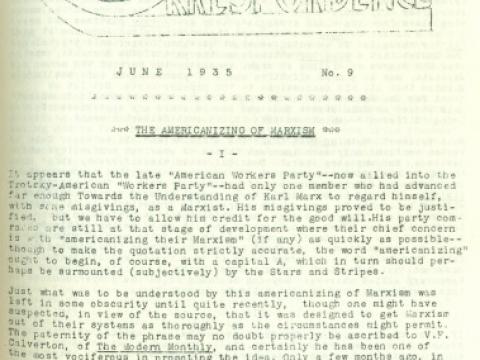 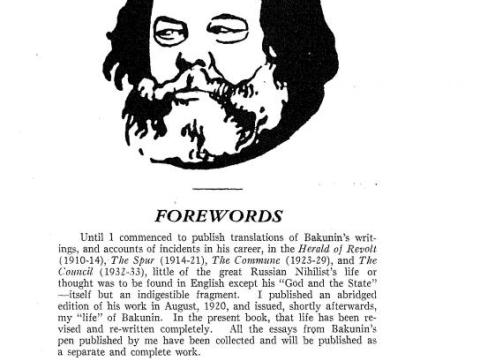