BM Blob's appendices to Once Upon A Time There Was A Place Called Nothing Hill.

It's not only Notting Hill of course. Elsewhere, an everyday tabloid assault plays on psycho-horror - its grim reality always spiced with suggestive innuendo.

Take one incident. Two little girls were horrendously murdered in Brighton on October l0th 1986. Afterwards, the police wanted to interview a fat man who could perhaps give some lead. But that's not the point here. For sometime - and highlighting soccer hooliganism – the cops have been looking for "the fat man" who was ostensibly "the leader" of 30 youths who went on a particularly horrible knife-slashing spree after a Chelsea/Man United game in London on the 29th of December, 1984. Since that day, off and on, the tabloid press has gone on about "the fat man". Finally a guy who was purportedly "the fat man" was arrested and came up for Crown Court trial just days before the Brighton murder. The tabloids, plus radio and TV news - deploying a form of subliminal suggestion - tried to montage these incidents together, even though there was no connection.

A general hypothesis: The UK state, via media suggestion is trying to pathologize (more, much more than reality suggests) all kinds of spontaneous flare-ups. It's something like a warning to each individual; a warning which isn't clearly spelt out (it would lose its effect if it were). It's something like: if you let yourself go you'll only breakthrough into a nether world of dark pathology; of ghastly sexual horrors and sadomasochistic mutilation. Moreover, with an on-going breakdown of traditional patterns sometimes resulting in sad monstrosities, the UK state finds fertile ground for its own psycho-promo assuming the warped and twisted face of a chastising, hideous hell-fire preacher using sexuality as scapegoat. Certainly the strategy works reasonably well in keeping a sizable sector of the oppressed fearful of what lurks inside and outside themselves.

When Protestantism reaches its end it explodes because it is based on the organization of everyday life. These infringements of the repressive order are then condemned as madness and perversion - a point Henri Lefebvre noted in Everyday Life in The Modern World in the 1950s.

Violent response in London runs a gauntlet between what is inspiring and what is sickening. It's more of a complicated thorny problem than one dares to admit. This is true elsewhere but in London violence acquires a special edge closely connected with London's rapidly changing character as almost a pure catchment area for investments related to the City's bankers. In the North it's always been somewhat easier to simply identify exploitation as related to the industrial magnate or the machinations of a distant Whitehall, despite the abstractions inherent in the process of industrial capital accumulation, in comparison to an earlier feudalism when the Lord of the Manor's rip-off was plain for all to see. Finance capital, though one of capital's "antediluvian forms" (Marx) has an almost objectless, unfathomable, mysterious feel to it. In London it's as though money is what makes the world go round and not the exploitation of labour power - something which is nearly impossible to grasp situated within a wealth seemingly flowing in all directions but your own. It's as though everybody is out to con you, slip you a Mickey Finn, and take you for a mug. It individualizes in a bad way as a disturbed economic unit implanted as an alien force in the psyche. Threatened by a commodity bombardment seemingly closing in from all sides, it's hardly surprising that the drifting atomised being (and often cut loose from the family) lashes out in frenzy at these nearly invisible menacing forces. So that old woman walking down the street is the one causing you to feel so fucked-up isn't she? Finance capital encouraging, even implanting a random psychosis, should be looked at more closely.

This frenzy explodes all over London in a fearful way, as it also gets worse month by month. Fortunately there is still plenty of an historical class identity, experience and feeling of simple togetherness in London to mitigate its worst side effects. But it is an identity, which is on the run and almost chaotic in itself, tending to increasingly gell welcomely with hooligan responses reaching out into insurgency. The media through its distorting lens tries to grotesquely distort this process of tentative empathy particularly when some psycho-horrific act is perpetrated. It's not inconceivable (though admittedly for the moment far-fetched) and taking into account a declining but general, lascivious Puritanism, used by the media -artificially boosting its legacy -plus, something of a general obsession with the darker Wuthering Heights side of sexuality (in a country where the collected works of the Maquis de Sade are still banned) that riots in London could be increasingly marginalized from the popular support they now enjoy, as the provocations of sex-mad muggers, child rapists, senior citizen murderers and demented sex-crazed, drug fiends. The "increasing aggression of the heart catastrophically sickened by everyday life" (Artaud) must move more lucidly into a clearer social insurgency otherwise the UK state will take up the theme, maim it, cripple it, promote it and turn it (via something like a 24 hour media barrage) into the cost effective counter-revolutionary strategy it has for its own long-term survival plan -a survival plan which apart from some inadequate but fairly predictable, ad-hoc measures - is still in its infancy. 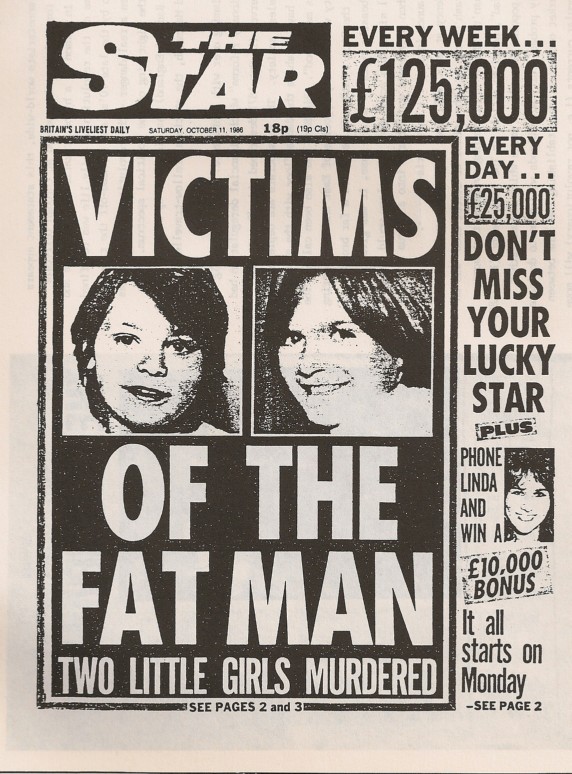 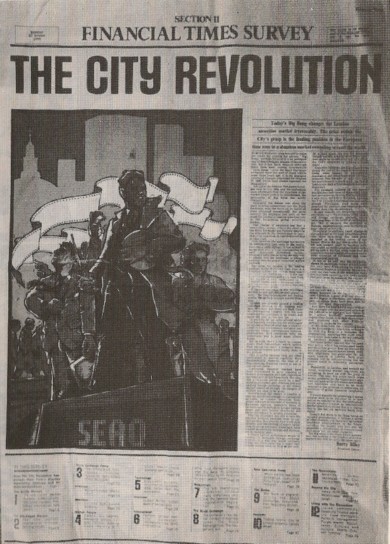 The above poster-type illustration appeared on the front of The Financial Times (27.10. 1986) centrefold celebrating Big Bang. The allusion to Bolshevikh modes of propaganda was unmistakeable. It's more than a conceit (e.g. Hungary has a Stock Exchange) but an oblique recognition of the debt owed to a resurgent Bolshevism which played a large part in capsizing all that was best in late 1960s/early 1970s subversion.

Given the obsessional anti-Bolshevism of monetarists world-wide this statement appears absurd. However the presence of subconscious forces has to be guessed at through telltale signs. What Monetarists and Bolshevikhs have in common is a hypostatisation of the state and political party. And all that was new in terms of the revolution of daily life was redefined within these givens. The con having worn thin by the late 1970s.and to head-off the risk of a rediscovery of revolutionary themes - by then a real danger - the revolutionary essence was once more perverted by being appropriated by the right wing of the political spectrum. Bank underground station (taking its name from the Bank of England) was also done-up with Suprematist designs recalling El Lissitsky and Malevich the at times fellow travellers of Bolshevism.

A week before The Crash the City was brimming over with confidence. There was a Big Bang Ball celebrating the "exchange's revolutionary reforms" which financial deregulation had brought in. A financial columnist in The Observer (11 Oct. 1987) described this "brave new world") "The filthy rich are now a classless society. The aristocrats are depleted but still there. The difference is that now they have to share the dance floor with the grammar school boys and worse, the dreaded barrow-boys made good". Big Bang had also been called "The Cockneys Revenge" but this assault on the City was the very opposite of East End mobs pouring down Shoreditch High St to really put paid to the City. Rather it reflected a far broader recruitment basis than hitherto drawing in 'beastly types'. In any case, it was given a prominence out of all proportion to its actual size. This scrum-down iconoclasm would also upset traditional Covent Garden Opera goers when City louts would burst into a chorus of "here we go" when a striker on stage was about to launch into a well known aria.

But there was also a countervailing tendency at work. Well-bred City gents would also affect working class mannerisms. Though a crash course at "the school of street cred" was an advertisers invention a night at the dogs wasn't. "There is disturbing evidence that some dog meetings are becoming the latest yuppie fad," noted an article in The Independent (11.1. 1988). Now The City cannot hope to preserve its popular 'classless' image, which lasted rather less than a year after Big Bang. It is highly probable City blue bloods will come to dominate financial services at the upper end of the market once more re-establishing the link between top public schools and a job in the City. Popular currents (i.e. not revolutionary) will move in a different direction - perhaps eventually settling for a new-fangled edition of one-nation patriarchs attentive to the voice of discontent as expressed and contained within the trade union. 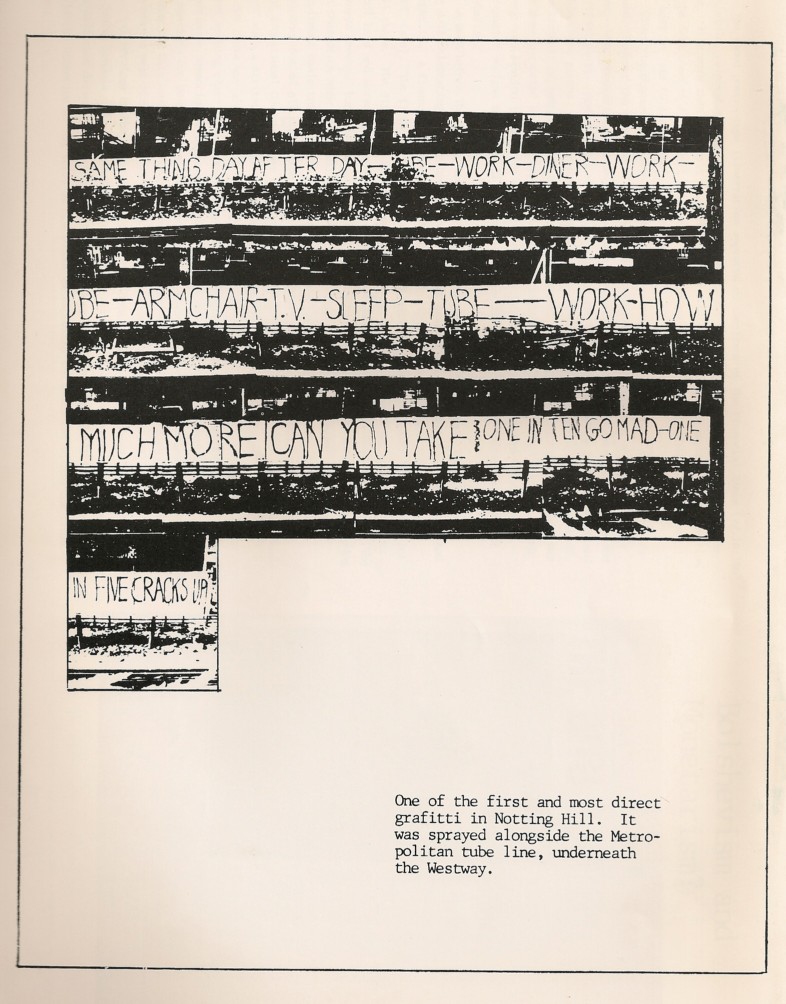 The 1987 Carnival and the Limits of an Urban Pacification

BM Blob on the riot at the 1987 Notting Hill Carnival.

BM Blob's postscript to Once Upon A Time There Was A Place Called Nothing Hill.