An account of the Irish Traveller community in Dublin building its own school in the 1960s - and how this brought them into conflict with local authorities.

On the morning of January 4th 1965, a makeshift school built by Traveller families for their children re-opened at a site at Cherry Orchard, Ballyfermot. Entitled Saint Christopher’s, after the patron saint of Travellers, the school went up without planning permission, and independently of the Irish government’s Department of Education.

Twelve months earlier, the first incarnation of the school had been demolished by Dublin Corporation on account of a breach of planning regulations. Saint Christopher’s presence marked another chapter in an emerging civil rights movement for an indigenous minority in Ireland. At the centre of this activity was Grattan Puxon, a twenty-five year old journalist, who trained for three years as a journalist on the Essex Standard and Colchester Gazette before he came to live in Dublin. He freelanced around the city’s press offices, highlighting injustice towards itinerants.

Puxon inhabited his own caravan around the western edges of Dublin City, working with the Itinerants’ Action Committee to strenuously agitate for the establishment of permanent camping sites and educational facilities. Such facilities were much-needed in Dublin. The mass production of tinware and plastics and the mechanization of farming caused an economic decline in tin-smithing and horse dealing in rural areas from the 1940s onwards. Many Travellers moved to urban areas, and began to work in recycling waste and dealing scrap.

The first version of Saint Christopher’s was located on Dublin’s western Ring Road near the Grand Canal. It was built in December 1963 in a field zoned for industrial use, straddled in all directions by electricity pylons on a site where itinerant families regularly camped. It was the first school to be built in Ireland by itinerants for their children, despite numerous unimplemented recommendations from 1960 onwards by the government’s Commission on Itinerancy. Noted Irish Republican and Marxist activist Peadar O’Donnell formally opened the school. He said “The greatest reason for hating poverty is because of what it does to children. It robs them of their rights, and this is particularly true where education is concerned.”

The ramshackle wooden structure, measuring fifteen by ten feet, was constructed from materials salvaged from the Red Cow dump and Bill Birmingham’s scrap yard in Bluebell Lane. It was furnished with battered desks, a wood-burning stove made from an oil drum, and an earthen floor. Half the roof was blown off by a gale the night before the school’s opening, and emergency repairs had to be made. 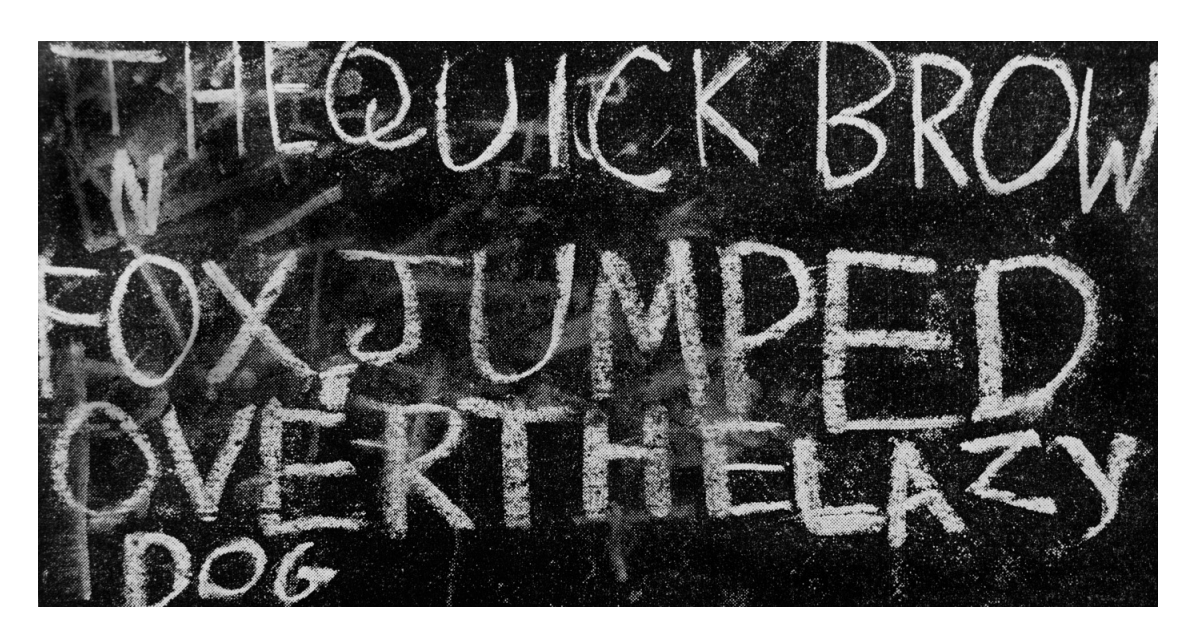 Puxon said “We take the view that, by doing this, we are doing the job the Corporation should have done years ago. This building is in some ways a pathetic gesture towards the solving of the problem, but it is an important gesture. At the moment, four national schoolteachers will devote their spare time to teaching fifty children who are expected to enrol. They cannot all fit into the school at the same time.” Many children began to learn to write for the first time at Saint Christopher’s, such as the writing of THE QUICK BROWN FOX JUMPED OVER THE LAZY DOG by eight-year old Bill Donoghue. Voluntary teachers included John Dillon, an Oxford graduate; his sisters, Katherine and Elizabeth Dillon, and Sean Sutton, a history student at U.C.D. Classes were broken into units of ten to fifteen children, and timetabled accordingly for the use of the small facility. The Montessori method of teaching was adopted, prioritising an emphasis on self-directed activity by the pupils. One teacher said “they are wonderfully receptive children, mannerly, good-natured and appreciative.”

Momentum began to gather. A truck arrived, and dumped a half-ton of scrap iron near the school with the stipulation that it be sold to raise funds. Palmerstown residents delivered four parcels of clothing. The school building was re-roofed, with horse dealer George Farrell giving a new tarpaulin cover for three pounds. It had originally cost him six pounds. A businessman presented the school with a thousand coloured counters to help young children learn simple arithmetic. Army private James Smullen of Cabra gave a complete set of desks. He intended to reassemble the desks into a garden fence, until he heard about the needs of the school. An appeal in The Irish Times called out for pens, pencils, chalk, paper, second-hand schoolbooks, an easel for the blackboard, and a bell to call pupils to class. A letter was sent to the principal officer of the Department of Social Welfare from the board of governors of the school requesting a daily delivery of milk for the pupils attending.1 Legion of Mary nuns decided to visit, and imparted religious instruction, as all attending were Catholic. 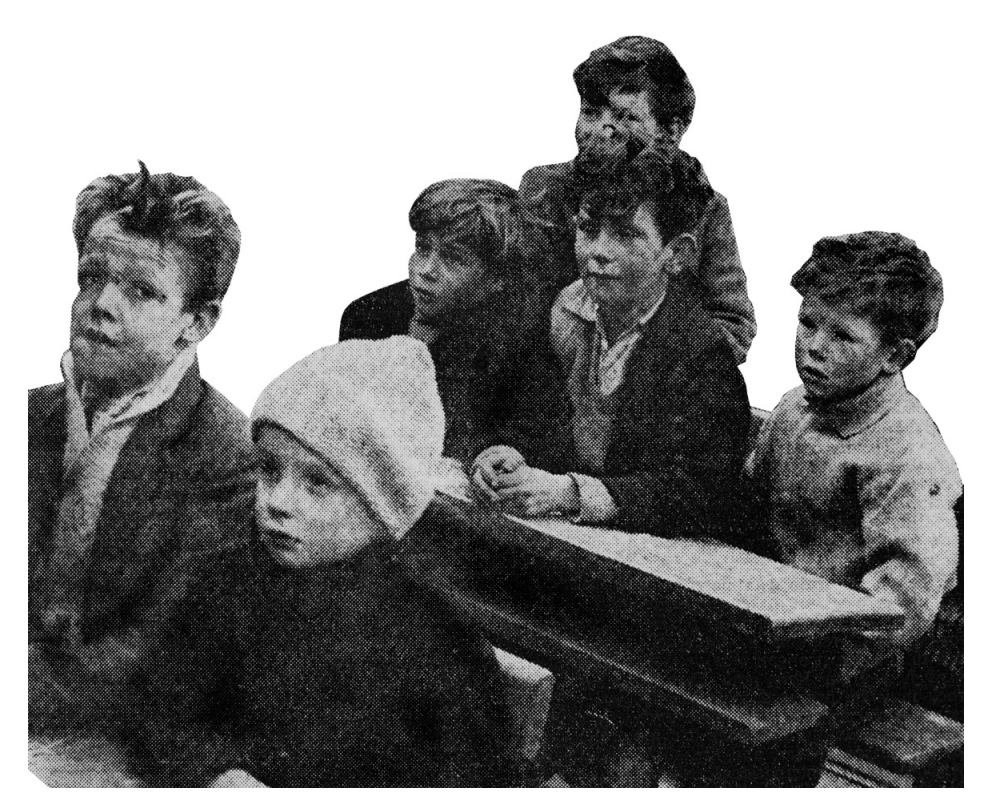 Severe disapproval of the school was expressed by the Irish National Teachers’ Organisation, describing it as “an atrocity.” “These itinerant children,” they observed, “have no tradition of school going. It is foreign to them. We do not believe that they can be introduced to it in a haphazard way.” Dublin Corporation also expressed their concern. “This is a Corporation site for housing,” an official pointed out, “and as a housing body rather than an educational body we, ourselves, have to honour our commitments. We look on attempts to solve the tinker problem by taking action which flouts the law as tantamount to sabotage.”

Before daylight on January 8th 1964, three lorries, two squad cars and two tractors arrived at the site. Twenty corporation workers with six police, one sergeant and one housing inspector were prepared to carry out an eviction of thirty families, in twenty caravans and tents. The Itinerants’ Action Committee had the tidings of this move and at the gate of the field stood men with placards in picket formation. The workers did not pass. A temporary truce was agreed on. The picket went back to the camp and lit a campfire of broken timber. Corporation workers erected a shelter on the roadway and also lit a campfire. The gardai paced up and down.

By midmorning, with a singing and counting class going on inside Saint Christopher’s, workmen ran a chain around the building, and began pulling the structure down. The tarpaulin cover was saved from the roof of the school, and all inside were forced to leave. By noon, all itinerants had left the site, finding an uneasy resting place on ground some distance up the Ring Road from the abandoned camp. Police arrived and said that they were to be evicted once more in the morning. Later, upon returning to the Ballyfermot site to salvage school desks from Saint Christopher’s, Puxon found the school and its’ contents demolished, and on fire.

The eviction policy continued throughout January. The group were driven on January 15th from Walkinstown Avenue; two days later from Lansdowne Valley, Inchicore; the next day from Bluebell Avenue, and from Le Fanu Road on January 23rd. The reason given by the Corporation was the health hazard posed, not to the itinerants themselves, but to those in the proximity of their camps.2

By February, the group squatted on twenty-six acres at Cherry Orchard. Leading members of the camp such as Mick O’Brien, Joe O’Donoghue and Frank Gavin again began their work of gathering scrap and recycling waste material. School classes were held in small caravans. Puxon launched a plan, involving the establishment of a settlement on a permanent site, a full welfare programme, a workshop for the production of itinerant manufactured souvenirs, and a “crash” education programme involving, if possible, the use of local school buildings after school hours.3

The possibility of eviction continued to loom throughout the year, with Ballyfermot Textiles, the owners of the land, being summoned for allowing an alleged nuisance to continue on the site. Trenches were dug around the camp, and by the end of 1964 its population increased to over three hundred inhabitants, with twenty eight huts built in-situ. Problems with a steady water supply for the settlement continued throughout the winter months.

Saint Christopher’s School, version two, was constructed in January 1965, providing education for seventy children onsite. Wooden packaging cases, used by car importers Lincoln & Nolan, were fetched out of a landfill at Ringsend and used to form walls. Polythene sheeting was used for windows and a skylight. Among those teaching at the school were Frank Leslie, a student teacher attending U.C.D., Anthony Browne and Venice Manley. Bewley’s café and the Quaker community supplied lunch each day. Adult classes were initiated and ran in the evenings. By April the school was extended in size, using materials sourced from Cummins’ galvanizing works at Inchicore. 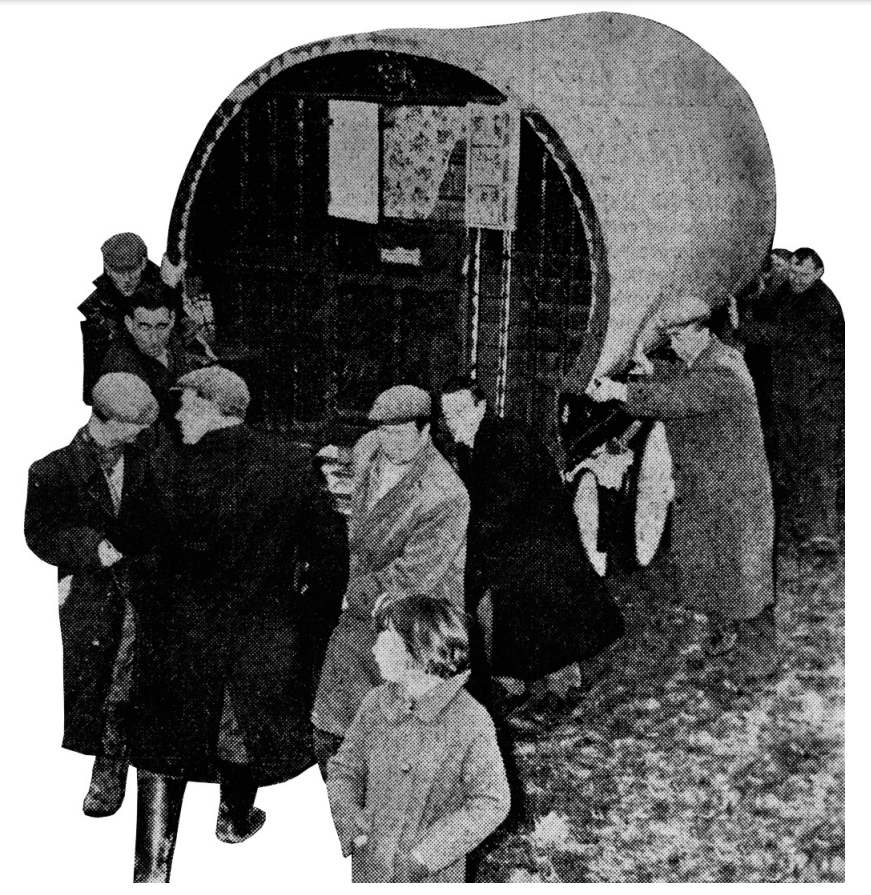 With growing publicity for the Traveller situation, the Catholic Church began a closer involvement with the cause. An appeal on television by the Rev. Dr. McQuaid, Archbishop of Dublin raised money and the camp committee put in a request for a bigger school building. Confident of a positive response, an architect set about designing two low-cost alternatives.4 One was for a conventional rectangle plan and the other for a hexagon, with a canvas roof and open interior space. It would provide a community centre as well as a classroom.

However, the possibility of more illegal building on the Cherry Orchard site funded by the Church was not likely. Before such matters might have been resolved, the Itinerant Settlement Committee, a loosely knit group of clerics and wealthy philanthropists, began to organize buses to take the pupils at Saint Christopher’s out of Cherry Orchard. Legion of Mary nuns rounded up children at the campsite, and sent them out of their by-now familiar surroundings to a Jesuit institution at Milltown. By the end of 1965 Saint Christopher’s ceased functioning. Grattan Puxon and dozens of Traveller families left for England in 1966. 5

Extract from 'Views of Dublin' by Sean Lynch (2008): Printed matter from an exhibition presented at the Gallery of Photography in Dublin, based upon a series of inter-related events in city in 1965.
https://www.seanlynchinfo.com/publications.html 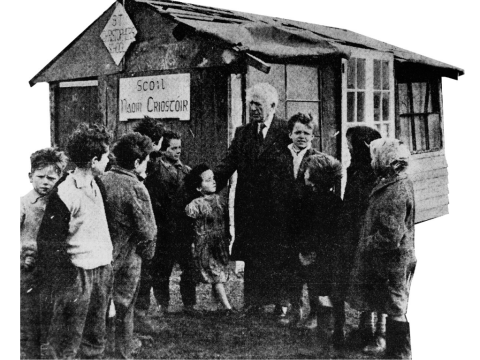 Syndicalist Workers Federation report from 1964 on the Irish Traveller community in Cherry Orchard, Dublin, taking matters into their own hands… 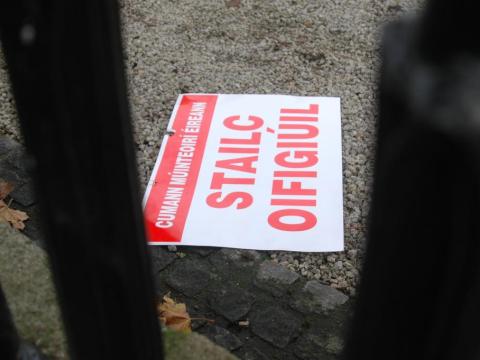 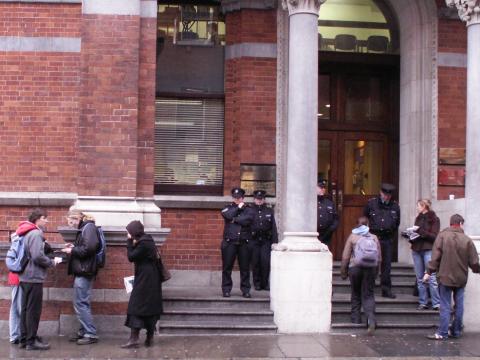 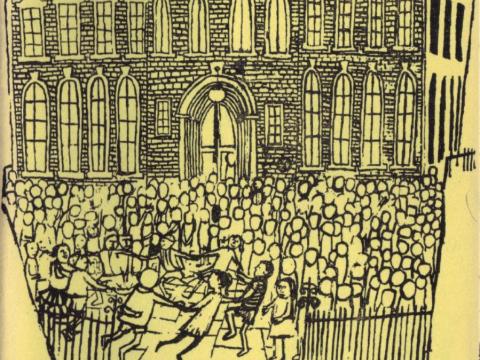 Issue of Anarchy magazine from November 1962