The Beat Goes On: A History of Cable Street Beat - Kate Wesprin

A history of Cable Street Beat, the musical wing of Anti-Fascist Action, from Fighting Talk magazine. This article was digitised as part of the collection at uncarved.org.

We are pleased to announce the arrival of our newest column 'The Beat Goes On' which is supplied by Cable Street Beat and looks at the wonderful world of music from an anti-fascist perspective. To get the ball rolling Kate Wesprin outlines the history of AFA's music wing, Cable Street Beat.

Cable Street Beat (CSB), the anti-fascist music organisation was originally formed in 1988. There were two main reasons why it was felt important to create CSB. Firstly it was seen as a good way to get a militant anti-fascist message across to a wider audience and secondly, the threat posed by the fascists in respect of the way that they were organising in music, while at the same time attacking gigs, was something that could not go unchecked.

n the 1970s Rock Against Racism was formed due to a number of comments made by prominent musicians. David Bowie had sparked things off by saying that what the country needed was a fascist regime. Later Eric Clapton added to this view by claiming that there were too many immigrants — he thought Enoch Powell had been right.

Ever since the days of punk there had been trouble with fascists at gigs. Trouble again emerged with the arrival of the NF's White Noise Club and later Blood and Honour in the mid-80s. Anti¬fascists had to address the situation. As one early activist who was involved in CSB told me:

"the fascists had built up a movement that was getting a lot of young people involved, mainly skinheads, and what was recognised was that an organisation was needed to get people involved in militant anti-fascism, kind of a left-wing version of Blood and Honour."

What really kicked CSB into action were three incidents during the mid-1980s. The fascists were looking to impose themselves on the wider music scene. They sent a clear message to anti-fascists that certain types of music would not be free to play without the threat of violence. In particular they attacked three gigs, the Pogues, Desmond Dekker and the Angelic Upstarts. Three strands of fascism were apparent in these actions, anti-Irish, anti-Black and anti-socialist.

In response to this CSB and AFA began to organise themselves. They started oil gradually, organising three or four small gigs the first of which was The Blaggers and The Neurotics in The White Horse, Brixton. Coupled with this was the Cable Street Beat Review, an independent voice for militant anti-fascists. It was in a magazine format and although there were only five issues it later developed into Fighting Talk.

Cable Street Beat went from strength to strength; the first big event was a resounding success. The Men They Couldn't Hang played a sell-out gig at Camden's Electric Ballroom, proving that there was support for politics in music especially considering that it was on a Tuesday evening. Before the gig there was a press conference which members of all the bands attended. This was significant in itself, it showed that the bands were prepared to speak out in favour of militant anti-fascism, which in turn led to an increase in coverage in both the music press and on the radio.

The gig was held on the anniversary of the battle of Cable Street. During the gig a veteran of that battle spoke — he got the biggest applause of the whole evening, proving that politics and music could work together encouraging people to get involved and voice their opinions.

Next came the Dance and Defend Tour which took anti-fascist politics all over the country, including London, Brighton, Hatfield, Harlow, and Manchester. The money raised helped pay off the fines of activists arrested during clashes at the Remembrance Sunday NF march.

A great victory came when CSB put on The Angelic Upstarts at the George Robey, Finsbury Park, on 21st January 1989. Previously in May 1988 the band had played in the Astoria. Fascists had caused trouble at the gig and prevented the band from finishing their set. After this they had threatened that the band would never be allowed to play in London again. Militant anti-fascists were adamant that this would not be the case. Once the gig was announced the fascists again repeated the threat claiming that they would be down to carry their threat through. On the night of the gig:

"four dubious individuals turned up, I think really that they wanted to go home, however they were told that they would stay and watch the gig and if their right arms got above shoulder height that they would be pulled off and raffled, once they'd seen the gig they could go home to their mates and let them know what they were up against."

In a review of the gig afterwards it was stated that "They left by all accounts, in subdued mood."

At the same time the fascists were trying to go mainstream, renting premises in Carnaby Street to sell their merchandise. On the day of the Upstarts gig anti¬fascists had picketed the shop:

"the clean up against the sale of Nazi memorabilia in shops around Carnaby Street took off with a vengeance last weekend. More than 200 people joined one anti-fascist picket... the day ended with a march through Carnaby Street itself, which prompted two crop-headed members of the master race to strut from a local pub, only to flee when their courage deserted them. One sought sanctuary in the women's changing room of a nearby boutique."

The fascists tried to step up their campaign when on May 27th 1989 Blood and Honour planned to hold a major international gig in London. Originally they had booked Camden Town Hall under a false name but this was uncovered and stopped by AFA. In response B&H leader Ian Stuart declared that the gig would go ahead no matter what. Even to the point that he promised to refund the ticket money should it not. With a capacity of 1,200 and tickets costing £10 this was quite a considerable sum of money. However AFA got wind of the redirection point and were able to take control of it over an hour before the fascists arrived. Lively skirmishes ensued between anti-fascists and the largely foreign groups of skinheads that were foolish enough to turn up at the redirection point:

"a group of AFA jumped on the tube, getting off at Bond Street, they flew out of the station, straight into the fascists who then got battered. Three young black women who were standing across, the road started clapping and cheering, these fascists had been walking up and a down Oxford Street all day, knocking into people and generally being obnoxious. That same night persons unknown went through the door of the fascist shop in Carnaby Street with a couple of sledgehammers and wrecked a lot of stock. The fascists couldn’t keep it going and the shop owners flung them out.”

It was at this point that the fascists realised that it would not be possible for them to operate openly. They waited three years before they tried again, when with support from the British National Party, they publicly announced another gig redirection point - Waterloo! This has been discussed in many issues of Fighting Talk, and therefore needs little comment, except to say that they have remained very secretive ever since!

CSB organised three Unity Carnivals, the first in 1991. These events highlighted the ability of music and politics to work together, complimenting each other. It was felt at this point that anti-fascists should set the agenda, challenging fascists in their "own" areas:

"the Unity Carnival was part of an ongoing strategy to challenge the BNP in East London with their 'Rights for Whites' campaign. The BNP were having public meetings and marches, clashes ensued which were effective, however it was felt important to take anti-fascist politics to a wider audience. The Unity Carnival was successful in achieving this goal. About 10,000 people attended"

The second Unity Carnival, also on Hackney Downs, provided the ideal opportunity to involve people in direct action. It was at this event that much of support that was to appear at Waterloo two weeks later was found.

The next carnival followed in Newcastle in 1993. The Shamen headlined. Just before the band were to go on someone noticed that the AFA banner had been taken down:

"So the Blaggers and Fundamental preceded to mount the stage and rehang it. After the gig words were exchanged and a few blows. AFA and CSB were determined that the matter should not be left without comment. Letters were written to and published by the music press with the result that a certain amount of money was donated back to the organisations involved in organising the event. The Shamen did not provide their services for free and were obliged to play in front of the banner and there seems little point expecting to play a political event, and then trying to erase the message."

It is important to briefly mention the work of Freedom of Movement. A number of DJs were eager to organize raves to promote the anti-fascist political message. Although it was successful for about a year, producing the “This Is Fascism” double CD and a number of very well attended raves around the country, when FOM began to lose contact with AFA it began to drift.

Having said this it is now time to look to the future and the relaunch of Cable Street Beat. I asked some of those involved previously about the things that were learnt the first time round and their opinions on what Cable Street Beat should be doing in the future:

"All the lessons that have been learnt over the years mean that we can now set something up that will last. You need to keep anti-fascism on the agenda, to keep banging away at the music press, to make people realise that it is not some passing trend, that the problem hasn't gone away. Bands that support AFA must be asked to make a certain level of commitment and there are many ways in which they can help. For example, putting the AFA address on their album sleeves, taking merchandise on their stalls, right through to playing benefits. The fascist bands have always given much greater support to their organisations than we have ever got, after all if you think about it, it doesn't take much to help."

In the South of France, where Le Pen's FN control 4 towns, one of the first targets they have attacked is youth culture. We have been warned!

Four dubious individuals turned up... they were told that they could stay and watch the gig and if their right arms got above shoulder height that they would be pulled off and raffled. 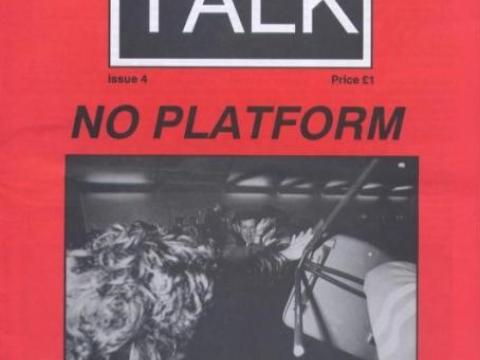 Anti-Fascist Strategy: One Step Beyond

Anti-Fascist Action strategy article in the lead up to Labour being elected in 1997. From Fighting Talk issue 16. 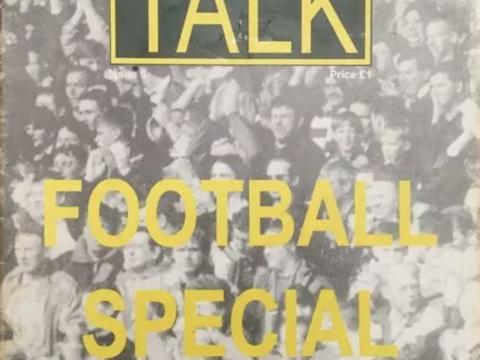