The 11-year prison sentence passed down to BNP bomber Terence Gavan, the ongoing Aryan Strike Force trial, the ructions in Stoke council group and the general election fallout, and the forthcoming EDL demo mean continued strife for the BNP and far right groups.

Terrence Gavan, a BNP member, was sentenced to 11 years for possession of explosives and firearms. But this is hardly new. The BNP has always attracted its fair share of gun fetishists, explosive fantasists and mini-McVeigh’s: Tony Lecomber was convicted on explosives charges in 1985; ‘London nail bomber’ David Copeland was jailed for murder in 1999; Stuart Kerr, a fan of BNP and Combat 18, was jailed for bombing an Asian shop in the same year; David Tovey was jailed 2 years later for stockpiling explosive material; Robert Cottage and David Jackson were done for explosives in 2006; in the same year John Laidlaw was jailed for a shooting spree in north London; and Allen Boyce and Terry Collins were both convicted on explosives charges. There will no doubt be others and this kind of behaviour does little to enamour the BNP to the average voter or convince its opponents that they are anything other than violent extremists with a PR officer.

Notorious Nazi and English Defence League activist Michael Heaton or ‘Wigan Mike’ is also on trial for using the web for incitement to murder. Heaton and co-defendant Trevor Hannington were accused of “possessing information likely to be useful to a person committing or preparing an act of terrorism and disseminating a terrorist publication.” Oddly, when initially charged, Hannington was remanded whilst Heaton was bailed. This caused some suspicion on the Nazi VNN forum but was apparently ‘explained’ to the moderator although there has been little posted since to substantiate the claim. Heaton and Hannington are linked to the Aryan Strike Force group as is Ian Davison currently on trial for possession of explosives and poison (ricin).

Stoke BNP
Chemicals and explosive asides, the BNP is facing trouble in its Stoke stronghold whilst the forthcoming EDL demo is going to attract much media attention. The BNP have 9 councillors (out of 60) in Stoke but their group has started to fall apart. A few weeks ago BNP group leader Alby Walker stood down after 3 years amidst “rumours of growing friction within the group over its future leadership and political direction.” Walker was supposed to be campaign manager for Simon Darby, deputy BNP leader, in the forthcoming general election but is now intending to stand as an independent candidate against him. Walker’s decision will no doubt split the BNP vote as he will take his loyal supporters with him. This is not good news for Darby who sees the seat as winnable.

On January 15th, Darby and Griffin were in Stoke to launch the BNP election strategy. They were confronted by demonstrators and surrounded by cops. Darby initially said that he and Walker were not standing in the same ward. Walker said he was disillusioned with the BNP and that Griffin had asked him not to stand against Darby. He refused. It would be a blow for Griffin’s strategy of seats for the leadership not the locals if Walker stands against Darby. There is a rumour on the NWN forum that Walker was ‘pushed’ out of running for MP by Darby and that the BNP leadership was hoping to capitalise on local BNP popularity. This has precedent with Nick Griffin elbowing Richard Barnbrook out of the Barking contest. Darby wrote on his blog: “Of course this should have been Alby Walker's seat but for personal reasons he is having to concentrate on other matters." Another NWN poster wrote: “By Darby doing this he will have pissed off a lot of the Stoke members and they will stay loyal to Alby.”

The EDL
The fragmentation of the Stoke council BNP group is not the only worry for residents. The English Defence League will be demonstrating in the town on January 25th. The EDL continue to deny any far right extremist links but the aforementioned Heaton is an EDL forum admin and there is obvious Nazi presence at their gatherings: the many photos of known far right activists and others Sieg Heiling away does little to convince otherwise. Although the BNP has claimed that the EDL is a proscribed organisation, known members are regularly seen on their demos and are clearly involved in organising. Many local BNP supporters will be in attendance on the 25th as no doubt will Stoke City’s football firm the Naughty 40. The EDL will aggravate racial tensions, cause chaos and cost the locals a large sum in policing but could also increase support for the BNP.

The EDL have been liaising with the police and on the day will be escorted to, surprise surprise, Wetherspoons in Stoke. Some forum members disagree with the ‘legal strategy’ and know full well that the cops will marshal them to the pub and hold them there until it’s time to go home again: “a complete replication of notts. penned in a Wetherspoons and herded about, out of sight of anyone. This is exactly why we should have no cooperation with the pigs.” And also: “If the police f**k the EDL over on this one, then we will f**k over the police.” To which someone replied: “Well done, just the sort of talk the cops will be reading and just the sort of attitude and crap that will get us limited in what we can do.”

The EDL has asked supporters not to drink too much before the demo, worried about aggro and the lack of toilet facilities, no doubt following the embarrassing images of ‘patriots’ pissing all over Nottingham Castle last year. The EDL leadership urge people to be on their ‘best behaviour’ but the temptation to drink too much, racially abuse people and confront the cops is going to be too much to resist for many of their supporters. Whilst the ‘leaders’ may say 1 thing there are those who go on the demonstrations hoping for a ruck now it’s so difficult to do so at football matches. The EDL is also desperate to flag up its ‘multicultural’ membership and they have announced:
“We will have two speakers; one is a Sikh, and the other is one of our black members, both proud Britons, and both of whom have volunteered to help start the year off strong by telling the UAF exactly where they can stick their dishonest claim that we are racists.”

They also still believe that because the EDL dislike extremist Muslims, those who oppose the EDL must therefore support the extremists. Which is political naivety writ large. They are as clueless about who oppose them as they are about who supports them and continue to make noises about excluding Nazis whilst the likes of Heaton administer their forums. On the day of the Stoke demo, a threatening group of lads will be stuck at a town centre pub, surrounded by cops, and no doubt making their presence felt noisily which will do little to enamour them to the community. It will attract the local football firm, BNP supporters and casual racists looking for a laugh. The demo will attract a counter-demonstration, create a huge policing bill and plenty of media coverage which will be posted all over the EDL websites as another ‘success.’

Conclusion
So, yet another BNP supporter has been convicted on explosive charges; the Heaton/Hannington trial over incitement continues; Stoke BNP council group is fragmenting; Simon Darby faces opposition from Alby Walker in the Stoke election; and the EDL is about descend on Stoke to cause its usual noisy media hype. All in all, interesting times for the far right.

Excellent article which I've tweeted and added a link to on our Facebook group One Million United Against the BNP:

Have also posted a link on our new website:

all the malatesta stuff is copyright free so use it as you see fit.
cheers E 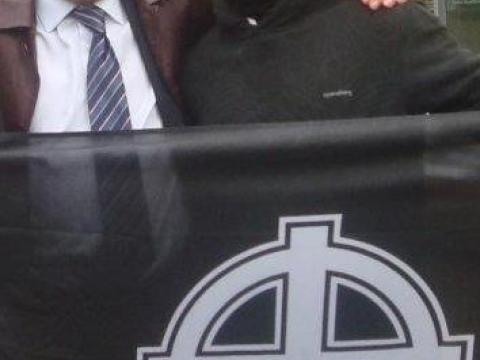 The far right make a hames of things. Again! A February 2012 update on the antics of the English Defence League and British National Party. 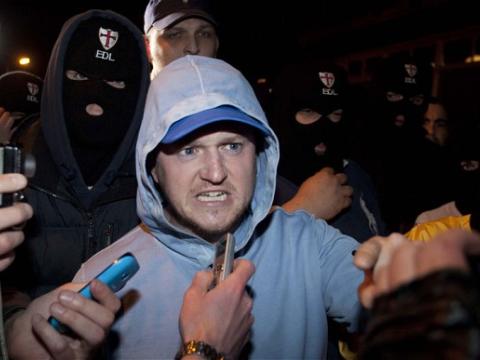