A biography of early British anarchist Fred Charles who was accused in the Walsall Anarchist frame-up.

Born Frederick Charles Slaughter, Fred Charles was a leading light within the very active Norwich branch of the Socialist League in the 1880s. The Socialist League was a revolutionary socialist organisation that had broken with Hyndman’s Social Democratic Federation, some because of their dislike of the autocratic Hyndman, some because of their dislike of Hyndman and his politics.Fred was converted to revolutionary ideas whilst serving as a special constable and policing a speech given by Charles Mowbray in Norwich.

The Commonweal
When the Socialist League brought out its Manifesto in 1885 the socialists in Norwich enthusiastically welcomed it and set up a branch. Fred was instrumental in this. His small income enabled him to run a café as a centre for the movement, the Gordon cafe at 5 Duke Street. In early 1885 he set up the Norwich Pioneer Class for the Discussion of Socialism. Eleven people were recruited from this to help him found a branch. William Morris visited the branch to give it a boost, as did the tailoring worker Charles Mowbray from London and Fred Henderson from Bradford.

The Leaguers carried their propaganda into the countryside. Travelling six miles along bad roads in all kinds of weather to the village of St Faith’s where an enthusiastic crowd was ready to hear about revolutionary ideas and set up a new branch. Fred and the other Leaguers drove hard for working class support and were deeply involved in agitation among the unemployed. By Easter 1886, the branch was drawing audiences of 1,000 to its open-air meetings in the Market Place and its membership rose rapidly. By 1887 Fred, who had dropped his last name, had developed explicitly Anarchist Communist views alongside Mowbray and David Nicoll.

The Battle of Ham Run
This was a time of high unemployment and on Friday 14th November 1887, 500 unemployed rioted after attending a meeting addressed by Mowbray and Henderson (then an Anarchist Communist who ended up as a Labour Mayor!). The insulting tone of the Mayor, the unconcealed contempt for their fellows on the part of the councillors and aldermen... angered the crowd and they broke away’. The mansions of the rich were attacked and their windows smashed. Shops were looted and the incident became known as the Battle of Ham Run after the evidence of a police constable who testified to a looted ham being ‘run over’ – handed back over – the heads of the crowd. For this Mowbray and Henderson were sentenced to nine months and four months respectively on the treadmill of Norwich Castle prison.

League membership rose to 200 in Norwich, a fifth of total membership. Fred, though, seems to have been forced by local repression to leave Norwich, turning up in East London in early 1888 where he carried out mass propaganda alongside the old anti-parliamentary communist Joe Lane.

They set up the East End Socialist Propaganda Committee with the support of local Socialist League Clubs and the foreign anarchist clubs: ‘commencing a systematic distribution from house to house... of leaflets, pamphlets… and other literature, as well as pasting up leaflets, bills, etc… they have besides commenced holding regular open-air meetings at about 20 places in the district’. They exceeded this by establishing 27 pitches, although they had over extended themselves and the agitation eventually ground to a halt.

The Sheffield Anarchist
Fred, ‘out of employment and in a desperate mood’ was forced to go to Sheffield to obtain work. Here, with Doctor John Creaghe (who was to spend much of his later life as an active member of the Argentinean anarchist movement), he set up the paper the Sheffield Anarchist in 1891 – eight issues being published over four months, attracting prosecutions from the first issue.

Reminiscing about these days, Creaghe was to later write: ‘I cannot forget the time that Charles, who was then out of work started with me the first number of the Sheffield Anarchist. He would do nothing for himself. If his chances of getting a £1,000 depended on his keeping an appointment, I am certain he would not be there and I am astonished how actively and steadily he worked for the cause he loved. I cannot say how often I regretted it when he had to leave me, for we spent some happy hours in that anything but sweet smelling den which served us as a club and office... How we laughed as we scribbled and enjoyed in anticipation the horror and rage of the enemy.’

Indeed, Fred was remarkable for his generosity – most of his disposable income being given to tramps and beggars. He had been known to take off his coat and pawn it so he could give money to a fellow worker without money. The East End anarchist Ted Leggatt, who organised among the cart drivers, wrote that he had seen him ‘take his best boots off his feet and the last half crown out of his pocket and give them to a man he had never seen before…’

Another anarchist, David Nicoll, editor of the League paper Commonweal remarked that ‘I, who knew him well, have often thought that Charles, Atheist and Anarchist as he was, had more of the spirit of Christ about him than those who talk so loudly of their Christianity’.

The Sheffield socialist, poet and advocate of homosexual freedom, Edward Carpenter, wrote that he was: ‘one of the most devoted workers. No surrender or sacrifice for the ‘Cause’ was too great for him; and as to his own earnings or possessions, he practically gave them all away to tramps or the unemployed.’

The Walsall Anarchist Trial
Fred’s failure to get a job in Sheffield forced him to move to Walsall where he obtained work in an iron foundry. Here he was caught up in provocation instigated by a French police agent. He and other local anarchists were arrested and charged with bomb manufacture in 1892.

At the trial, Fred said openly that it was all a police plot and that he thought the bombs were intended for use in tsarist Russia. When he found out that they were not, he washed his hands of the matter. This did not stop him getting a sentence of ten years of which he served seven and a half. One of the police inspectors involved admitted later in his memoirs that the whole affair had been a provocation and frame-up. It was here in 1896 that Carpenter brought the sad news of the death of artist and libertarian socialist, William Morris, to Fred, who burst into tears. Whilst in prison he received letters from Charlotte Skerrett, a teacher and anarchist In Oxford "who devoted her time and much of her fortune, which was not inconsiderable, to the cause" ( Nelly Shaw). She met him at the prison gates on his release from jail in 1899 and took him on a tour around Europe to relieve the hardship of his imprisonment. They then went back to Norwich. By 1913 they were in Oxford where they translated and published the book How We Shall Bring About the Revolution by the anarchosyndicalists Emile Pouget and Pataud during the great industrial unrest of this time. Fred was also involved in the setting up of a Building Workers cooperative with over a hundred members. They lived in the Summertown district.

After the Ruskin College strike of 1909, Fred served on the management committee of the new college as a member of the Oxford Cooperative Society, acting as a lecturer and tutor in industrial and political history until mid-1911. As the couple were interested in the land question, they became involved in market garden ventures.The first venture was at Marston outside Oxford. Two further such unsuccessful ventures followed, and running out of funds, they left Oxford for Kidlington eventually retiring to the anarchist colony in Whiteway, Gloucestershire in the 1920s.(There are photos of Fred, sporting a large, white walrus moustache, standing in front of one of the houses he had helped build at Whiteway.) Fred was the first to ffer voluntary labour at Whiteway, waiting on guests at tea and acting as their escort around the colony. The interiors of the schoolroom and hall were painted by Fred and Charlotte.Nelly Shaw in her history of Whiteway Colony describes Fred: " Many people will remember, and with regret miss, the picturesque sturdy figure, with sun-tanned face and white hair and moustache, clothed in a rough tweed kickerbocker suit, who with the inevitable heavy walking-stick, trudged about in our midst. He really looked just like a retired military officer, though a more peacefully disposed man never existed."

In his life Fred had become involved in practically every aspect of the socialist, anarchist and workers’ movements. One fly in the ointment was his uncritical support of the Bolsheviks from the beginning. He wrote in their favour in the pages of Freedom. Unlike Guy Aldred, who intially had such views himself and who then moved to a far more critical position, Fred maintained his illusions until the end. He went on a voyage to Russia, financed by the Colony, as their delegate and returned singing the praises of the Soviet Union. Thus a man who continued to describe himself as an anarchist communist was able to say: at a meeting in Whiteway" In all my lifetime I have dreamed dreams of what this our earth might become, what the future might be, and now I have seen the beginning in Soviet Russia and am content to depart " ( Shaw herself, also from an anarchist background, had similar illusions).
Charlotte, who was some years older than Fred, died in 1924. Later Fred started a new relationship with Margaret Pollock, who he had known in Oxford for some years. She had run a vegetarian store and reform book club there. Fred himself died after a short but severe illness on November 17th, 1934, at Cheltenham hospital.
Sources:
Quail, J. The slow burning fuse
Thompson, E. A. William Morris.
Shaw, N. Whiteway
Nick Heath

I was just wondering if there were any sources to back up the assertion that "Fred was converted to revolutionary ideas whilst serving as a special constable and policing a speech given by Charles Mowbray in Norwich"? I'm currently working on a MA thesis looking at the Glasgow, Leicester, Leeds and Norwich branches of the Socialist League, so it would be a great help! 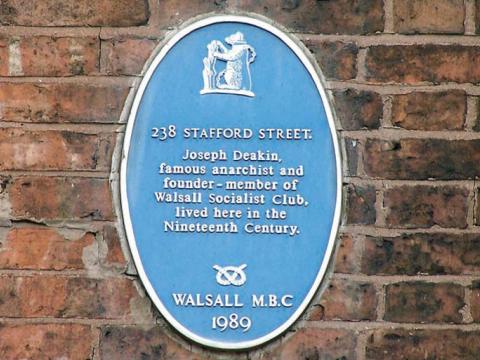