The Cuban national television has just announced this November 26th, 2016 the death of Fidel Castro, who died at the “venerable” age of 90. This counterrevolutionary old fogey will be celebrated in Cuba, where nine days of national mourning is declared, as well as all over the world by the bourgeois international left (i.e. the left and far left bourgeoisie).

We add here our small contribution to the communist critique while publishing a text (that we also translated in English and in Czech) issued in the years 1990 in the central review of the Internationalist Communist Group (ICG) that denounces the eminently counterrevolutionary nature and character of the Cuban “Communist” Party, the “barbudos” and its “Lider Maximo”: Fidel Castro…

We insist at the same time on reaffirming that there has never been any “communist country” in the world and in history. The USSR as well as its satellites of Eastern Europe, China or Vietnam, Albania or Nicaragua, North Korea or Kampuchea, and even nowadays Venezuela, Bolivia, Ecuador and Rojava, were nothing else and even at the beginning of this 21st century they are but a representation of the gross myth of “socialism in one country”, dear to Marxists-Leninists and Stalinists of all kinds. All of them are capitalist from beginning to the end! Because where there’s wage labour, there inevitably exists also Capital and it can’t be otherwise just because there’s also a “Marxist” ideology’s garb, re-organisation of the bourgeoisie through a political party and state and its efforts (with no lasting chance to succeed) to deform capitalist laws of market, competition and value.

The counterrevolutionary action of the Cuban “Communist” Party, the one-party of the Castrist regime, didn’t begin when Fidel Castro declared to be “Marxist-Leninist”. Since 1923 it functioned as “Communist Grouping” at the disposal of international Stalinism. As ever and everywhere in the world, at every decisive moment, these “Marxists-Leninists” stood against the immediate and historical interests of the proletariat. In Cuba there were three decisive moments when the general dictatorship of capital focussed its tyranny against the proletariat and when state terrorism reached an extreme level: under Machado, under Batista and under Castro. And each time, the Cuban “Marxists-Leninists” abandoned the workers’ struggles and attended upon the tyrant.

The absolutism of Gerardo Machado y Morales was characterized by persecution, imprisonment and murders of workers’ militants like Alfredo López (secretary of the Workers’ Foundation of Havana), Enrique Varona, Duménico, Cúxar and others. Against this tyranny, the working class launched a huge battle whose climax was the general strike, which started on July 28th, 1933 and immediately spread to the whole country. On August 7th, in the heat of this battle, Stalinists gave orders to go back to work in return for the legalization of the “communist” party and their unions by Machado himself. The documents were signed by the Stalinist Cesar Villar in the name of the Cuban Workers’ National Confederation (which is the agency of the Latino-American Union Confederation of Montevideo) and were pasted up on buildings columns, street lamps and trees in the parks of several cities by Machado’s police itself. Strike and direct action continued despite calling for peace and on August 12th, whereas the country was very close to civil war, Machado fled with several eminent members of his entourage: ministers, high commissioners of the police and military officials directly responsible for the repression. We have to point out that during the 8 years his of tyranny, Machado could counted on the North-American support, and that at the height of the strike, North-American battleships surrounded the island. But, as it happened so many times, the American government decided to quickly change course. Indeed, Roosevelt’s messenger, Sumners Wells, suddenly started to fight for the democratic opposition’s cause, an alternative that finally appeared as the most obvious solution.

A bit later, Stalinists bowed to Batista who first allowed Juan Martinello to organize the Party of Revolutionary Union in return for a secret collaboration. Then he gave permission for the publication of the Stalinist newspaper “Hoy”. In 1938, the “Communist” Party declared in plenary session that Batista was “not anymore the focal point of the reaction but the defender of democracy”. This was the result of the Stalinist international strategy of Popular Front overtly applied in the island. Following this declaration, Blas Roca (who was already secretary of the Cuban “Communist” Party) and Batista met each other; in September 1938, Batista legalized “communism”. The Party of Revolutionary Union, whose reason to exist disappeared, disbanded in favour of “communism”; and in order to erase in the proletariat’s consciousness the fact that the party totally collaborated with several dictators, it decided to change its name and became the PSP: Popular Socialist Party. During the election campaign of 1940 Batista benefited from the unconditional support of Cuban Stalinists who literally put into practice the policies of the Popular Front imposed by Moscow; in return some of these Stalinists, like Juan Marinello and Carlos Rafael Rodríguez, were (already) nominated ministers.

Before the elections of 1940 the Cuban Stalinists’ position was as follows: “Fulgienco Batista y Zaldívar, who is a hundred per cent Cuban and jealously stands up for free homeland, who is an eloquent and popular orator, (…) who is an authority of our national policy and is idolized by the people that thinks about and watch over his well-being, (…) this man who personifies the sacred ideals of a new Cuba and identifies with people’s necessities through his democratic action, this man conceals in himself the mark of his value.” It’s important to know that those who then sang Batista’s praises (Blas Rocas, Carlo Rafael Rodrígues, etc.) later praised Fidel Castro to the skies and became his ministers. “We will remain faithful to Batista’s platform as a whole”, Blas Roca wrote on January 28th, 1941. And some days later, Juan Marinello declared: “The only men who are faithful to Batista’s platform are those who militate within the Communist Revolutionary Union.” But this love between Stalinists and the dictator Fulgencio was not one-sided. The military knew how to recognize the extraordinary services rendered by the Popular Front. Thus, Batista said for example: “Dear Blas (…) I am happy to confirm you my conviction on the efficient and faithful cooperation towards my government, in the past and the present as well, from the Popular Socialist Party, its leaders and its masses.”

The Popular Socialist Party, legalized and recognized as a state union party, had then all kinds of means at its disposal and it developed itself in a spectacular way. Batista allowed for the first time and quite legally the party to publish a newspaper, to get all legal mechanisms to control the workers’ movement, to elect senators, deputies and dozens of municipal civil servants, to have a permanent presence in all the official advertising authorities and even to be a part of the Cabinet. Thus the PSP became a national force of first importance: the number of the party affiliated members increased from 2,800 in January 1938 to 5,000 in September of the same year and then to 23,000 in January 1939.

Cuban Stalinists supported the bourgeois dictatorship centralized by Batista to the bitter end, and later they provided the fundamental managerial staff of the Castrist state-controlled reorganization. On April 12th, 1958, Fidel Castro, the next to become tyrant, ordered the general strike against Batista, strike that was not followed. The CTC (Cuban Workers’ Federation) controlled by Stalinists forbade it and invoked the same arguments as those used some years earlier to finish off the strike of 1933, which resulted in Machado’s fall. Stalinist civil servants working in Batista's state-controlled apparatus continued to assume their functions and remained deaf to Fidel Castro’s, who was considered as a petty-bourgeois adventurer, appeals. At the same time, the “Moscow News” affirmed that the armed insurrections were nothing but only sparks and that they didn’t weak at all Batista’s power. The Movement of July 26th (1958) itself condemned in August of the same year the “treason” of the Popular Socialist Party. But once the “dirty linen” of treasons washed in private, everybody reconciled in the shade of Castro; and the history of past disagreements has been buried under all kind of lies or untruths. The 20th Congress of the Soviet Union “Communist” Party went up to declare that “Cuban Communists were on the front line of the fight”(Severo Aguirre’s declaration).

It is only when Batista’s fall became obvious and imminent at the end of 1958 that Cuban Stalinists decided to play on both counts. That’s how Carlos Rafael Rodrígues, minister of Batista from 1940 to 1944 and minister without portfolio during the whole Batista’s dictatorship, went in the Sierra Maestra in order to drive an official agreement with Fidel Castro; through this agreement that foreshadowed all those that had to follow, this same Rodrígues became a very important person of Castrist regime. From then on, one of the first measures of Fidel Castro’s government was on January 10th, 1959, to legalize the Popular Socialist Party all over again. We are not going to analyse here the countless internal struggles between fractions within the PSP and the different purges as well, we are not going either to take a look at the numerous fluctuations and U-turns, which brought Fidel Castro, who was deeply anti-communist and formally opposed to the PSP, to entirely submit to Moscow Party’s dictates.

For our readers who may have no idea of Fidel Castro’s political career, let’s remind merely that he was an enthusiastic supporter and a member of the “orthodox” party of Eduardo Chibás, who was a relentless enemy of the PSP. In the following quotation he regarded as enemies and traitors those who had to become soon his closest collaborators within the government and the “Communist” Party.

Castro said about Blas Roca that he was: “Our Daladier”, and he added: “he changes his name as he does for his political colour and he changes more often his tactical line than his shirt. He is a politic chameleon. One day he criticizes militarism, the next day, he defends it…” Castro didn’t hesitate therefore to regard the whole party and his future collaborator Blas Roca as traitors of the proletariat cause: “Those who trumpet their leftism and their love of the people (…) turn their back on the workers and humbly stand at Batista’s disposal and his military heel (…) No one can prevent me from shouting the truth to the face of these profiteers, merchants of the proletariat…” And they hadn’t to stop being “merchants of the proletariat” when they were later under Fidel Castro’s thumb.

On the contrary, it is in the end the totality of the party (including Blas Rocas, Carlos Rafael Rodrígues, Anibal Escalante, this “Muscovite Communist” who had since ever plotted against Castro’s regime, etc.) that ended up, despite the appearances, to turn Fidel Castro into a real vassal of Moscow, an additional “merchant of the proletariat”.

Here is what Fidel Castro declared (shortly after his famous speech for his defence “History will absolve me”), whereas he was detained in Mexico on requests of Batista’s police that accused him of being a member of the “Communist party”: “Which moral conscience does mister Batista have to speak about communism whereas he was a candidate of the Communist Party for the presidential elections in 1940, whereas their electoral posters took shelter under the sickle and the hammer, whereas he appears on pictures while walking with Blas Roca and Lázaro Peña, whereas half a dozen of his current ministers and reliable collaborators were important members of the Communist Party?”

Here are the basics and the background of this historic alliance that turned the “Communist” party into the fundamental party of the Cuban capitalistic state. 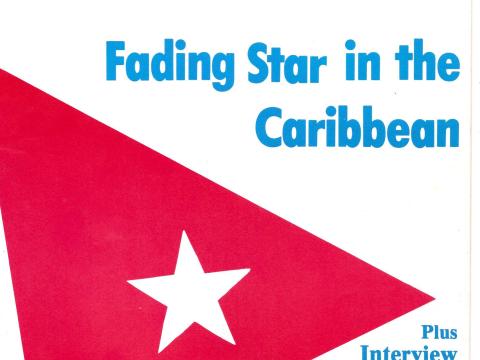 A 1986 left-wing critique of Cuba as state capitalist, dependent & dominated by Russian imperialism, and still burdened by racism, sexism, and…

The recurring theme of forced work for the unemployed.
Image 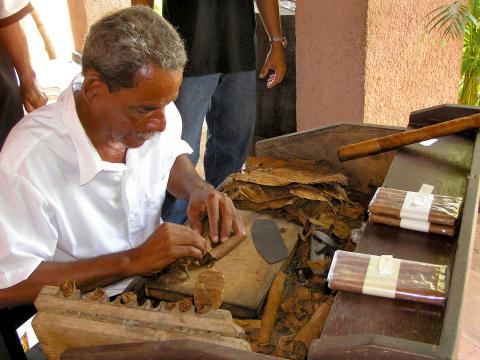