A member of Solidarity criticises 'elitism' in the organisation.

This small piece is occasioned by the’ Solidarity’ Conferences of Liverpool and Oxford, both 1976, and by the written offerings of some of the members that appeared during the same period.

Although the supposed topic for discussion at Liverpool was the events in Portugal, the conference was dominated by the recent expulsion from its ranks by Solidarity (London), of Joe Jacobs. It seemed to be resolved in the light of discussion, that, while there was no question of expelling Joe from the national organisation, the time was ripe for a discussion on the problems of elitism within any organisation such as Solidarity, and that this discussion should take place in Oxford. We were given to understand that many of Joe’s ideas were in sympathy with those expressed in a pamphlet by Henri Simon, entitled “The New Movement”.

Some time before the Oxford conference, “The New Movement” was circulated, followed shortly by a justification of resignation from the, London group by Dave Brown, entitled “The Illusions of Solidarity”.

The Oxford conference signally failed, in my view, to discuss very much of what it was supposed to. Quite apart from this fact – which will be returned to – the pamphlet “The New Movement” failed to add anything of significance to the Solidarity critique – it was largely unexceptional. What seemed to me to be one of its main points of issue (at the end of Section 21) – whether Henri Simon was arguing for an end to groups, or for a plurality of them – didn’t even get discussed (or if it did, then it was in such abstract terms as to be missed by me.) Simon himself seemed to see little point in coming over to play the expert (a category of the division of labour if ever there was one!) to a Solidarity conference (“Talk us through this one, Henri?”), and I agree with him. However, I hope he found the experience of meeting and talking to Solidarity members worthwhile.

To return to “The Illusions of Solidarity”. There seem to be two aspects to Comrade D. Brown’s offering – or rather to my criticism. Firstly, an internal critique (that word again), and secondly, an external one, although the two cannot really be distinct. The first would involve refutation of the ideas, examination of the internal logic, criticisms, etc. That, we in Swansea have every intention of doing, but not here. The external criticisms are ones of style and presentation. Comrade Brown’s piece could have been a brilliant theoretical masterpiece – but you would never have known! The document featured, consecutively (within 11 pages) an “Explanatory Introduction”, ”Footnotes” to the. E.I., then, at last, the actual article, “To the membership of Solidarity (London)”, “Footnotes” to the article, “Afterword” and “Appendix”. The major grouse seemed to be, that an article for publication had been rejected by the London group without “adequate” reasons. If this was so, it is in itself, of course, lamentable. However, we in Swansea feel justified in suggesting that any article written in such a manner should be rejected on grounds of style, and we would. like confirmation or denial as to whether the article in question was in fact rejected on such grounds – either wholly or in part. Furthermore, Comrade Brown’s(?) contribution at Oxford demonstrated that the style of “Illusions..” was for him, a normal mode of discourse. Quite apart even from its inappropriateness in an academic context, such a style is quite out of place in Solidarity – verbally or in writing. And this brings us directly to the original raison d’etre ·of the Oxford conference: Joe Jacobs’ comments and criticisms at Liverpool: Is Solidarity (London) an elitist organisation? – and by implication any other autonomous group, or the national organisation in time, or any other group like Solidarity?

It seems to me that elitism can arise in two main ways, neither of which excludes the other. (Hopefully, some of you reading this may be able to suggest aspects that I have missed.)

The first follows from my comments on “The Illusions of Solidarity”, and also from the Oxford discussion on “The New Movement”. Elitism can be intellectual, in this case. I would characterise intellectual elitism as the domination of a small number of people within a group, by virtue of academic training and familiarity with philosophical concepts – bolstered and worsened by the use of what amounts to the use of a linguistic secret code (or ‘jargon’, to be rude), which is virtually indecipherable to the majority of members, and, which. is worse, to the rest of humanity. (And here I add perhaps an obvious point, that if this small contribution is just as indecipherable, then I shall accept richly deserved criticism.) The Oxford discussion on “The New Movement” positively oozed this sort of elitism, and this was reflected in a mood of frustration at the end of the conference. We shared that mood, were amongst those who voiced it, and have written this in consequence. Intellectual elitism ultimately leads to the domination of a few self-appointed gurus, and a rapidly dwindling majority of pissed-off members with no access to the jargon. And unless Solidarity wants to become a sort of libertarian “New Left Review”, it must recognise that in voting with their feet, the pissed-off majority are in the right. (By implication, of course, this holds true for the rest of humanity, except for a few thousand parasitic academics who get, their buzz from mental wanking.) Emphatically, this does not mean an end to theorising. What it does mean’ is that all members have the right to discuss ideas they are all fully capable of understanding in the sort of language that is acceptable to the world at large. Any ideas or theories worth discussing can ultimately be translated into everyday language, and as far as I am concerned, this applies in principle even to Hegel! Perhaps a few of us should try? We need no intellectual vanguards, and one of the conditions of dispensing with them is to render any decent ideas from the past (let alone the present!) into normal language so that the gurus are out of a job for good. I scarcely need add that this does not mean churning out quotes and challenging the rest to go and look them up in Volume XXXVIII, p.387 para. (2) of the Collected Works or whatever. But until they are comprehensible, these thinkers will remain unread – deservedly so, since they never wrote for a mass audience in most cases. Most nembers of society are capable of learning through experience anyway. Nevertheless, it is often helpful, even in the University of Life (as they say), to know that others have been there before, and tried to give an answer. But the ability to give the answers of the past sone thoughtful consideration is crucially dependent on finding out what the hell they really said. Solidarity should not be in the business of adding more bloody jargon to what is already there!

The second way in which elitism can arise is the source of Joe’s concern. Where an autonomous group has existed for a number of years, it is almost certain that those who helped found- it will develop a psychological (if not a financial) commitment to the group they kept going. Such commitment, probably unconscious, would be quite compatible with an intellectual conviction that the group must not become an end in itself – it would merely be yet one more manifestation of the alienation of social relationships that exists in our society. While it makes a conscious effort to be less so than most, internally Solidarity can no more be totally free from this alienation than any other organisation, otherwise there would be no need for a revolution. But the manifestation of commitment may be elitist in the sense that control of the group passes into the hands of those with such commitment, alienating those new to it, or less committed, so that the group becomes a tight-knit nucleus, around which floats an unstable periphery. It is unstable in the sense of having a high turnover of members while staying roughly the same size. Here it must be admitted that peripheral members may not in fact leave through dissatisfaction, but rather feeling that, while they have gained something through membership, it is time to move on. This would however, indicate a rather static, “educational’ role for the group?

My conclusion is briefly stated. The only preventive to elitism is ultimately the level of consciousness of members (all members!) and their readiness to say “Enough!”. In a practical sense this may mean different organisational forms at, for example, a national conference. It seems obvious that the large meeting inhibits many people from participating, in a way that small groups do not. Many people are naturally diffident, and hesitate to try out their ideas. Such diffidence cannot but be reinforced if a discussion is characterised by a high degree of jargonising and general mental wanking. This being so, the majority stays quiet, and. the way is open for the rise of the guru (or bore). Unlike Joe, I am reasonably optimistic that Solidarity can cope. Those with tendencies to elitism are, in principle, capable of recognising it in themselves, and everyone else is capable of pointing it out to them, and, I think, must, and will, do so.

Footnote: (for those who feel a piece of writing is naked without)
A.B.’s wardrobe by “Orgasm” of Port Tennant, Fabian Way, Swansea. 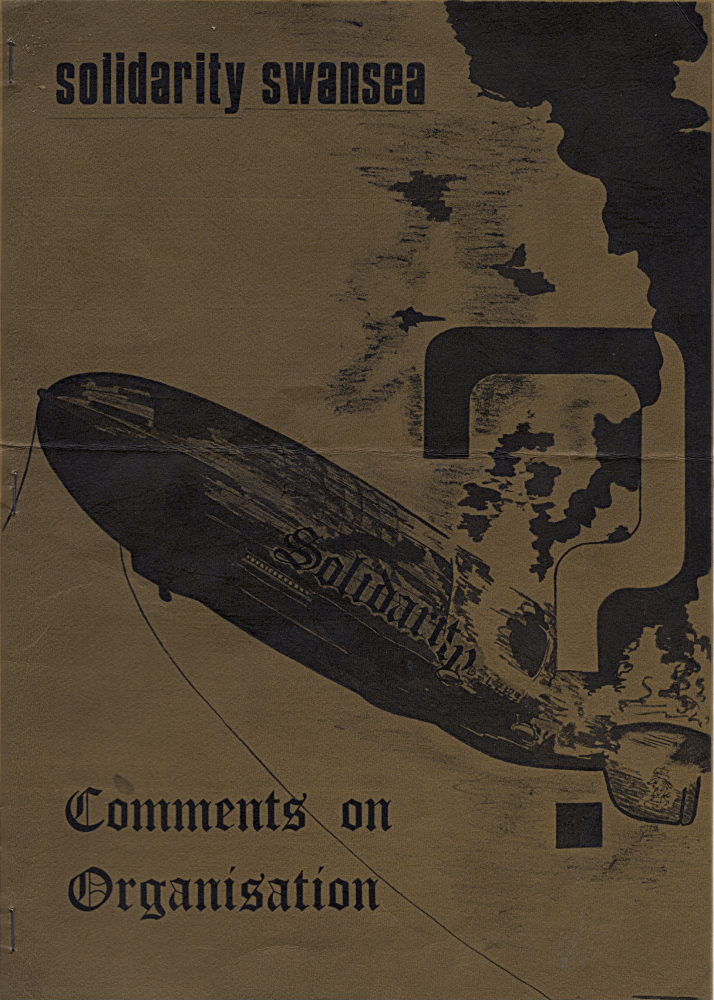 Intellectual elitism ultimately leads to the domination of a few self-appointed gurus, and a rapidly dwindling majority of pissed-off members with no access to the jargon. And unless Solidarity wants to become a sort of libertarian “New Left Review”, it must recognise that in voting with their feet, the pissed-off majority are in the right. 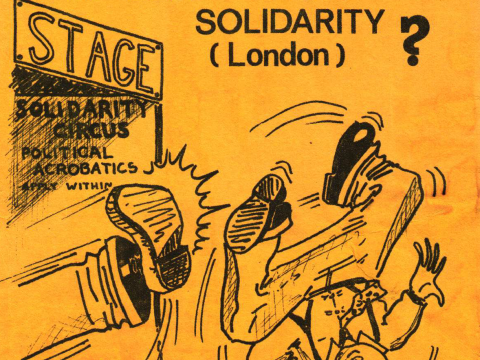 Why was I expelled from Solidarity (London)? - Joe Jacobs

Statements and correspondence about the explusion of Jacobs from the group in 1975.

The illusion of 'Solidarity' - David Brown

David Brown's letter of resignation from the Solidarity group, and critique of the groups' - and by extension Cornelius Castoriadis' - fundamental misunderstanding of Marx's critique of political economy.

After Camatte/Collu's 'On Organisation' was published in Detroit in 1974 there was a debate about it over several issues in Fifth Estate. Joe Jacobs, a former Solidarity(UK) member, had been reflecting on the 'organisation question' for a long time prior to reading this debate and he sent them a contribution partly based on some previous writings. Before it could be published in June 1977 he died. 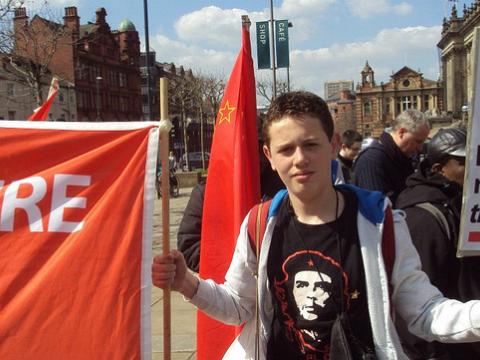 The impotence of the revolutionary group - Sam Moss

Article arguing that the day of the revolutionary party is over, and that "revolutionary" groups exist today, as long as they are powerless,…