West Virginia teacher and strike organizer Michael Mochaidean argues against an interpretation of the recent wave of teachers' strikes that links them to the 2016 Bernie Sanders campaign. This article was originally published by the Black Rose Anarchist Federation.

On a recent interview with the Dead Pundit Society podcast, episode “Teachers Strike Wave 2019: Denver Edition w/ Eric Blanc” writer and journalist Eric Blanc argued that the recent wave of education strikes are directly related to the 2016 Bernie Sanders campaign, and through this, DSA as a whole. In the interview Blanc reflects back on the February 2018 West Virginia teacher strike that have since sparked a wave of teacher strikes over similar issues.

In the interview Blanc broadly connects the strikes to the Bernie Sanders campaign and draws a very direct connection to the West Virginia strike:

“… if you look at the Bernie Sander campaign and the support that it got in places like West Virginia or Arizona, where [Sanders] won handily, there was clearly an indication that significant sectors of working people, and young people, were looking for a different type of politics … for whatever seemed like a viable alternative to politics as usual. And so the Bernie Sander’s campaign … galvanized a lot of people and some of the most important people that it galvanized were in fact the small group of socialists that launched and initiated the West Virginia strike. The core group of organizers that for months built up to the West Virginia strike first got involved organizing with each other through the DSA and that DSA was born basically out of the Bernie Sander campaign.” 1

Blanc’s assessment of this relationship between the Sanders campaign, DSA, and the teacher strikes is his connection between the small group of socialists in the Kanawha Valley DSA, particularly one of the strike leaders, Emily Comer, and their political bridge-building between Bernie’s campaign and DSA politics.

Assumptions on the Strike

Blanc assumes a number of things about the 2016 Sanders campaign in West Virginia. For one, during the Democratic primary West Virginia’s 55 counties went to Bernie, with Bernie receiving 51% of the vote to Hillary’s 36%. Trump would later go on to win all fifty-five counties, but this time at a rate of 68% to Hillary’s 26%. Rather than viewing Sanders’ success in the primary as indicative of a revolt against establishment figures such as Clinton, Blanc argues that this campaign reached the economic best interests of the white working class – but the numbers certainly complicate that narrative.

More critical to the narrative of the West Virginia strike is that Blanc attempts to draw a direct line between two teacher organizers, Jay O’Neal and Emily Comer. Both Jay and Emily are indeed DSA members and were politicized in many ways from the Sanders campaign, but what this narrative leaves aside is the countless others who were politically active but were not members of DSA or participants in the Sanders campaign.

Nicole McCormick, an active union organizer and co-founder of the Facebook page where most of the initial West Virginia organizing took place, is not a member of DSA, nor are Erica Newsome, April Estep, or Alec Hunt – all moderators and original members of the page. What did make the West Virginia strike successful was less about ties to the DSA and Sanders and more about the necessity for an online platform to unite disparate and disenchanted union members across the state, many of whom were angry at the 2016 election results and West Virginia Governor Jim Justice switching parties from Democrat to Republican. To write the story and draw connection of the West Virginia teacher strike from the standpoint of simply one or two organizers paints a narrow portrait of the struggle and weaves a misleading picture that is more favorable to a future Sanders’ campaign, which Blanc supports. 2

Blanc also explains the 2018 walkouts in a way that covers up much of the organizing that took place in other states which were not tied in any way to the 2016 Sanders campaign or DSA.

Take Katie Hancock for example, a Kentucky social worker and founder of the secret online Facebook page ‘United We Stand.’ Hancock initially created the page in the summer of 2017 after becoming irate at Governor Bevin’s attempts to privatize and overhaul the state’s pension program. Not wanting to be as openly political as others, Hancock chose to create a page that would go on to connect thousands of social workers across the state to fight this reactionary piece of legislation. This was the precursor to the organizing tool – KY 120 United – that was started by Hancock’s comrade, Nema Brewer. Neither Nema Brewer nor Katie Hancock are members of DSA, nor is it clear that either of their organizing goals were influenced by the 2016 Sanders campaign.

This is the case, too, with Rebecca Garelli, an organizer with the Arizona Educators United Facebook group that inspired a statewide strike there. Garelli was a teacher in Chicago during their famous 2012 strike. In many ways, the Chicago Teacher Strike (2012) was the culmination of various strands of organizing – Occupy, social justice unionism, anti-privatization – that were occurring at the time. Yet, their success was not tied to any one socialist organization or political candidate, but a decentralized and politicized base of militant activists. Garrelli took this experience with her to Arizona, where the story of struggle against the dual forces of racism and privatization stood with her as this strike progressed.

What appears to be more at stake here is laying the groundwork for Sanders’ current presidential run. By tying the recent upsurge in militant unionism to Sanders, it will be easier for those who advocate within the left for backing the Sanders campaign in the Democratic Party primary – and a critical junction for this is the current debate within the DSA to throw its weight behind Sanders early on.

After all, if history remembers these strikes as the result of Bernie’s unsuccessful yet inspiring run, then his current run should be backed whole heartedly by the left as promoting future waves of strikes and class struggle. This historical revisionism is dangerous in that it both obfuscates the reality of these struggles and is, in many ways, a move to isolate Bernie from meaningful left criticism.

Michael Mochaidean is an organizer and member of the West Virginia IWW and WVEA. He is currently co-authoring a book detailing the 2018 education walkouts, their triumphs and limitations one year later.

For further reading on teachers struggles and left electoralism we recommend “Strike To Win: How the West Virginia Teacher Strike Was Won” and “The Lure of Elections: From Political Power to Popular Power.”

[quote=Leon Trotsky]The historical crisis of mankind is reduced to the crisis of the revolutionary leadership (from The Death Agony of Capitalism and the Tasks of the Fourth International [1938]) a.k.a. "The Transitional Program"[/quote]

His father, Alan Benjamin, is the leader of the Socialist Organizer Party (click on the link for all the internecine sectarian details). He's also the OPEIU delegate to the San Francisco Labor Council. So basically, his dad is a piecard. And a disingenuous one at that. During the attempts for coordination to oppose Governor Schwarzenegger's gutting of the public sector --especially schools -- after the economic crisis 10 years ago, we attempted statewide action on March 4, 2010. Socialist Organizer caucused with the ISO and all their Trotskyite brethren to undermine anything radical from occuring. To a person, the Trot mantra was "workers aren't ready" to struggle, strike or resist in any way. Why? As the Trotsky quote alluded to, they didn't have proper "leadership." Which translated means: the Trot groups hadn't recruited enough cadre to execute their boring-from-within-the-unions plans, nor did they have sufficient numbers to manipulate mass, open meetings -- yet.

Here's a quote by myself:

[quote=Hieronymous]On April 24th [2010] in Los Angeles, at a statewide planning meeting for the post-March 4th struggles around education in California the fucking ISO did same bullshit that they always do. As in, caucusing with the other Trot groups [including Socialist Organizer] behind the scenes to vote as a vanguardist bloc, fighting tooth-and-nail against any mention of "general strike" or even "strike" or "walkout" in our proposals, and scheming to bring the whole movement under their control so that they can stack future meetings and conferences and pull Robert's Rules parliamentary tricks to control the agenda.[/quote]

Rico's mom is Lita Blanc, who recently retired after having been president of United Educators of San Francisco, the union for public school teachers, for 3 years. So the desire for all-mighty positions of leadership runs in the family.

Blanco graduated from UC Santa Cruz more than 10 years ago, but when Socialist Organizer later wanted to recruit from City College of San Francisco, Rico enrolled and threw himself into campus politics. When students attempted to do brash things like occupy administrators' offices, Rico was always ready to be the sound of reason and throw a wet blanket on the action, reminding everyone that "people aren't ready." The ol' manta to indicate enough cadre hadn't been recruited to follow "leadership." They weren't ready -- yet -- to infiltrate pre-existing groups, set agendas behind the scenes, stack meetings, and invoke "Robert's Rules" when parliamentary manipulations were called for.

Eric "Rico Blanco" Blanc has built his career as a field representative for Socialist Organizer, kinda like a red diaper trustafarian (living without wage labor as a de facto trust fund kid supported by his parents), who broke onto the scene by using unprincipled maneuvers to prevent not only strikes, but even the mention of radical direct action, is now attributing the "leadership" of a growing strike wave to Bernie Sanders. How fucking ironic! And now he's jetsetting around the country and positing himself as an expert on these strikes -- which is loony-tunes crazy!

What did make the West Virginia strike successful was less about ties to the DSA and Sanders and more about the necessity for a... platform to unite disparate and disenchanted union members across the state. 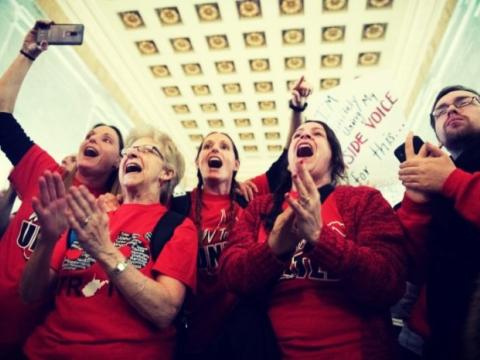 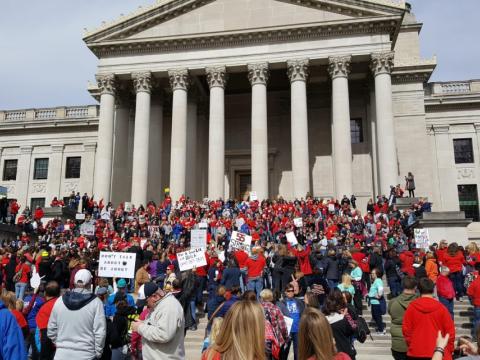 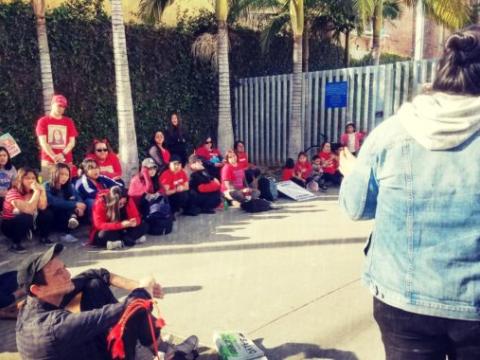