The East, directed by Zal Batmanglij

Green Shoots. Film review - Tom Jennings
This slick and highly original US indie film cleverly twists genre conventions before collapsing under the weight of exaggerated and conflicting expectations. Social issue laments for ecological destruction morph into contemporary espionage and conspiracy, then heist thriller and action movie, as Sarah - Brit Marling's initially conservative intelligence operative - infiltrates a clandestine band of hippie anticapitalists plotting increasingly murderous punishments for greedy conglomerates guilty of outrages against the natural world (oil spills), human environment (chemical waste) and bodies (drugs with lethal side effects) by visiting the same blights on the persons of their chief executives. Perpetrators and victims on both sides deploy comparably skilful information-gathering and PR, but the stunts devised by our unfeasibly effective and secure internetworking activists are so successful as to force corporations to change policies or face plummeting share prices. Still, no agenda beyond a slightly 'kinder' capitalism appears on the horizon, and to be sustainable even this requires Sarah's shifting loyalties to appeal to the ethics of her peers - scant reward for a presumed multitude of (or even these few) militant lives devoted to saving the planet.
*
The handling of acutely topical themes with an arguable degree of realism, along with explicitly oppositional responses, has been interpreted by critics as inaugurating a 'post-Occupy' cinema, despite being conceived and developed well beforehand. Nevertheless, though aiming to flatter younger environmentally-concerned publics - and correspondingly overhyping the ease with which their virtual techno-savvy translates into concrete real-world results - the narrative predictably recuperates any 'direct action' propaganda value by patronising and ridiculing its protagonists even while tentatively legitimising their grievances. So co-writers Batmanglij and Marling spent a summer hanging out with New Age dropout freegan types to flesh out their titular anarchistic eco-terrorist rural guerillas - yielding rich-kid cult-fanatic characters self-righteously propping up fragile egos with childish rituals substituting for organic sociality, solidarity and community. Yet even these more or less likeable fools scare the shit out of the rich and powerful, implying that their tactics have traction where respectable alternatives conspicuously and miserably fail.
*
Sadly, perhaps to broaden commercial viability, the film's potentially fertile political exploration is squandered in pandering to tame liberal complacency. However, the denouement is far more implausible than the likely efficacy of the 'extreme' vision on offer, despite no meaningful ideology or strategy among its radical proponents ever being enunciated - their Old Testament 'eye for an eye' justice implying neither cure nor prevention, as well as depending on impressive well-funded logistical capabilities for a small autonomous cell apparently motivated largely by Oedipal self-obsession. Meanwhile, the daft idea that thoroughly Machiavellian corporate entities, private or governmental, would countenance rogue employees stealing personnel data wholesale and suborning colleagues via globetrotting exhortation to moral conscience surely, if unwittingly, similarly reveals the tired limits of timid reformism. Viewers may conclude that neither choice is anyway within their realm of personal possibility - with cynical passivity an intelligible reaction even if The East entertainingly raises questions mainstream cinema normally avoids.
*
Review first published in Freedom, Vol. 74, No. 8, September 2013.
For other reviews and essays by Tom Jennings, see:
www.variant.org.uk
www.tomjennings.pwp.blueyonder.co.uk 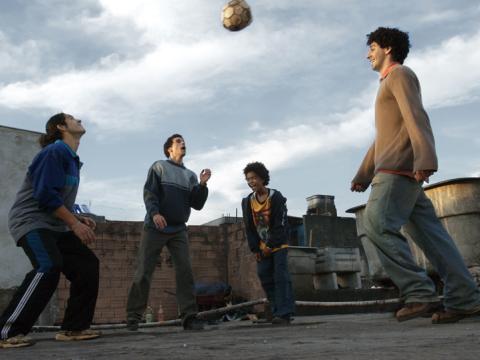