The Hard Labour of Love

An impressive first feature by director Sérgio Machado, Lower City strives to express the predicament of the modern Brazilian underclass adrift without social, family or government support, but somehow mustering the motivation to persevere. With its love triangle inspired by Truffaut’s Jules et Jim, the film’s naturalism (spoiled by hamfisted subtitling) avoids ‘state of the nation’ polemics, explicit political commentary and objectifying social realism, with a superb fusion of form and content benefiting from half a century of independent filmmaking alternatives to Hollywood spectacle. Its very rare achievement is to effectively condense the desperation of entire strata into three marginal lives without pathologising, psychologising, moralising, sentimentalising or heroising. Instead, in crystallising self-destructive inadequacy, the energy generated from the collision of passionate affinities is presented as a precious source of shared courage and potential.

Fiercely loyal childhood friends Deco (Lázaro Ramos) and Naldinho (Wagner Moura) ply a cargo trade along the northeastern coast. Karina (Alice Braga) hitches a lift to Salvador, the provincial capital, paying by having sex with them both. When Naldinho is stabbed protecting Deco from racist attack, her altruism and care adds mutual loving recognition to ecstatic release. The negotiation of this shift means re-evaluating priorities and perspectives on life, and they orient differently to the shared dynamic of yearning. Naldinho is impulsive and reckless, with love representing self-control to be achieved by proxy in looking after Karina. Deco is less patriarchal, seeking reciprocal caring and containment. Karina, meanwhile, insists on autonomy – demanding friendship, sexual satisfaction and sufficient security to relinquish control. Openly acknowledging for the men their and her vulnerability, her refusal to abandon either of them holds the story together while seemingly preventing resolution.

The dilemma is accentuated by untenable economics, which Deco and Naldinho displace onto their relationship with Karina. They consider selling their boat, which like their ‘brotherhood’ no longer sustains them outside of lucrative illegalities. Deco boxes for a local agent, but has to throw prize bouts against lesser talents with better social contacts. Naldinho embarks on small-scale hold-ups, but the risks far outweigh paltry rewards, especially when ripped off by the local godfather. Karina works as a stripper and prostitute, with the most developed sense of community shown among her co-workers in the nightclub. Then, when she becomes pregnant, both men flatter themselves as individual ‘saviours’. Violence ensues as neither can modulate their envious ‘marriage’ fantasies. Deco’s fighting career is an expedient outlet for his frustration at the elusiveness of equilibrium, allowing him to offer Karina tenderness without strings: a heartfelt offer of shared childrearing; the sexual gift of cunnilingus; and consistent concern for her welfare as much as his. Naldinho’s paternalistic bravura, however, crumbles into infantile rage with the collapse of his delusions of criminal grandeur.

The wider social structures enclosing the trio are efficiently sketched in their illicit drudges earning a crust. Karina’s situation is most complex, and the tricky intersection of erotic display, prostitution and sexual romance is cleverly handled without moral judgement. The advising Bahia Association of Sex Workers surely helped sidestep stereotypes of exploitation and abuse, with the prostitutes forging some agency in their work and in the ways it overflows into personal life. As practical economics, any personal degradation is contextualised by the available options – familiar to women everywhere whose only remaining resources reside in their sexualised bodies. Conversely, the clients are pathetically at the mercy of lust covered up, for example, with macho bluff and bluster. Explicitly marked as defensive reactions to vulnerability and neediness, this is alternately tolerated, impatiently dismissed, or reversed in manipulative hustling (most enjoyably in the simulated drug overdose scam). Better-off customers are inadequates to be pandered to, with the hypocrisy of bourgeois mores typified in one client’s impotence and suicide after showing Karina family snapshots.

This episode exemplifies institutional complicity with sexual commerce when the nightclub madam bails Karina out after the local police threaten her with trial for drugs offences. She realises that she is caught in a trap arising from servicing the needs of others. Her ambivalent desires to do this while being looked after as well as valued romantically and sexually – which all seemed conceivable with Deco and Naldinho – are under attack from the diversely intransigent pressures of legal dictate, economic survival, biological reality and social complexity. Her immediate impulse is to flee ‘up north’ to the Amazon – a mythical land of riches (‘gold nuggets for blowjobs’) free from official rule and the law of the father – with colleagues providing solidarity (e.g. abortifacient pills) and companionship, leaving behind men’s fatal inability to relinquish childish self-absorption.

Ultimately, though, this wish-fulfilment dissolves, along with her hard-nosed facade of self-sufficiency, into uncontrollable tears as she tends the wounds from Deco and Naldinho’s mutual battering – they too being unwilling to surrender intimate caring to perpetual paranoia and predation in the war of all against all. By extension, the film also highlights what political philosophy has long ignored or downplayed – the critical role of women in social and cultural (as well as sexual and economic) reproduction – and hence in the prospects for political advance at all levels. The exchanges of sidelong glances in Lower City’s final extreme close-ups then imply a dawning shared understanding that the trio can only move forward together. But rather than the destructively vicious circles of The Good, the Bad and the Ugly, or the comfortably pretentious superficiality of Jules et Jim, the social engagement of suffering bodies, minds, hearts and souls might yet generate the synergy necessary for a better life to be wrought from the hard labour of love. 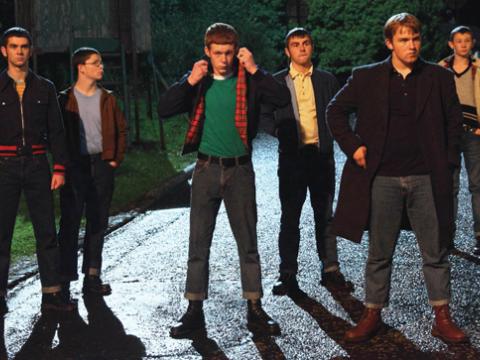