The Edinburgh Muckraker was produced by an independent group in solidarity with council workers, to inform the people of Edinburgh what is really going on behind the lies, mis-information and threats.
This issue is from early 2010. The text is below and the print version attached as PDF.

Equal Pay, Not Low Pay
On 5 January 2010 Mark Turley, Director of Services for Communites for the City of Edinburgh Council informed council staff that the Council has moved into a process of Statutory Consultation to reach an agreement on Modernising Pay proposals. Should no agrement be reached during this 90 days consultation period, the Council will issue a 90 day notice to both manual and office workers.
With employment law being employers law at the end of the day, 90 day notices are the employers finest get out of jail free cards and has been widely used by employers undertaking Single Status.
What it means is that employees are issued new contracts to sign outlining new conditions. If an employee does not voluntarily sign up to the new conditions then contracts are changed unilaterally after 90 days without further attempts at negotiation and any changes will take place regardless with changes to pay kicking-inin 3 years' time. It is known as 'imposition' and the only way to oppose them is through industrial action. Edinburgh Council have invested the LEAST AMOUNT in Single Status in Scotland and are now trying to impose new contracts that will leave women no better off, leave the highest paid untouched, and leave the lowest paid with wage cuts of up to £6000.

Two Sides To Every Story
Edinburgh Evenings News recently reported that the bin men had ‘walked out’ due to the recent weather conditions. This is simply not true.
Refuse Collection Drivers & their crews were instructed by Edinburgh Council that they must complete their domestic bin routes or they would not receive full pay under the 'Partial Performance' detriment brought in near the beginning of the dispute which resulted in Unite's 'Work to Contract' Industrial Action.
Bin workers had requested that routes be assessed by the Health and Safety Officer. 'Partial performance' has been used during the dispute to dock the pay of workers – even when they were signed off sick by their GP with medical certificates – so assurances were sought from management that anyone injured while on duty would not have their pay docked. By midday the Acting Operations Manager, Hollman, told the workers that they weren't going to wait around any longer and so he sent them home.
Fears of injury were legitimate­ – several workers have been injured due to the roads and pavements being covered with hard packed snow and ice.

Thatcherite Turley 'Man of Steel'
The Evening News showed their true colours again recently when Sandra Dick interviewed the 'man of steel', Mark Turley. This followed Turley’s illustrious career as a debt­ collector in Sheffield at a time when miners faced great hardship, to Director of Services for Communities for City of Edinburgh Council.
Dick paints a picture of a tough, capable, family man who we can trust to handle these militant no­gooders who she feels have had it too good for too long with their "cushy job".
The Muckraker would hazard a guess that Dick wouldn’t swap her current employment for a cushy career in refuse collection, but it makes you wonder why she clearly resents the workers enjoying the ‘benefits’ that they once had. Dick shows her thoroughness by failing to ask who approved the routes, shift patterns, and the terms and conditions in the first place, and what reasons there could have been to do so. Dick is not on her own in seeming to want the Council to get on and smash these workshy remnants of 70s militancy and do anything within their means to do so. These workers should count their lucky stars that they have a job at all, shouldn’t they? Good job the employees can count on the Councils Head of Resources, Philip Barr, who told the workers outright that they were not worth the money they're paid.
As every low­earner will recognise, the prospect of losing a third of their wage is a frightening one. This is a struggle to preserve security and not a fight for more pay. As mortgages are tied to current earnings, slashing salaries risks people losing their homes through no fault of their own. So as RBS bosses and other bankers get their bonuses, and as Turley on his cushy current salary of £120,513 plus expenses, along with the other 1,600 high­ earners that cost £1.25 in every £100 spent on services in Scotland, still bring home obscene amounts of money, manual council workers have the nerve to stand up and say no to losing a third of their pay. The cheek of it! No wonder Sandra Dick is getting behind a “modern day, local version of Thatcher” to put an end to this greed.

STREET CLEANERS STAND FIRM
Despite huge efforts by the Council management to divide the street cleaners and the refuse collectors, the vast majority of the street cleaners are standing firm and maintaining the overtime ban and work to rule.
In late December a street cleaner told The Muckraker that out of around 200 street cleaners there were only 7 or 8 scabs.
“Management have 7 or 8 scabs working at the Seafield depot, they’re kept away from everyone else. The Council says they’ve happy no money but they're happt to give these scabs money to do phantom work for work, they’re making up work for them to do.
“The Council’s trying to encourage other workers to scab – but this has made a lot of people dig their heels in,“ the street cleaner explained. “The scabs have isolated themselves. They’re happy to take the benefits of being in the Union but they won’t make the sacrifices. We want them kicked out the Union the Union official says that's not how Unions conduct themselves. But that’s what we want, we want them expelled.”

CONTROVERSIAL CARE AND SUPPORT TENDER COLLAPSES
The heavily criticised tender process for care and support services was finally dropped today. The process, which would have seen the transfer of vital services for 800 vulnerable adults transferred to new, cheaper providers, was suspended in December pending an independent evaluation.
Council Chief Executive Tom Aitchison concluded that the findings of the report left the Council with no other choice but to drop the whole tender process.
The report, which is being kept confidential, found that that the process was not sufficiently “meticulous” as well as casting doubts over the “quality assurance process”.
The collapse of the tender has led to campaign groups and opposition councillors calling for the resignation of Paul Edie, the City’s health and social care convener.
A member of Edinburgh Support Workers’ Action Network (SWAN) told the Muckraker:
“We have been saying this process was flawed all along. This has now been verified by an independent evaluation but were it not for the tireless campaigning of service­ users and care workers the tender would have been pushed through months ago. Paul Edie described the process as “robust” as recently as December. Now the Council has spent £80k of taxpayers’ money on this independent report. £80k could provide a 10 hour support package for 10 vulnerable people for a whole year and yet it has been wasted on discovering that Paul Edie’s process was not as ‘robust’ as he has been telling us”.
Unelected Council officials have also come in for criticism for overseeing the process and making recommendations which are now seen as discredited, SWAN told us:
“We think it’s disgraceful that people like Peter Gabbitas and Mark Turley who earn over £120k have tried to use a flawed process to target those on low incomes and people with disabilities who depend on good quality services and we call for them to be brought to account for their actions”.
Whilst they are celebrating this victory campaign groups say their fight is not yet over. The Council still intends to use Direct Payment rates based on the flawed tender process to reduce funding to services. With continued protests and legal challenges promised this is proving to be an issue that will not go away for the City of Edinburgh Council.

WORKERS RESIST COUNCIL BULLIES
City of Edinburgh Council are using a combination of threats, lies and cunning to try and harass the street cleaners, refuse collectors, gardeners and other manual workers into accepting pay cuts and worse conditions. Street Cleansing, refuse collection workers, Road Workers, waste disposal workers, Gardeners, Toilet Attendants, “Specialist Services” and Gravediggers are all affected. Chief hitman is Director of Community Services Mark Turley (annual salary £120,513)
GUN TO THE HEAD
A street cleansing employee (annual salary £19,212) writes:
“The council are using 'gun to the head' bargaining and I for one will not be bullied into agreeing to a deal that would see my family lose thousands of pounds and miss out on crucial family time with my wife and four young children.”
HOCUS FOCUS
The Council have set up a series of “focus groups” to try and con the workers into agreeing to a worsening of wages and conditions. Central to the Council strategy has been an attempt to divide the refuse collectors (bin men and women), traditionally seen as a well­ organised group, from the street cleaners and other workers. The age­-old bosses’ tactic of divide and rule.
On 22nd December Mark "Lying Toad" Turley claimed:
“I think it is fair to say that everybody has found the staff focus groups a very useful way developing of looking at proposals for Future State and these will continue...”
THE TRUTH
A street cleansing employee who has been directly involved in the 'Future State' discussions writes that "I have found each and every meeting to be nothing more than a 'Management talk shop'."
“Management reckon that because of the threat of 'Philip Barr's Job Evaluations', staff are so desperate that we can be conned into accepting their proposals. This the same evaluation process that will see Management receive substantial pay rises while others will lose thousands.
“Under these proposals Street Cleaners would have to work more unsociable hours and the majority of staff would still lose thousands of pounds after a 3 year pay freeze.
"I have been more than conscious of the potential 'divide and conquer' strategy of Edinburgh Council management (attempt to crack a deal with street cleansing, alienating our colleagues in Refuse Collection). Being a party to this could never ever be an option. All the proposals are totally unacceptable.“
THE MUCKRAKER SAYS
It will be vital that workers themselves organise to make sure that the workforce are not bullied or hoodwinked into accepting cuts in wages and conditions. A grass­roots workers' action committee could be vital in this activity.
What’s more, it will be in the interests of all Edinburgh residents to show solidarity with Edinburgh Council workers, as all of us are set to be affected by the privatizations and massive cuts the Council is planning – it’s really important all these struggles come together.

I have been more than conscious of the potential 'divide and conquer' strategy of Edinburgh Council management. Being a party to this could never ever be an option. All the proposals are totally unacceptable. 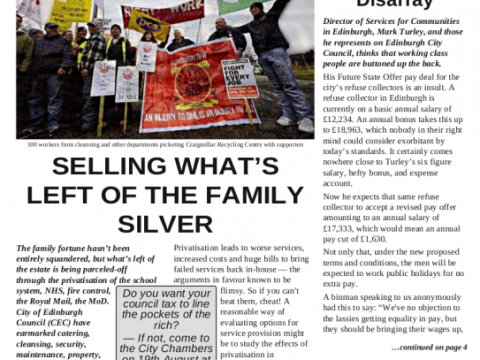 The Edinburgh Muckraker was produced by an independent group in solidarity with council workers, to inform the people of Edinburgh what is really… 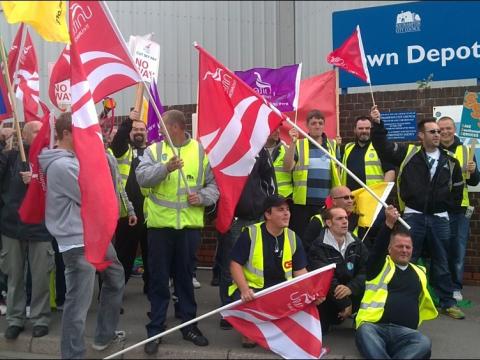 Public sector workers in Southampton are reaching the end of a week of strike action, organised in response to swingeing cuts and job losses… 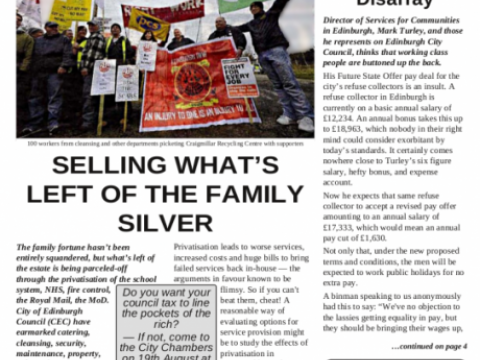 Online archive of the Edinburgh Muckraker, a bulletin initiated by anarchist supporters of, eventually victorious, striking refuse workers in…