'Europe' in Ukraine: many things to lots of people

Again, on the protests in Ukraine; this time mostly on the attitude towards 'Europe' among the several forces within the protests.

Again, there is mass protest in Ukraine. On Sunday, 8 December, hundreds of thousands have been gathering in Kiev, the capital. Demonstrators torn down a statue of Lenin, still seen as symbol of Russian domination. Opposition politicians are announcing that the protests will continue till government and president are gone. One opposition leader is giving president Yanukovych 48 hours to resign. Otherwise, his “residence will be blocked”. The demands of the rally, according to an English-language announcement : “Current Ukrainian President and government must resign”; new elections and the forming of a new government should follow; “Stop persecution of innocent people who participated in the peaceful protests”; freedom of assembly and of speech should be guaranteed; “Sign the Association Agreement with the European Union”. Yanukovych 's refusal to do so triggered the protests. What makes people so angry about this decision, and so insistently 'pro-European'?

For business circles and opposition politicians connected with these circles - main protagonists in the protests - there is class interest involved. These people see trade with European countries, export to European markets, as a profitable opportunity. The treaty – a free trade agreement – promises to get rid of taxes on Ukraine exports to EU countries. That means: better ability to compete. But taxes on EU exports to Ukraine will be skipped as well, though somewhat later. That means that highly profitable Western European companies can enter the Ukrainian market more easily, and push their Ukrainian competitors to the wall. Maybe Ukrainian businessmen see themselves as intermediaries between Western European and Ukrainian capital. Maybe, there is profit to be made for them. For countless Ukrainian workers, unemployment is threatening, as well as downward pressue on already low wages, in order to compete desperately against much more productive rivals. What is good for these kind of business people and the political opposition forces connected with them, may turn into a disaster for workers. Gas prices – currently based on concessionary rates granted by Russia – will rise to “full market prices”, which means: higher costs to heat houses, higher costs for Ukrainian companies. Another attack on living standards, another disadvantage to Ukrainian business as well, which they will translate in bankruptcies and/ of cost-cutting on the backs of their personnel. Applauding the EU treaty is applauding part of a neoliberal attack, to be ferociously opposed, not supported. Here, 'Europe' means misery, austerity, neoliberal agony. Broader EU-Ukrainian links – credits, to be connected to International Monetary Fund (IMF) conditions - point in the same direction.

For other, more openly right wing political forces driving the protests on, Europe means something else. These forces are strongly, sometimes extremely, nationalist. In Ukraine, this means: anti-Russian. Russia is, not unjustly in itself, seen as former imperial oppressor still trying to defend and regain the upper hand. Nationalists exploit the resentment amongst Ukrainians that this produces. But they translate this into hostility against all things and people Russian.This threatens not just 'Russian interests', but the rights of the large number of Ukrainian citizens whose first language is Russian. It ties Ukrainians to the state, and to their chauvinist politicians, under the cloak of the 'national interest', masking the fact that wage workers are getting 230 a month, while business people and politicians profit handsomely. For these nationalist – partly fascist – political forces. Europe, for them, is not so much a business partner or business opportunity; for these forces, Europe is a weapon against Russia. Faraway Brussels is seen as a useful counterforce against the hated Russian neighbour. Unfortunately, this has mass appeal. It is a variety of the ancient mechanism: the enemy of my enemy is my friend. But the EU enemy is not a friend of poor people in Ukraine.

Europe as business partner/ opportunity; Europe as counterbalance against the hated Russian enemy... these can explain the attitude of politicians and business people who see power to be gained and profits to be made. But to explain the size and fury of the crowds in Kiev, more is needed. People are outraged and furious, not just because of a trade deal gone wrong, not just because Yanukovych and Putin are too close. Yes, hostility against Russia plays a strong part in the protests. But most venom is directed against the Ukrainian power holders themseves, Yanukovych and his co-rulers. Last week 's police attack on demonstrators added to the fury. It adds to the feeling that the elite is corrupt, power-hungry and will defend itself with the most brutal means if it sees fit. Here, Europe is used as a democratic myth: it is felt to be everything that the Yanukovych regime is not. Closer ties to the EU are seen as a way to get rid of the criminal system over which the president presides.

An interesting piece – to which my attention was drawn in a comment on my earlier blogpiece – may serve as an example. “The agreement with EU for Ukraine it's a sign that criminal system will be destroyed”. That is the name of the article, and it deserves to be widely read. The piece paints a picture of the horrible conditions in Ukraine: wages of 320 euro, already mentioned; prices of milk , cheese, a dress, hiogher than in respectively Poland, France, Berlin; a police cprrupt police force in which rape goes unpunished; Yanukovych hiomimself, living in luxury. “Ukraine – it s not a country for him”, the article says about the president. “It is a business-project”. Read it, and one can understand why hundreds of thousands of people want to get rid of him.

But why see the EU as an ally? The article asks: “are you still thinking that oud demonstrations it thats why why we want to join into EU. No. We know perfectly well about all difficulties in your copuntries. We know perfectly how dicfficult for as will be euro integration. But agreement with EU for us is not a visa-free regime, not high salary, not good medicine. It 's sign that criminal system will be destroyed. It's the first of all – control of European politicians over the band in government”. Now, first, EU politicians treat this “band in government”not at all as leaders of a “criminal system”, but as potential trading partners and allies. The EU is not at all opposed to crimninals in government, it has cooperated quite nicely with Berlusconi who treated, first a foortball team, then a TV network, and then the whole of Italy as a “business-project”. Only when Berlusconi failed to enforce austerity, the EU objected. No, the EU is no ally against state criminality. Time and again, it is a partner in crime

And no, the EU countries are not that different from Ukraine in many respects. Take police violence. “Today in the morning the government using the power, for what every policemen in Eyrope already have set in prison, attacked, dispersed a demonstration.” Policemen attacking peaceful demonstrations can be seen in EU country after EU country. Last week, cops attacked and beat up students holding a peaceful sit-in in an university building in London, and followed this up with another attack on an protest outside. People got hurt, police arrested at least three people. A few weeks ago, police in The Hague, the Netherlands, attacked peaceful demonstrators holding a noise protest near the parliament building against a meeting of far right wing leader Wilders with Front National leader Le Pen. Police attacked, arrested three people and beat several of the others. I don not think any of the cops, in Londen or in The Hague, will go to prison for attacking peaceful demonstrators. I think the chance that they get a promotion is bigger. Yes, the scale is much smaller than in Ukraine. But that is a difference in degree. The whole idea that police forces in EU countries are inherently less violent than in Ukraine, and that authorities are inherently less inclined to use them against protest, is ludicrous.

That does not mean that the anger against the police and the authorities in Ukraine is less justified. It only means that is is a mistake to see the EU as an ally against repression and against the criminal system of which police violence is only a part. EU politicians express support for the protests, and criticize police attacks – hypocritically. But what closer ties with the EU is offering Ukraine is not democracy, freedom, justice. Closer EU-Ukraine ties mean turning Ukraine in a low wage appendage of the EU, as a source of cheap labour, to be exploited there or as migrant labour in Western European countries, just like Polish workers are exploited in countries like The Netherlands already.. In that transition toward Ukrtaine as a EU reservoir of exploitable cheap labour, opposition politicians are prepare to become accomplices, while fascists and nationalists are not above using 'Europe' to back up their anti-Russian chauvinism. But there musr be many among the demonstrators who are mainly angry about police oppression, corruption, atrocious living standards. For them, Europe is a myth. The sooner they discard the myth ans see the EU for what is really is – an enemy, not an ally in the struggle for freedom and justice – the better. The EU is, not unlike the Yanukovych regime, a “business-project” - on a vastly bigger scale. 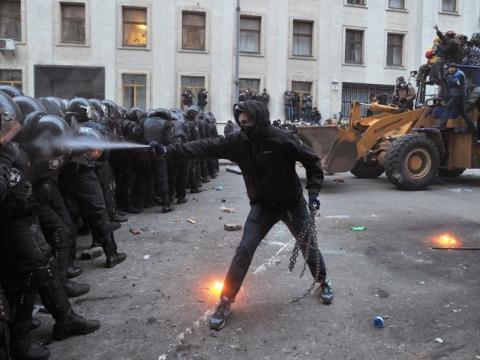 Ukraine: what's going on, and what does it mean?

Some thoughts on the protests happening in Ukraine. Things are not completely what they may seem.
Image 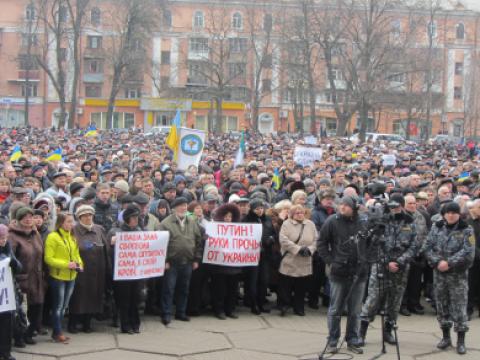 Ukrainians, Russians and Europeans were on the streets today protesting against the Putin regime’s…
Image 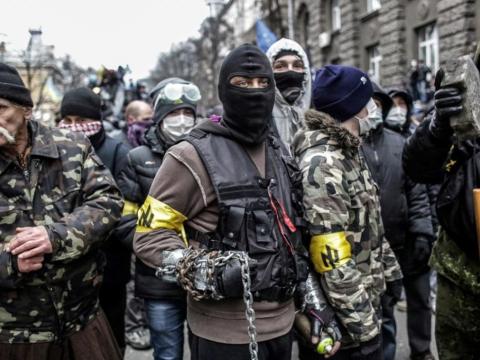 The crisis in Ukraine: a proletarian note - Hamid Moradei

As the crisis of the Ukrainian ruling class, split between East and West, escalates, it threatens…
Image 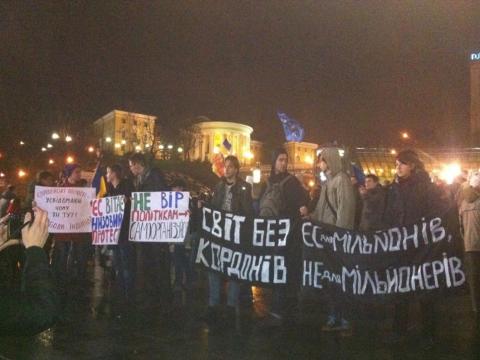 'Libertarian in spirit': the left and Maidan

Activists met in Kyiv to discuss the lessons of their participation in the Maidan movement. This report is by Kirill Buketov of the Global Labour…