The first worker-run products come off the production line

Production at the bankrupt Vio.Me building supplies firm has resumed under control of the workers.

After 3 days of intense mobilization, the factory of Vio.Me. started production under workers' control on 12 February. It is the first experiment in industrial self-management in crisis-stricken Greece, and the workers of Vio.Me. are confident this is going to be only the first in a series of such endeavors.

The mobilization kicked off with a big assembly of the workers and solidary organizations and individuals in a central downtown theater the previous Sunday. Here the course of action of the solidarity movement was discussed, and everyone had the chance to take the microphone and to express their opinion on the workers' struggle.

On Monday evening there was a march in the city center followed by a huge benefit concert with several well known folk bands and singers. Among them Thanassis Papakonstantinou, one of the most important contemporary Greek songwriters who is in a sense “part of the movement” since he always supports with word and deed the efforts of society for self-determination. The attendance exceeded everyone's expectations. Unfortunately about a thousand people didn't manage to get in, as the stadium was packed. The stellar moment of the night was when the workers took the microphone and explained their vision of another society, based on social justice, solidarity and self-management. Five thousand people were applauding, shouting and chanting songs of support.

Early next morning the mobilization went on with a vibrant march towards the factory. The workers were already in their positions and the production was triumphantly kick-started in front of the cameras of national, local and alternative media. The workers organized a guided tour of the factory and explained all the details of the production process to journalists and participants in the solidarity movement.

There is still a long road ahead: The costs of production are high, access to credit is impossible and getting a part of the market in times of recession is uncertain. The workers are however optimistic: The proceeds from the benefit gig and the donations of supportive groups and individuals collected through viome.org should be enough to keep the company afloat in the first few months. And the support of the social movements means many of the products will be distributed through the existing structures of social and solidary economy. The workers of Vio.Me. are already researching new cleaning products, based on non-toxic ecological ingredients, apt for home use. The factory makes quality building materials (mortars, plasters, tile adhesive paste and jointing materials, waterproof grouts, etc.) and the workers know very well how to improve the quality even more while lowering the production costs and hence the price. The challenge is now to find a market for these materials, either within Greece or in the surrounding Balkan countries. Some products can be shipped even further, so they could be distributed through the international solidarity movement as well.

The 40 workers of Vio.Me. and hundreds of participants in the solidarity movement have for three days lived an unforgettable experience, which however is only the start of a long and difficult road. Now more than ever we need to be united and strong, determined to build a new world based on solidarity, justice and self-management!

Slightly edited by libcom from http://www.viome.org/ 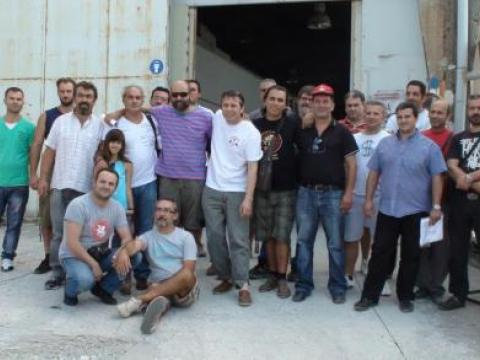 Health workers in Kilkis, Greece, have occupied their local hospital and have issued a statement saying it is now fully under workers control.
Image 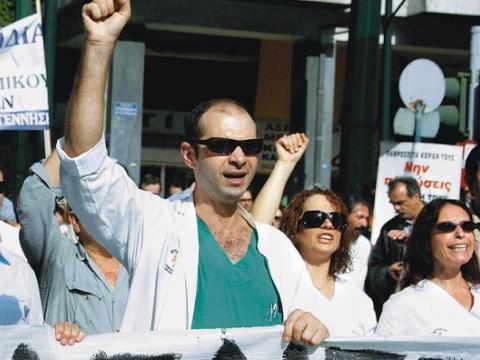