Given the vast scale, and dynamic importance to real-world affairs of that multi-faceted phenomenon of global solidarity loosely defined as the anti-capitalist movement, it is disappointing that feature film-makers (and more pertinently, their producers/financial backers) have blatantly ignored the rich narrative possibilities within it. Until now, that is.

There has been an encouraging upsurge in production and distribution of commendable left-leaning documentary films in recent years (the Corporation, the Take, Super Size Me, Control Room, the Yes Men among the best), but ironically this status-quo-critical material seems aided by businesses responsive to the hugely profitable success and notoriety of Michael Moore’s film-essays Bowling for Columbine and Fahrenheit 911. As Bill Hicks once angrily parodied marketing goon’s response to his acerbic stand-up: “ah, I see he’s going for the rebellious dollar, very smart, that’s a very profitable angle”.

But getting a system-questioning message heard is most important, and in these remains intact – despite a public lapping up anti-capitalist documentaries, this year’s release of writer-director Hans Weingartner's excellent The Educators heralds the first sensitive and intelligent fictional exploration of the ideas behind our movement’s passionate protagonists.

The main characters are three Berlin youths, frustrated by the inequalities and predatory destruction wrecked by global ‘free-market’ capitalism. Daniel Bruhl, star of last year’s touching Goodbye, Lenin!, gives another intelligent and absorbing performance as Jan, a spirited and subversive anarchist and revolutionary. Together with his friend Peter, ‘the Edukators’ conduct nocturnal Situationist direct-actions, breaking into ostentatious suburban mansions not to steal, but to rearrange furniture and valuables and leave cryptic messages designed to unsettle these wealthy oppressors of the proletariat.

What begins as well executed (if a tad ineffective) agitation soon leads to trouble when Jan falls in love with Peter's girlfriend Jule and a break-in turns into a sloppy and panicked kidnapping. All three have to flee from their cosy city commune to a remote hut in the mountains, where their savvy millionaire hostage Hardenberg antagonises their desperate situation further, putting their theories about anarchy and the system to the test before the trios seemingly inevitable self-implosion or capture by the state.

This tense, evocative and emotional thriller is also an excellent character piece, with all four discussing and reassessing ethics and politics in scenes most critics, predictably, dismissed as “overly preachy”, “intellectually confused” or even “hectoring socialist lecture”. But of course these bourgeois apologists refuse to see the point, and perfectly illustrate the film’s main strength as an affecting work of artistic power: why does anarchic idealism and honest talk of revolution make society uncomfortable? With "The Edukators," Weingartner successfully and sensitively dramatises questions that aren't supposed to be asked out loud in a turgid, apathetic culture where irony is king and belief in anything but money is dead. This dialectic sequence offers arguments from both sides, and forces viewers to get off the fucking fence.

The Edukators is now available from all ‘good’ capitalist DVD retailers.

From the pages of Working Class Resistance, magazine of Organise! www.organiseireland.org 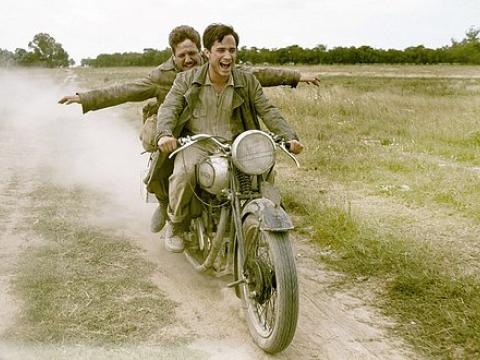