The 24 hour strike left many schools closed, hospitals providing a reduced service and newsagents without newspapers.

The BBC reported that the French capital's two airports and Marseille airport in the south suffered delays and cancellations.

And rail and bus workers are on their seventh day of an indefinite stoppage against planned pension cuts.

Half of the country's high-speed TGV trains were operating on Tuesday, while in Paris only one metro train in three was in service and less than half of buses were expected to run.

State rail operator SNCF, which is due to hold talks with transport unions on Wednesday, says the number of its workers on strike had fallen since last week.

But with traffic gridlock on the capital's roads on Tuesday morning, the stoppage still caused havoc for commuters.

Opinion polls suggest voters back the French leader's plans to reform "special" pensions which allow transport and utility workers to retire early, but a majority sympathises with civil servant grievances.

The education ministry said 40% of teachers had walked out but union officials said the figure was more like 60%.

Eight unions representing 5.2 million state employees - around a quarter of the entire workforce - say their spending power has fallen 6% since 2000, though the government disputes that figure.

Students are continuing to block access to campus buildings in half of the country's 85 universities.

They have been protesting since the start of November over plans to let faculties pursue non-government funding.

Prime Minister Francois Fillon said on Monday the government was ready to talk with unions but insisted it would not budge on plans to overhaul the French economy.

Meanwhile, the main daily newspapers were not available in shops as printing workers struck against planned job cuts. 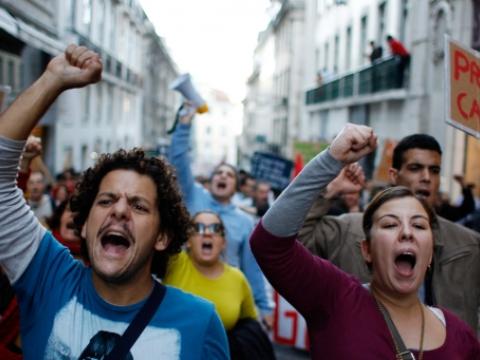