An interview with some early members of the Gay Liberation Front about what the potential for Gay Liberation, its challenges and its relations to the other struggles in America at the time.

Pat: The first question I would like to ask you to discuss is what is your concept of the
movement?

Bernard: Kay, the movement means something a little bit wider than you have expressed.
Movements have developed all over the world, and the movement has meant to me-I've
in the movement over 50 years-any attempt to change. Whether it be political change,
social change, or economic change. The movement, as I understand it, means that people
organize or even work privately and individually to make changes in the country.
Historically there are times when you work individually, and there have been times when
the movement catches up masses of people as it did in Russia before the revolution. Now
the movement includes people who want to make changes whether they be Panthers who
are changing the system for black people, or Woman's Liberation who are concerned with
changes for women, or socialists who are concerned with changes in the system. Or
whether it be an organization like the Gay Liberation Front concerned with fighting
against the oppression of homosexuals, but fighting within the framework of the wider
movement. These problems are not isolated, but within the context of the oppression of
the system against us all.

Bob: The movement today gets me a little up-tight. I find people saying I am the
movement. The movement can be 5 people who refuse to pay the subway fare. During
the Christmas week vigil there was a little old lady marching with me and she had on her
Dove button. She was terribly non-violent and marching for what she believed was right:
she wanted political prisoners freed. A cop hassled us and I was very angry. I called him
a pig. She said, "Let me do it." She was sort of a hooker type-sort of a tough old broad,
and she charmed him. She came back and said, "You have your way, and I have mine."
That's true. This woman is as much a part of the movement as I, even though we are
working in different ways.

Pat: I would like to ask you specifically-what ways have you found to get involved in the
movement?

Bernard: Well, my first activity was when I was 5 years old. My parents had organized
the first Student Friends of the Russian Revolution. I had a tray of little red flags and I
put them on people and got money from them. When I was about 13 lots of us were
arrested for picketing and handing out leaflets and demonstrating. We were helping the
workers who were locked out, we were protesting the war budgets, we were protesting
growing unemployment. At college, I helped organize the first NSL-The National
Student League-which is the granddaddy of all student organizations. Also the John Reed
Club. As time went on I got more and more involved but always from a political end
because I was convinced that nothing but a change in the system could change the
oppressions against blacks, against women, against children who were being unfairly
employed at the time. Also against homosexuals. Now I'm working with homosexuals in
the movement because I'm convinced that only in getting our rightful place in the
movement and demanding an end to our own oppression can we ever really make
changes for homosexuals.

Bob: I was instrumental in forming the 7 Arts chapters of CORE [Congress of Racial
Equality]. Most of my past work has been with non-whites. In this chapter we demanded
rights for Black people in show business. The first thing we did was break down the
industrial shows. No non-caucasian had ever been hired. We threw a picket line around
8th Ave. and 57th St. where most of the Auto show rooms are. We also got off to the
World's Fair-that was one of the times I was busted.

Kay: It seems that we had been arrested together. I was arrested at the World's Fair too.
Politics make strange cell mates. I think I got into the movement first as a Quaker. As a
Quaker I looked out my window in the West Village and noticed a lot of children
smashing things. I thought in a few years they'll be big enough to push the button and,
you know, somebody ought to do something now. I sort of got kidnapped by the children
and started a thing called Workshop of Children which I ran for three years. During this
time the civil rights thing was building up but since I was working with these children
who had a great deal of trouble with the law, I felt I couldn't be arrested. I thought they
couldn't distinguish between civil disobedience and crime exactly. However, as soon as
that thing folded I was delighted to go to jail at the CORE demonstration you referred to,
Bob.

Kay: I volunteered to be arrested and the Pinkerton men were so new and so non-violent
it was really difficult. I finally had to dance on the bar at the Schaffer Pavillion. Then I
worked with the Survivors of Nagasaski Hiroshima who were traveling around the world.
I worked with the people at New England Committee for Non-violent Action. We
participated in the blockade at the missile base of Lamakaza, in Canada, at the white
house, at prisons, and at submarine bases. And I went into the Peace Corps. I can't think
of any other exciting things to brag about.

Bob: I went south after the civil rights bill was signed. We went to a public swimming
pool in one demonstration. Myself, a very big black girl, and a black boy. We had a big
hassle getting in; but finally we demanded in, and we got in. We joined hands and
jumped into the water. There were about 50 people when we got there and in one or two
seconds there were three. . . .

Bernard: In the early days of demonstrations the thing we had to fear the most were the
mounted police. Most of us were under the hooves of police horses all the time. Young
children, men, women-even old people. What I found was that this kind of reaction to us
brought a stronger commitment from us. And also brought more and more people to the
movement. I wonder if the powers that be are aware that they build the movement
themselves with their actions.

Pat: It seems here as you talk about your own experiences and some of the thoughts and
feelings which have come to you from those experiences we're getting a fuller meaning of
the word oppression. So we might tie it up here by saying the movement is making
changes in the establishment where it oppresses us. Your experiences seem to have been
radicalizing. If you are in a situation where you see the extreme degrees of the
establishment oppression-you see the actual physical effects on people-you become
radicalized. Like you were saying, Bernard-about-

Bernard: -about the system being it's worst enemy.

Pat: I would like to ask you how you see the Gay Liberation Movement.
Bernard: I see the Gay Liberation Movement as a process which will help liberate gay
people by making them fully part of the whole liberation movement. The movement for
change in the system that will eventually annihilate any form of oppression. Before GLF
I was active in these movements, but anonymously-nobody was conscious of the fact that
I was homosexual. I think the only way we can gain respect for ourselves and any of the
help that we need from everyone else in overcoming our oppression is by showing that
we participate even though they don't understand why we participate. I think even among
a lot of our own people we have to fight for the right to participate as homosexuals.
Bob: I've always been active as a homosexual. Openly, but never publicly. In the past six
or seven months I have suddenly found myself living the life of a public homosexual. I
find resentment in many parts of the movement. When I find it, I confront it. This is very
healthy for me; and it's very healthy for the movement. We cant hold the movement up as
being any better or any worse than the rest of us. Gay Liberation to me is seeing 35 or 40
homosexuals marching as homosexuals in a vigil to free political prisoners. We have
been political prisoners, and we will be political prisoners. Homosexuals are beginning to
see themselves as an oppressed minority. I don't think homosexuality is a magic tie that
binds us all but in a sense there is something. It's being proud of ourselves. And I think
that's what liberation will help us find-a pride that we can just stand up and be proud of
ourselves as human beings.

Bernard: I want to bring up the past in one way. When I was among young people, we
had no way of expressing this. I never felt sick, although the attitude then was that we
were a sickness. I could only fight this when I talked to individuals. We had no public
way of fighting it. And it's exciting to be able to do it now, and the fight must be a very
conscious fight.

Bob: Kay, do you have anything to say. Say something, we'll have Women's Liberation
after us if you don't.

Kay: I'm very new in GLF and I don't have a great deal to say to people who want to
know what it is. I see half of the gay liberation as a sort of attempt to try to change other
people outside of ourselves-to try to make them stop oppressing us. But the half that
interests me most now, at the beginning of my gay liberation, is self liberation. I was
never open or public. I always felt that I had to be a secret homosexual, and I was
terrified. Indeed I am now. This article is the first time I have ever come out in a public
way, and I find that a great deal of the oppression is built into myself-is built into us. So I
still expect when I come out, people are going to dislike me because I am homosexual.
People do dislike homosexuals. On the other hand, I myself have disliked my own
homosexuality, so perhaps it's not going to be as bad as I thought.

Bernard: Although I haven't been a public homosexual, among my friends, it was always
known. What interests me now is that, although I was completely loved, for me, being a
homosexual, I find that now that I'm getting active in GLF there's a resentment. People
wonder why I have to work as a homosexual in the movement. Why I can't take it up
wherever I am in the movement. I don't think you can take it up wherever you are in the
movement. It's only possible when we are working as a homosexual to take it up. I think
that we should-those of us who can-be public as well as open. 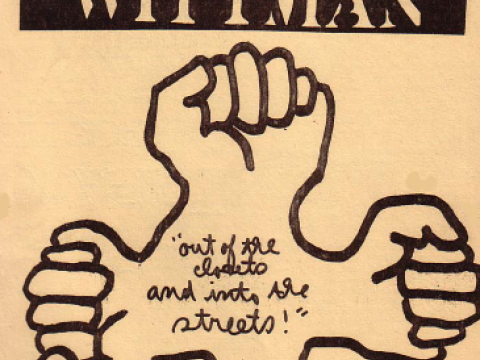 A radical manifesto for gay liberation published by the Marxist cell of the US Gay Liberation Front in 1970.
Image 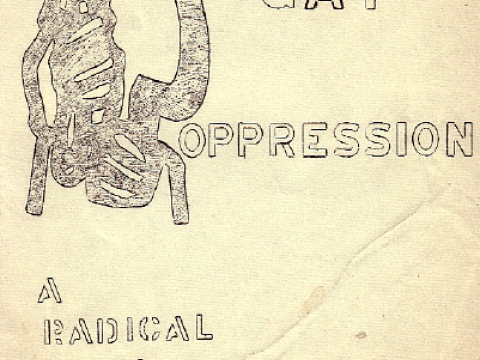 A Marxist analysis of discrimination experienced by LGB people, published by a section of the Gay…
Image 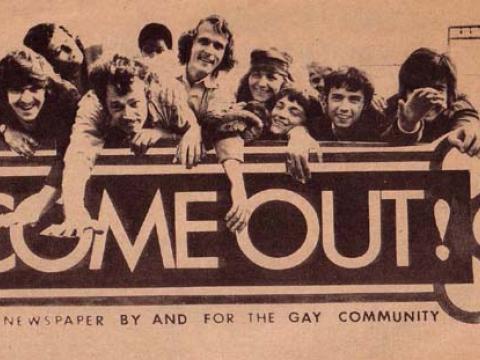 Come Out! was the first periodical published by the gay and lesbian community after the Stonewall riots in June, 1969. The Gay Liberation Front, one of the first militant activist gay rights…
Image 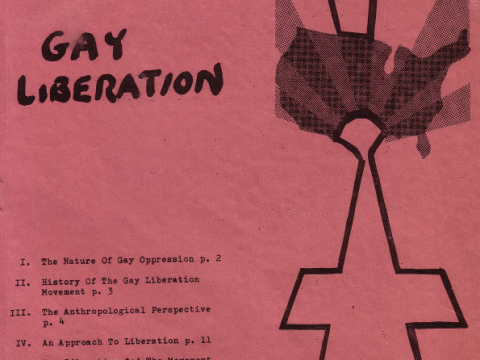