Historical information about and images from the occupation of Hayes Cottage hospital by its workers, who took over the establishment and ran it collectively when it was faced with closure in 1983.

The local health authority was proposing to close Hayes Cottage Hospital on 31 October, 1983.

On the evening of Tuesday 25 October, the workers collectively decided to occupy and run the hospital themselves to try to keep it open.

The workers were mostly members of the COHSE and NUPE health unions, which later merged with others to form Unison.

The occupation and work-in lasted until December, when the health authority backed down and agreed to keep the hospital open.

It remained open until the early 1990s, when it was converted into a nursing home.

The Northwood and Pinner district hospital, which was also scheduled for closure, was occupied by its workers the following day, and its closure was also prevented.

Here is a leaflet from the time produced by Hillingdon Health Emergency, a campaign group funded by the Greater London Authority (GLA):

Hayes Cottage Hospital will be open this Christmas, and every other Christmas

On the evening of Tuesday 25th October 1983 the staff at Hayes Cottage Hospital occupied in a bid to keep the hospital open. This action was taken after a lot of thought but it was clearly the only way to stop the closure after other avenues had been exhausted.

The reaction of the people of Hayes has been really magnificent. We have had visitors coming round with food, supplies and money. Messages of support have been flooding in from all over London while a delegation from Charing Cross Hospital came over to see us. Ken Livingstone sent a message of congratulations saying 'This will be an example to other parts of the London Health Service faced with cuts in vital jobs and services. Best wishes for the struggle ahead.'

The best bit of news recently has been that the G.P's connected with the hospital are to start admitting patients again so we will be running just as before. Certainly, the patients in the Cottage Hospital are solidly behind the "work-in. Fifteen of them have signed a petition demanding the retention of the hospital and one patient has insisted that if any attempt is made to move her she intends to die in the ambulance......

Our aim in this struggle is to force the District Health Authority to take their proposals for cuts out to full public consultation. We believe that the people of Hillingdon have a right to a say in the sort of Health Service that is provided instead of a totally undemocratic and unaccountable group of individuals dictating from on high.

We believe that we are going to win the battle for Hayes Cottage Hospital but to do so we need the help of the ordinary people of Hayes.

WE NEED MORE PEOPLE TO GUARD THE GATES, DAY AND NIGHT.

We also need letters going to the DHA demanding that no violence will be used and that patients will not be forcibly removed against their will. This is a real possibility and it must not be allowed.

Hayes Cottage Hospital is an integral part of the community in this area. It provides a type and a quality of care that is not available at a big unit like Hillingdon. Closing our hospital will mean that many old people and parents will have long journeys if they need medical treatment. These cuts are going to hit most those people that need the IMHS while the people with the money will have their own private care. THIS MUST NOT BE ALLOLWED. The NHS was set up through the struggle and toil of our older folk and we pay for it through our taxes. In any civilised society decent health care should be a right not left to charity.

HELP US DEFEND THE HEALTH SERVICE. HELP US SAVE HAYES COTTAGE HOSPITAL.

The Hillingdon Health Emergency Campaign had a spontaneous beginning. Members of the public had attended a meeting of the Regional Health Authority on 27th September 1983. At that meeting, the proposed cuts in Health spending ware announced - including the proposed closure of the two Cottage Hospitals Hayes and Northwood and Pinner.

There were immediate protests from the public gallery and four people were ejected from the meeting. Later an impromptu meeting of the protesters took place in the Civic Centre electing a committee which immediately went into action to arouse public opinion and protest against the cuts.

Leaflets were produced; public meetings held; petition forms distributed, resulting in thousands of signatures. Letters were written to the press, M.P.'s, Councillors and other public figures inviting their support.

Trade union branches were heavily involved and asked to support, both financially and physically. To date, nearly £1000 has been raised. The support received from the public has given a great boost to the campaign, which stepped up its supporting activity following the decision by the Staff to occupy the two threatened hospitals.

It is the policy of the Committee that the campaign against Health service cuts will continue, whatever the outcome at Hayes and Northwood. They therefore continue to ask for public support and feel sure that it will be forthcoming.

And here are some photos of the occupation and some of its leaflets: Hospital workers outside the occupation Information and images taken with thanks from Hayes People's History 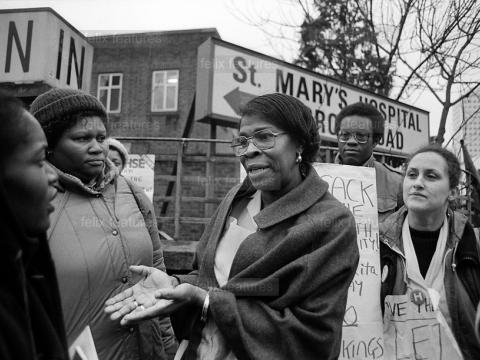 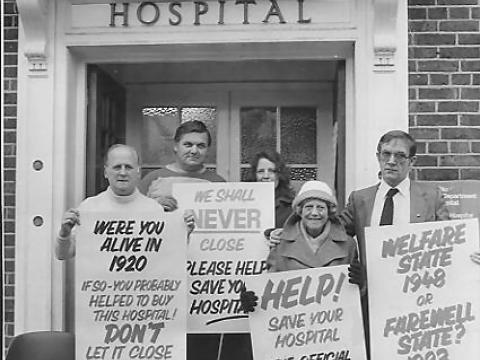 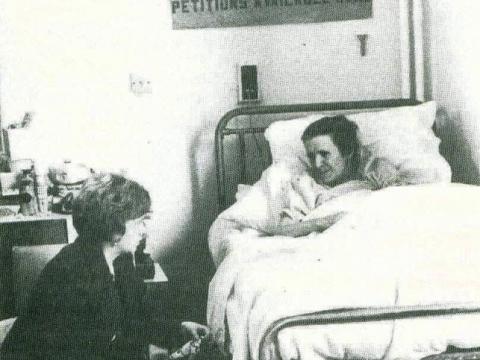 Occupy and win: a manual for fighting hospital closures 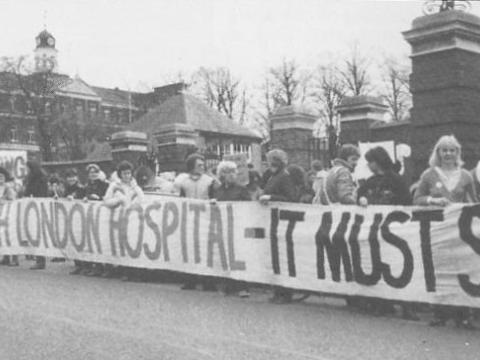