Philippe's got his own way of saying things, but he has a point about the real consequences of fake news... https://t.co/a02sXiaHfp— Hillary Clinton (@HillaryClinton) February 14, 2017

Never one to forget a slight, Clinton’s tweet was a reference to a tweet made last December by Flynn’s son, Michael Flynn Jr., who helped spread a now infamous conspiracy theory surrounding supposed Clinton involvement in a child sex trafficking ring at DC restaurant Comet Ping Pong. The “Pizza-Gate” conspiracy theory is probably the most well-known example of what is known as “fake news”; predominantly right-wing conspiracy theories spread not only by U.S. trolls but also supposedly by the Russian government.

Clinton’s obsession with “fake news” ties in to the attempt by the Hillary wing of the Democratic Party to shift blame away from their gross incompetency and onto supposed Russian meddling in the U.S. elections. Not only does this help them maintain dominance over the Party, but it also helps stir up popular sentiment for the resumption of an aggressive posture towards Russia that began in the later years of the Bill Clinton administration.

What seems to be lost on Clinton, and the media who report on this issue, is Clinton’s own responsibility for helping to create one of the most insidious examples of fake news in recent memory.

Few remember it now, but the 2008 Democratic primary battle was much more vicious than the relatively collegiate Sanders-Clinton rivalry. Similar to the 2016 primaries, Clinton went into the campaign for the 2007 Iowa caucus as the assumed Democratic nominee, and was less than pleased when dark horse candidate Barack Obama started to gain traction with both voters and the private sector. After it started to look like Clinton might actually lose the Iowa caucus, a Clinton county volunteer coordinator spread an email accusing Obama of being a Muslim influenced by Wahhabism, intent on destroying America. Though the staffer was quickly dismissed by the Clinton campaign, the idea that Obama was a Muslim spread as the campaign continued. Months after the Iowa incident, Obama and Clinton met on the tarmac of Washington National Airport where Obama expressed his anger at Clinton for what had transpired in Iowa, and the rumors that the Clinton campaign was still spreading these lies. In response, Clinton “exploded”, obviously enraged that she was being talked to so bluntly by someone who was a comparative nobody just months ago.

Subsequently, after losing a series of hard fought primary battles to Obama, the Clinton campaign became increasingly agitated and desperate. It was at this point that in addition to running attack ads, the Clinton campaign circulated a 2006 photo of then Senator Obama dressed in a turban on an official visit to Somalia. The photo (which initially appeared in a May, 2007 issue of the London tabloid The Globe, and was at the time assumed to have been photoshopped) was intended to play upon rumors that Obama was a Muslim and had once studied at a madrassa.

With the photo leaked, the Obama campaign was predictably incensed. In turn, the Clinton campaign responded by trolling, with Clinton campaign manager Maggie Williams declaring, “If Barack Obama's campaign wants to suggest that a photo of him wearing traditional Somali clothing is divisive, they should be ashamed…Hillary Clinton has worn the traditional clothing of countries she has visited and had those photos published widely." A few days later, Clinton was asked by a CBS interviewer whether she really thought Obama was Muslim, to which she evasively responded, “there is no basis for that. I take him on the basis of what he says…There is nothing to base that on, as far as I know.”
[youtube]liDUp5rCqLY[/youtube]
In the end, the whole episode ended up backfiring on Clinton, with voters finding the attacks to be distasteful. But the photo’s legacy lives on, and was undoubtedly instrumental in the rise of “birthers”, people who believe that Barack Obama is a Muslim who was born in Kenya, a sentiment that is still widely held among the American right wing.

In the wake of her 2016 defeat, Clinton called for both the public and private sector to begin censoring “fake news”, to stop its viral spread. Ever subservient to the powerful, the media failed to acknowledge the irony of Clinton’s statements.

It is particularly interesting to see how the left-leaning, identity politics focused website Jezebel has dealt with this deplorable episode. Despite discussing Hillary Clinton and her positions on issues related to privilege politics in countless pro-Hillary articles, a search of Jezebel reveals a meager one paragraph on the circulation of the photo. Buried in a Gawker yearend review of 2008 listicle linked to on the Jezebel website, writer Pareene merely writes that the photo “mysteriously” spread, and that one “crazy” story even says that the Clinton campaign was responsible, but, “Who knows! Who cares!” Far from being "crazy", there is really no dispute that it was in fact Clinton staffers who leaked the photo. It seems that despite the story being precisely the kind of issue usually discussed at great length by Jezebel, the incident has been blocked from official memory because of who the culprit was, considered too politically distasteful for the Gawker offshoot to discuss.

One can only imagine what would have occurred one year ago, were “fake news” a part of the popular lexicon. Sanders supporters would have been treated much more dismissively for alleging that the Democratic National Committee (DNC) was somehow conspiring to sabotage his campaign. In the end of course, it turned out to be true, the DNC was at the highest levels quite literally conspiring to sabotage the Sanders campaign, to an extent that may never be fully known.

Not only do Clinton’s complaints about “fake news” ring with hypocrisy, but they also show the subservience of center-left outlets such as Jezebel, outlets normally highly concerned with matters related to identity politics, who refuse to attack Clinton for her past actions. In reality, the definition of “fake news” is much more complicated than what Clinton and the media would like us to believe.

If Barack Obama's campaign wants to suggest that a photo of him wearing traditional Somali clothing is divisive, they should be ashamed…Hillary Clinton has worn the traditional clothing of countries she has visited and had those photos published widely 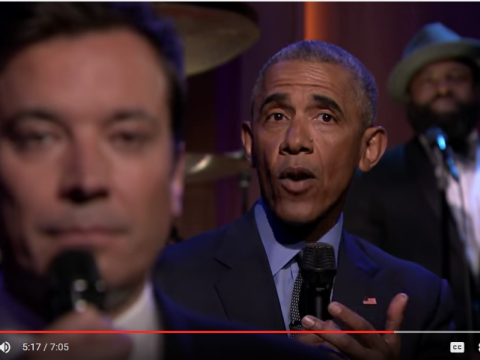 So this is how it ends: Obama spends his last months in office shilling for the TPP

The “hope and change” candidate will go out with a whimper. After nearly eight years of consistent…