A brief look at informal work groups, which the author sees "as the seeds, and the tiny cells within a larger muscle of organization."

In every workplace throughout all of history, workers have come together and worked together for their common interests. This takes many forms. Sometimes its at the level of two workers next to each other in cubicles who support each other and make work less miserable by being able to laugh with one another; other times it forms into a group that encompasses enough people that they can informally control the speed of production and the work conditions that surround them; and sometimes it grows into a union a group of workers within a shop, ideally across and industry who can directly exercise power in relation to the boss. In whichever form it takes it is significant. In each form it challenges the isolation that exists in other aspects of our lives as workers. In these relationships we begin to see the possibilities of what it means to take collective action and what it means to control the means of production. We are empowered by these relationships, and where we can build on them we can have success and begin to make changes.

These bonds we form with our fellow workers are the basis of our organization, the basis of Industrial Unionism and the basis of a working class movement. Where these bonds originate and where they are most intense is in our workplaces, where they come out of our day-to-day interactions and struggles.

The first two forms mentioned are incomplete. Little can be done if our work group remains isolated in a group of two or three; and if we begin to informally control production we still may be isolated within a larger company or industry. These have to be expanded through organization. But look at these small groups as the seeds, and the tiny cells within a larger muscle of organization (a muscle that must be constantly exercised).

Through organization these small work groups branch out, around an issue or as part of a campaign. They encompass other workers, get further defined through this organization, and identify workplace or industrial issues to struggle against. Again this often happens informally and we should not overlook it or believe that workers are not capable of acting outside of formal organization. Small informal actions are happening all over the place, and even in this context workers begin to see their power, but in small ways. It has to grow and it has to become formal in order to grow to a position of strength and push forward demands.

As the struggle grows it becomes more formal, the definition it gets is one of class. It moves from a group of friends or acquaintances that want to make things better on the job, to a group of workers making a demand on the boss and having an action to follow this demand up. In this action we must come together and confront things directly ourselves. This means not relying on a third party, on the government, a lawyer, or the press to enforce our demands, but doing it ourselves, with other workers inside our workplace and outside of it. This is direct action and is present in informal struggle and in formal struggle.

In this struggle we as a group are defined by our relationship to the boss and to production, in a way that is not possible when we act as individuals. This is when we become the working class, a group acting in its own interests.

We all identify ourselves as part of this group, the issue we have been organizing around now becomes one of the working class verse the employing class. And though these actions we begin to see what is possible, not just for ourselves and our families but also for our fellow workers, for our organization and for our union. Out of these small seeds, informal work groups, organization, direct action, our class is defined. We cease to be individuals, left to the whims of the bosses and become a force that can push our own issues and agenda. 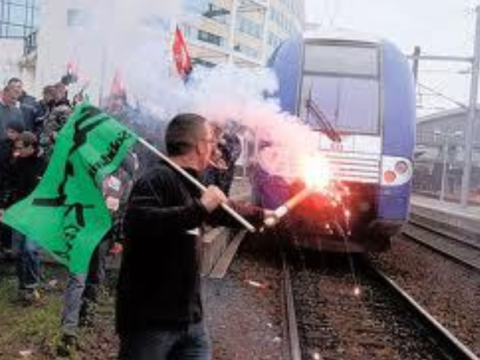 Flying squad pickets and the need for independent workplace groups

The second part of an interview with Neil Rothnie about North Sea oil workers’organisation.

Precarious and pissed off: Lessons from the Montpelier Downtown Workers' Union, 2003-2005