‘It is time for rage’: A statement from left-wing collective Ta’amim al-Masaref in Lebanon

A statement from the Ta’amim al-Masaref [Nationalisation of the banks] collective in Lebanon, where the explosion in Beirut has led to a renewed uprising against the state. This statement previously appeared on the website of the Alliance of Middle Eastern and North African Socialists.

Comrades, we are trapped.

We are trapped between the barbarism of capital accumulation and the subsequent nonchalant greed it enables.

As our lives become more worthless by the hour, we are trapped between the military machine deployed to defend private property at all costs, and the ruling class it has vowed to uphold.

We are trapped between the death cult that is capital accumulation and its tendency to accumulate, store, bargain for better deals, negotiate and accumulate further, even at its own risk. Especially at our expense.

The August 4 blast is an immediate and irreversible ramification of the ruling class’ deliberate indispensability of the masses. The capitalist, neoliberal system was built at our expense, and always – without exception – seeks to serve the interests of the ruling class. It will never be more evident and salient than it is today the extent to which our lives are regarded as expendable and worthless.

But the blast does not propagate evenly. It rips apart working-class neighbourhoods relentless and with impunity. Wave after wave, we can feel our precarity laid bare as our windows and doors shattered, and our buildings collapsed. The explosion both accelerates our condition and decelerates business as usual. It is in this spatio-temporal reality that we are trapped.

Our livelihoods are closest to the epicentres of destruction. How could they not be, when our livelihoods depend on reproducing chaos, zombie capitalism, and our destitute condition? It slows uncovers their violence and their gentrifying displacement. As their interminable towers merely tremble, their children are kept safe by our comrades, domestic workers.

This regime functions precisely as it was constructed to: to exploit us, displace us, crush us and kill us, unapologetically and without hesitation.

They are untouchable even in defeat. They are indestructible even in catastrophe

But they are unreachable no more.

As thousands of families remain stranded and homeless, it is now our duty to occupy their luxurious homes. The ones purposefully kept empty as a form of class war, as an undying bourgeois sneer. We must occupy what they think is theirs. We must occupy what is, in fact, ours.

As this catastrophe steadily becomes militarized, it is our duty to fight against the unfolding military coup that is going to be perpetually imposed on us.

As we are living through famine, hunger, and poverty, it is our duty to supply for our comrades. To fight for food sovereignty. To divorce dependency from our bellies.

We must demand justice for our dead. For our victims.

We do not need any investigations. We know who the culprits are. Structurally, yes it is the ruling class, its third-party tradesmen, middle-men, technicians of doom, and trades of destruction.

We must form neighbourhood committees, and workers must control their own destiny, both in the production and reproduction of wealth. We must rebuild our own homes. We must share them with our comrades.

We must open public schools. Transform them into temporary hospitals for the wounded.

We must honour our dead. Celebrate their lives. Continue their fight.

We must not let them force us into normalisation. Nothing that we have lived through in our lifetimes, and in the last year, has been ‘normal’.

As we look at Palestine and Syria, we know that our struggles are intertwined, as are our regimes. Millions of Syrians, Palestinians, Sudanese, Algerians and Arabs have fought their regimes in an open war of manoeuvre that has not said its last word. We are nothing if not a continuation of this war.

We must gather the strength to emulate our comrades in 1982 who fought against the Israel onslaught of Beirut. We will fight capitalism at home as we have previously fought imperialism.

We must be inspired by our Syrian comrades who have lived through thousands of the regime’s barrel bombs and Islamist occupation.

Comrades, the time has come for us to organise and obliterate capitalism and its enablers.

And with that, death to the system that kills our comrades.

This statement does not necessarily reflect the views of the Alliance of MENA Socialists.

As we look at Palestine and Syria, we know that our struggles are intertwined, as are our regimes. Millions of Syrians, Palestinians, Sudanese, Algerians and Arabs have fought their regimes in an open war of manoeuvre that has not said its last word. We are nothing if not a continuation of this war. 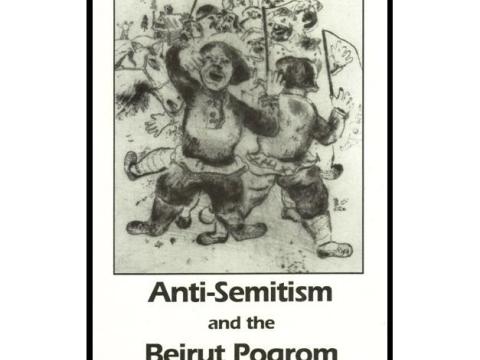 Drawing on his personal experiences and family history, Perlman dissects the disturbing irony in the use of the Holocaust as justification for…

In 2004 a general strike was called in the Lebanon against rocketing prices and poor social provision. During demonstrations the army opened fire killing five.
Image 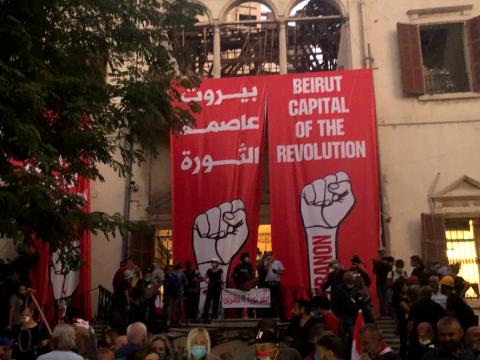 The Lebanon Disaster: A Metaphor for Modern Capitalism

There is now “a state of emergency” in Beirut. No, not to deal with the devastating explosion in its…