This study deals with left-wing splinter parties which were in existence in Germany between 1918 and 1933. In 1918, the Second Empire collapsed, the Kaiser abdicated, and the imperial government resigned. Only the socialists were relatively strong enough and, in the eyes of the public and the victorious Allies, unblemished enough to take command of the state. At this historical moment, however, the socialists were divided. The chance to install socialism in Germany was lost due to the bitter fighting among the three principal left-wing parties. The divisions in the socialist camp, which had started earlier, but which broke into open warfare at the end of the Great War, were intensified by the crisis the Weimar Republic faced and led to a great number of splinter parties.

Chapter One provides the background. It concentrates on some of the problems that the SPD and the KPD before Hitler's take-over.

Chapter Two discusses the emergence of splinter groups. It traces each splinter group from its orgin inside a larger party, its evolution and its decline.

The Third Chapter examines the programs,platforms and ideologies of the splinter parties. It concentrates on their political and economic demands. It also deals with their views on fascism and the methods they adopted to cope with the menace presented by the rise of Hitler's NSDAP.

The Conclusion assesses the reasons for the failure of the splinter parties. Splinter parties were both, symptoms and victims of the turbulent times if the Weimar Republic. They were not the cause of Hitler's victory. Their importance lies not in the impact they had on Weimar, but in what they show about Weimar Germany. They reflected in a microscopic way the insecurity, the mistrust, the social decay, the social and political mobility and unrest, the countless crises and the blind and desperate search for something better.

interesting, never heard about this study before, ... strangely, he treats the rightwing breakaway group from the SPD, the ASPD, which both contemporary observers and scholars consider to be at least partly as voelkisch

p.s.: up to date bibliographies on the respective groups can be found in the articles on these groups on de.wikipedia.org

have now read it, the study is good, where it is relaying on the scholarly studies produced during the 1960ies under the supervision of Wolfgang Abendroth (Drechsler on the SAPD, Bock on FAUD/KAPD/AAUD/AAUE 1918-23, Tjaden on the KPO and Ihlau on the Rote Kaempfer), there is very little on the post-1923 KAPD/AAUD/AAUE, the stuff on the post-1924 leftwing splits of the KPD is very short and unreliable, he also leaves out the ORG/Neu Beginnen group ... problematically is, that he includes the rightwing ASPD which was explicitly non- and anti-marxists but excludes the FAUD and the neo-kantian ISK for being not marxist, both showing many similarities with the other marxist groups in the study

The councilist movement in Germany (1914-1935): A history of the AAUD-E tendency 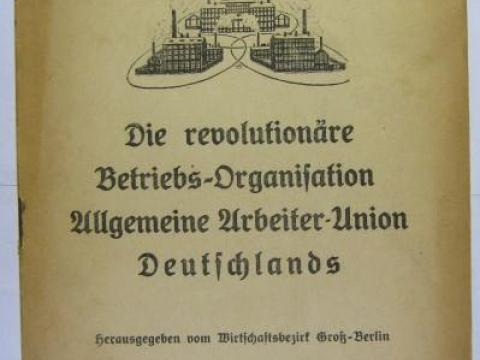 The KAPD and the proletarian movement – Jacques Camatte

A 1971 essay on the KAPD, its positive features (its break with the ideology and practice of social…