In direct oppostion to what Marx advocated, the Bolsheviks tried to institute socialism without democracy. The damage to the socialist movement resulting from this was immense.

Some sixty-one years separates us from the October Revolution of 1917 when the Bolsheviks under the leadership of Vladimir Lenin made their successful bid for power. Since that time the debate has never ceased in defence of or criticism of the takeover, but there is little attempt by socialists to give a Marxist theoretical criticism of the revolution. The early publication of the ill-fated Julius Martov's State and the Socialist Revolution, a reply to Lenin's State and Revolution, is still perhaps the best exert example of a socialist critique of Leninism. In short it shows that the socialism of Lenin was a facade and that not only a gulf, but a veritable ocean separates Lenin and his followers from Marx and his co-worker Engels.

There are a number of opposing ways in which most view the rise of Leninism. On the one hand we have those, such as the anarchists, who assert that Leninism and the managerial bureaucracy of a state capitalist Soviet Union is the natural development of Marxism. Others develop this theme in the defense of the revolution by claiming that Leninism was indeed a “higher” development of Marxism in the "age of imperialism" (usually asserted by most Leninists). Both views carry the single thread that Marxism was inevitably tied to Leninism — a belief which has become widely accepted simply because of force of habit. But, as Maxim Gorky forewarned: "A belief based on force of habit is one of the saddest and most harmful phenomena of our time — as in the shade of a stone wall everything new grows slowly, become stunted, lacking the sap of life." (My Apprenticeship).

What must be done amongst serious socialists is to review the main tenets of Leninist theory and compare them with the socialism of Marx. Such a review must not be constructed as a call for return to purist dogma but for a thorough understanding of Marx's views on the socialist movement. As such it provides a damaging critique of today's Leninist movements — a critique they cannot face.

One of the main issues of contention centres around the very role played by the socialist movement/party. To Marx, the socialist revolution could only be achieved by the "self-conscious, independent movement of the immense majority in the interests of the immerse majority." (Communist Manifesto). Communists/socialists did not pose as a separate party opposed to the interests of the other working class organizations and did not proclaim themselves to be its official leadership. The movement would grow out of the understanding the working class gained of the class positions they held. Objective class interests would be formed paralleled by the growth in subjective consciousness — a class consciousness. In the struggle against capital the workers, aware of their class situation through their real life experiences would become a "class for itself" (German Ideology) and it would be their "mass instinct" (Engels to Friedrich Sorge, 1894) which would show them that they must build their own party. As such, "so that the masses may understand what is to be done. Long and persistent work is required." (Class Struggle in France).

What many socialists and anarchists have failed to understand is that the critical element of class consciousness amongst the working class must be established for the revolution to be successful. When dealing with events of the Russian revolution, the Spanish civil war or the May uprisings in France 1968, many fail to note that what is lacking is a clear socialist consciousness/class consciousness — of the working class aware of itself as a class, aware of its immediate interest and its historic neccessity to establish socialism. Such consciousness entails a belief in what socialism is and how to achieve it — call socialism the abolition of wage labour, a classless society, ending of alienation and the society of the spectacle, or the radical transformation of everyday life. Socialists were, in Marx's view, the advanced sections of the working class. They did not lead the revolution but pushed all other sections of the proletariat forward and revealed the general movement of society and the social forces in conflict.

Lenin had, as early as 1902, rejected this belief when in his famous What is to be Done? he advocated the need for a secret party of "professional revolutionaries" since "the working class exclusively by its own efforts is able to develop only trade union consciousness." The minority elite of revolutionaries was to lead the workers and it was the party alone which could establish and exercise the "dictatorship of the proletariat" in the so-called "interests" of the mass. As Lenin proclaimed at the 10th Party Congress, only the communist party "is in a position to unite, educate, organize ... and direct all sides of the proletarian masses and hence all working masses.'

Marx continually stressed in his own writings and through his work in the International Workingmen's Association that the proletariat, by its own efforts would seize state power by itself and in its own interests. The revolution could not be willed by a few individuals as Michael Bakunin believed and cannot be led by a Blanquist elite. Lenin on the other hand, did not understand the prerequisite of a class conscious majority. As reported by John Reed, Lenin had stated: "If socialism can only be realized when the intellectual development of all people permits it, then we shall not see socialism for at least five hundred years." Only after the Bolshevik power was deeply entrenched and a new managerial bureaucracy was being built did Lenin concede that certain "cultural" work must be done. Not realizing that socialism cannot be built without socialists the Bolsheviks and their followers may well have put the socialist movement back some five hundred years.

But perhaps the most controversial aspect of Marx's thought centres around the term"dictatorship of the proletariat", taken by both anarchists and Leninists alike to mean the iron-willed dictatorship of a small clique or party of those "educated" in socialist dogma. Yet never did Marx or Engels look upon this dictatorship as a form of state or government, but rather as the social structure of state power in the immediate transition to socialism. As early as 1848 in the Communist Manifesto Marx concluded that very first step in the revolution was to raise the proletariat to the position of the ruling class — the "establishment of democracy".

The proletariat, being the immense majority, would seize the state power and machine" (Eighteenth Brumaire). The state machine did not mean a state itself but the "Bureaucratic and military machine" (Marx to Kugelman). While in previous revolutions the bureaucracy and military would simply be handed over to the new regime, it was the duty of the working class to cast them aside and dismantle them "at the earliest possible moment". (Civil War in France) . As the young Marx had commented in the Critique of Hegel 's Philosophy of the State, the bureaucracy caused the state to seemingly stand above society while in reality it was the "imaginary state behind the state" and thus possessed the very "essence" of the state.

The working class, in Marx's construct, seizes state power and lops off its worst sides. Through this "dictatorship" of the majority workers use the organized force they wield to abolish the capitalists as a class and thereby negating themselves as a separate class (for without a capitalist class there can be no working class). As the class system is abolished and classes cease to exist there is no need for a state as an instrument of class oppression and its vestiges will die leaving an administration controlled by the people themselves.

Lenin showed a serious misunderstanding of this. In the State and Revolution he assumed that the state itself would be "smashed". This left him open to charges, by social democrats, that his "anarchist tendencies had come forth, but Lenin proposed to smash the state only to replace it with a centralized "workers' state". The dictatorship, rather than giving free reign for all tendencies to appear through the establishment of the fullest democracy as advocated by Marx in regards to the Paris Commune, would suppress all oppositional faces. Furthermore this dictatorship would establish "socialism" and then lead to the development of "communism" despite the fact that neither Marx nor Engels ever made such a distinction but only commented on the lower and higher phases of communist society. That Lenin's vision was truly distorted is confirmed by his definition of socialism: "Socialism is nothing but state capitalist monopoly made to benefit the whole people." (The Threatening Catastrophe and How to Fight It). In a short time the dictatorship exercised by the party would proceed with this socialism despite the workers. At the 10th Party Congress Leon Trotsky put it this way: "The Party is obliged to maintain the dictatorship ... regardless of temporary vacillations even in the working class ... The dictatorship does not base itself at every given moment on the formal principle of a workers' democracy." And as the guns of the Bolsheviks thundered at Kronstadt where workers and sailors demanded elementary democracy Lenin put forward the view that "Soviet Socialist Democracy is in no way inconsistent with the rule and dictatorship of one person (10th Party Congress.What a charade of Marxism!

Much of Lenin's thought proceeds from the proposition that socialism is a distinct developmental stage apart from communist society and that the state must be smashed only to be replaced by a new form. In that instance "All citizens are transformed into hired employees of the state, which consists of armed workers." (State and Revolution). The state thus becomes the absolute capitalist. In Anti-Duhring, Engels made it clear that the proletariat seizes political power and turns the means of production into state property. But, in doing this, it abolishes itself as proletariat, abolishes all class distinctions and class antagonisms, abolishes the state as state." And as Paul Lafargue noted in his reminiscences of Marx, Marx himself promoted the triumph of the working class which would "establish communism as soon as it has achieved political and economic leadership of society."

It is undeniable that the Bolsheviks during the course of the revolution in Russia had a large following in certain urban centres, but one must, nevertheless, understand the objective circumstances of the time. The Provisional government was weak and corrupt, the Russian army lay in defeat, communication was in chaos, millions starved. The Bolsheviks promised "Peace. Bread and Land", a strong central government and the convening of a constituent assembly. Such promises appealed to certain sectors of the population and the Bolsheviks consequently appeared revolutionary, but there was nothing inherenly socialistic about the demands put forward. By constituting themselves the state power the Bolsheviks filled the void for political power and authority and thus pushed forward Russia's bourgeois/capitalist revolution and administered a growing capitalism when the bourgeoisie was too weak to do so itself. As a result, state capitalism was raised to the level of party and state ideology as Leninists, until this day, unabashedly and deliberately confuse socialism with state control.

There are not the only differences between Marx and Lenin, others exist concerning the very materialist conception of history. This review, as stated in the begining, is not a call for dogmatism and the quoting of "sacred" texts, but it is enough to see that Marxism-Leninism is a contradiction in terms. It is from this comparison and the mistakes made within the movement itself that socialists and the critics of socialism must learn to tear away the myth from Marx in order to discover him. 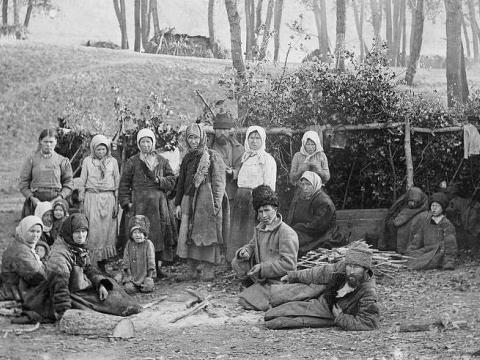 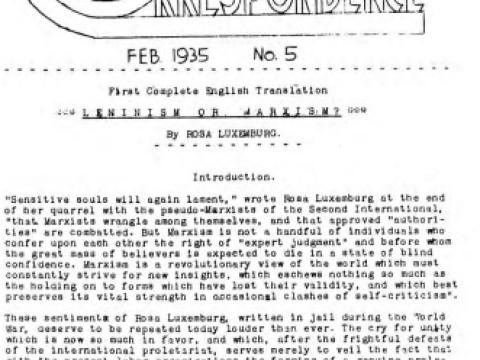 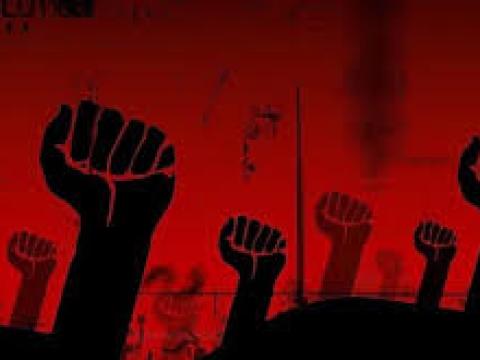 Rethinking the Marxist conception of revolution

A critique and revision of the Marxist conception of socialist revolution.