The prolonged May Day in Iran hasn't finished yet. This year in the consequence of the ever-worsening financial situation in the country a group of workers, students and activists gathered in front of the parliament of May first to raise their voices about the issued related to the hard lives of the wage earners, disastrous rate of unemployment, precarious working conditions and the suppression of working-class protests. The gathered faced violent intervention of the police, and dozens were arrested; some were released during the next days and weeks, but a few are still in jail.

Marzieh Amiri, the Iranian journalist, received a ten-year jail sentence while Neda Naji hasn't gone to court yet. On September twenty-first, these two along with Sanaz Allahyari and Asal Mohammadi who have been arrested for supporting workers and reflecting their struggle in the media wrote a letter from inside jail addressed to the activists and the civil society. They have written: “Although we have seen only injustice up to now, despite our lengthy temporary detention and the probability of facing oppressive and unjust sentences teases our souls but the passion for life, the desire for freedom and the joy of being with our loved ones, full our moments with hope.”

The full text of the letter:

Making a living has become the biggest concern of wage earners. On the one hand we have the corrupt, the embezzler and the swindler enriching themselves and on the other hand, the inhumane sanctions of the world economic leaders. Both are making the life of the working class harder.

The subaltern, in an unequal struggle for finding and keeping jobs and also receiving their back pay, try to protect their small assets against the owners of power and wealth.

The protests of Haft-Tapeh Sugarcane Factory workers were example of these struggles which was based on workers' justified demands. These protests reflected the workers’ cry for their subsistence and were out of pain. They were protesting the situation that has more or less brought all of the wage earners, including us on knees to a dead-end. As part of this society that has been affected by the economic situation, we found the worker's demand as ours and we supported them.

But the reaction of security forces with the worker and their supporters with the excuse of fighting a “national threat” was too extreme and harsher than before which led to long-lasting arrests (for instance eight months has passed since the temporary detention of Sanaz Allahyari and Amirhossein Mohammadifar) having to undergo solitary confinement even after the interrogation phase, transferring our sisters Atefe Rangriz and Sepideh Gholian to Gharchack prison (as extra punishment or exile) issuing heavy two billion Toman bail and not implementing it and finally the heavy sentences

In a purely unfair process and without any attention to the defenses of our lawyers and ourselves, and only based on the case executives, the Revolutionary Court issued heavy sentences of ten and a half to eighteen years, while Neda Naji, one of the detainees of Labor day protest is still awaiting trial.

Being jailed and facing heavy sentences put on the verge of collapse everything that we had tried for all our lives. Loves that faced separation, studies left unfinished, houses and jobs that were lost and bodies that were dwindled and then came the tears of mothers who were waiting for justice.

But what makes this pain worse is how they are favoring the embezzler and corrupt over the social activists and journalists in front of law; this discrimination makes one lose all hopes of justice and forces them to gamble on his life when he's facing the court.

Although we have seen only injustice up to now, despite our lengthy temporary detention and the probability of facing oppressive and unjust sentences teases our souls but the passion for life, the desire for freedom and the joy of being with our loved ones, full our moments with hope. Like our brothers and sisters who seek equality and have been spending the dark days of prison with the same hope.

Your voice that was pleading for justice from the judicial system provoked a lot of reactions including the reaction of the head of this system that called for a fair inquiry of the Verdict that was submitted by 28th branch of revolutionary court.

Your call for justice not only shed a light of hope in our hearts but in the hearts of all those who are unfairly imprisoned. Our relief is in the continuance of the call that is coming from the bottom of the society demanding justice and we hope that hearing this call by the judicial executive would lead to a fair judgement.
Your devotion to the truth of your efforts for the unconditional release of us is heartwarming. 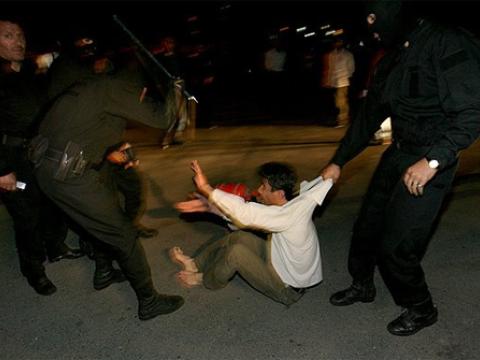 Harsh sentences have been thrown at labour activists in Iran following recent class struggle and repression.

200 imprisoned union bus workers released; all were denied the right to return to their jobs. Hundreds more are still in prison.

On Saturday, May 1st, 2004, hundreds of workers and their families in the City of Saqez, Kurdistan province, staged a rally and march to commemorate the International Workers’ Day.
Image 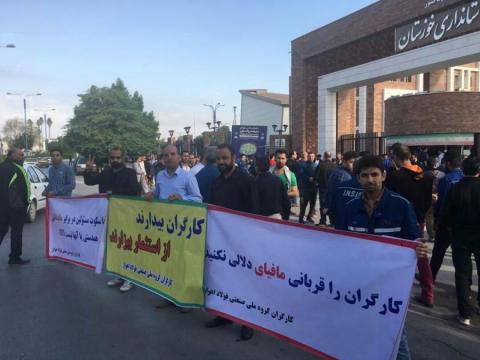 A statement from the IWW on the recent arrests of striking workers in Iran.