Two models of "socialism" presently prevail. They are Social Democracy and Bureaucratic Collectivism. Both the former with its concentration on the welfare state and state intervention in the economy and the latter with its plan attempt to administer society according to a bureaucratic plan or plans and attempt to fulfill the needs of their societies for ever more capital and consumer goods. In both these societies there is a hierarchy that is not hidden by the formal democracy in Social Democracy or the rhetoric of Bureaucratic Collectivism.

Against these two models of society Libertarian Socialists have upheld the principle of self-determination which means not only the control of impersonal economic processes but the collective administration of society by all its members. This is not to be confused with forms of "workers' control" which decide how to implement decisions arrived at from above. Instead it means the democratic determination as well as implementation of the goals of a society.

Why is this important? Not because of any abstract democratic dogma. The collective self-management of society is required if certain needs suppressed in this society are to be realized. In general these needs can be described as reconciliation with nature both inner (desire for immediate gratification) and outer (the sensuous world).

Capitalism requires the endless accumulation of capital goods. Hence any object is a potential instrument for the creation of other instruments. Any quality it has that cannot be employed in the accumulation of capital is abstracted from or even forgotten. Thus capital accumulation requires a repression of outer nature -- it can have no worth of its own, it must be simply a source of tools and raw materials. This in turn requires a repression of inner nature -- urges to enjoy the sensuous outer world must be repressed.

Along with continuous capital accumulation occurs the production of consumer goods market but this doesn't result in the satisfaction of repressed needs. The consumer must be encouraged to be dissatisfied with the present supply of goods so that he/she can buy more. Thus the existence of an infinite possibility of fulfillment of consumer wants results in an endless dissatisfaction with the goods already possessed. And of course the consumer will have to continue his/her laborious toil to buy these goods.

This repression of needs must continue as long as capital accumulation remains unchecked. For under such a system it will not be possible to think of the objects produced except as tools to make tools. As objects to be used rather than enjoyed.

Furthermore the endless accumulation of capital reduces that shortening of the working day which Marx called the basic precondition of freedom.

Thus there is a very basic connection between the form of Libertarian Socialism -- self-management -- and its content -- the satisfaction of basic needs through the reconciliation with Nature. Only through the self-management of production will it be possible to produce objects to satisfy needs for enjoyment. At present these repressed needs are expressed in art and play.

In this society play and art have no utility as independent activities -- a source of freedom and a limitation. Art abandons any claim to shape this society for the freedom to create its own world where freedom and sensibility are united in an aesthetic form according to its own proper laws. The conflict that exists between a reason bent on domination and sensibility which must serve as a mere raw material is replaced by harmony. The aesthetic form is not imposed upon sensory experience but instead allows it to express truth that is suppressed in daily existence. However Art remains a contemplative activity for most people especially with its enshrinement in museums.

Play however is something that all can participate in at least in its early stages in childhood and in this period it is egalitarian as well. Each player in the simple childhood game takes his turn or plays in a circle. And like art play is performed for its own sake according to its own rules. However, to a large extent it is devolved as trivial, made into a contemplative activity (spectator sports) or comes to reflect a repressive society (card games are played for money and schools compete in hierarchically organized teams that vie for rewards.)

However play is a reconciliation between reason and sensibility. There are rules but they have no other aim than to provide enjoyment.

Both these activities prefigure a new society -- one where rules are freely chosen by those to whom they are applied and reason and sensibility are united. It is now more possible than ever before to construct such a society. It would mean that play could come into its own and be taken seriously for its own sake. The conflict between freedom and necessity would disappear as work could be performed as an enjoyable activity. In fact enjoyment of work would become a need. It would be performed in accordance with needs for objects of beauty and enjoyment as well as mere utility.

For such a society to be realized there must be a revolt against the present system whereby needs are reduced to the need for objects of mere utility in the cause of infinite capital accumulation imposed by hierarchical plans. In short there must be a revolt against bureaucracy -- the predominant trend of societal organization. While there is no evidence of a mass movement against bureaucratization, still we can observe the following trends:

1) The attempt to reduce all facts to a system of deductive equations is ultimately self-defeating. It can't be done even for natural scientific subject matter, is less possible for societies and is impossible under a dynamic capitalist economy where means of production are constantly changing.

2) Thus it is necessary to summon the resources of those who were to be administered in order to deal with shortcomings that must necessarily arise in the plan.

3) To do this throws the system of hierarchical domination into question.

4) Therefore the informal groups that are formed in factories, neighbourhoods, and all other places where it is necessary to respond to bureaucratization must be crushed but can never entirely disappear.

5) Any revolts against bureaucracy that have been internalized can create the conditions for a higher level of consciousness later. Revolts against monopoly capitalism led to the welfare state. Now this cushion against unemployment has led to a revolt against work and labour discipline.

6) This revolt against bureaucracy can become more universal as bureaucratization expands. Thus not only the industrial worker but the housewife, tenant, student must respond to bureaucratization. The revolt can encompass all aspects of daily life.

It should be pointed out that there is no guarantee that anyone group in this society -- including the proletariat wherever and whatever it is -- will necessarily be the bearer of the universal. The World Spirit owes us no favours. All that bureaucratization implies is that more and more the critique of anyone's particular condition can if pushed far enough lead to the critique of society.

The Crisis of Dialectical Materialism and Libertarian Socialism 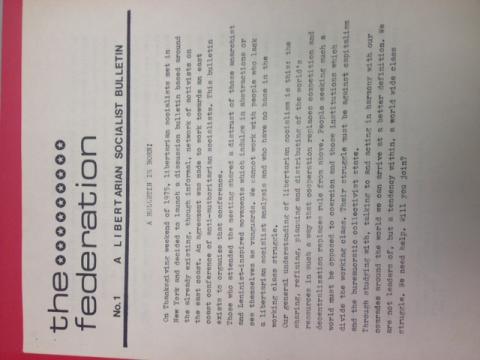 In 1974 a small group of anarcho-syndicalists, libertarian socialists and anarchist-communists from…

Second text by Socialism Reaffirmed, later renamed Solidarity, laying out a libertarian socialist programme. Breaking with the politics of social democracy and Trotskyism, it tries to set forth the tasks of the socialist revolution and aims at eliminating the road which the working class can take to emancipate itself. Published around 1960. 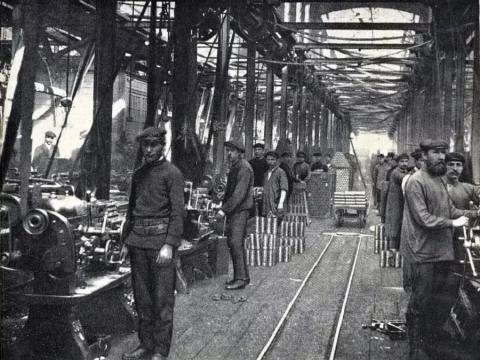 The Paradoxes of working class of Russia

The history of the working class of Russia and the USSR is full of paradoxical situations. We will tell you about some of them.