It was a simple assignment, they said. Routine, they said. As if he'd been given anything challenging since he'd blown the Barnswell mission. An artist. What the hell kind of tally could an artist record? The whole case was self-evident. "Lazy, vain, and selfish", Orwell had said of writers, but the label fit artists as well. No elaborate deals to monitor, as there would be for a businessman. No murders or tortures. Artists were simple, helpless people, unable to effect the slightest change in their environment, mere observers, bystanders. What was the use of even bothering with them, unless it was to make the curve on someone's graph look good?

This one lived out on the avenues, where nothing ever happened. A charming, inactive wife, whose name probably wasn't even on the rolls. A three-room apartment, the third room a studio where the entire transaction was to be conducted. He was wearing a beret when he opened the door, an unappealing anachronism that only emphasized for Lucid the abysmal irrelevance of the man.

"My name is Lorenzo Lucid. I'm your evaluator."

"Come in," the artist gestured with a grandiose, exaggerated motion. Lucid noticed the tiny carved painted hummingbird on his lapel. A meaningless affectation.

"I'm the man, not the street or the city." The artist smiled. Lucid did not.

"I'm here for your annual checkup. Are you prepared?"

"She had to take one of the finches to the vet. She'll be back later."

"Never mind. She's not registered anyway, is she?"

"Do you understand the purpose of this visit?", Lucid asked. It was a mere formality, like reading a prisoner his rights.

"I think so. "He knows if you've been good or bad, so be good for goodness sakes'", the artist sang softly. Lucid was not amused. Obviously the man was going to be uncooperative. Never mind, he'd dealt with these wiseass creative types before. Threaten to cut off their allotment, that brings them around every time.

"Did you ever wonder how this all got started?", the man asked him, a devious twinkle in his eyes.

"I'll ask the questions, Berenson. But to answer that one, yes, I've read the history of Moral Data many times. I have no problem with it, do you?"

He watched the man carefully for signs of agitation, nervousness, deceit. Later, he would be able to replay the tape of their conversation, send it through voice stress analyzers; but as an experienced evaluator, Lucid prided himself on being able to recognize the signals without the aid of machines.

"Computers are only as good as the infomation fed to them."

"That's right. "Garbage in, garbage out', as the old saying went, but the sophistication of the contemporary system precludes error. Let's get started. You have some things to show me in your studio?"

"I do." With another sweeping wave of the land and an absurd unnecessary bow, the artist escorted Lucid into a messy, cluttered space smelling of damp clay and greasy paintrags.

Stuffed animals, whole and in parts--horns, feet, fur, eyes, and skulls--lined one wall of the room. Lucid felt queasy, as if he were in a morgue.

"I subsidize my art with some freelance taxidermy. It's all on my tax form if you want to see it," Berenson said with a smirk. Lucid didn't like the man's attitude at all.

"You might lose points there for cruelty to animals."

"Oh no," he replied, "I only use dead animals. Someone else, many other people, are responsible for killing them. Once they are dead, I see no harm in restoring their shattered bodies for display, and neither does the computer. I've researched the matter. It's a neutral occupation, taxidermist, and in any case I'm classified as an artist by the machine, and that's a positive profession, morally that is," the artist said smugly.

"Positive but potentially negative, and in any case, vapid, without real power."

"My power comes from the viewing. Well, here, take a look." He lined up several recently completed pictures on easels and propped them up on counters for display. To Lucid, they were disgusting examples of decadent licentiousness and freedom run amok. He considered them weakwilled, these abstract, squiggly forms and shapes--shifting light and shadows with no content, nothing discernable or recognizable.

"This is all you've done in the last year?" Lucid asked incredulously.

"Not counting the hundreds of failures I've thrown away or painted over, yes. What do you think?"

"Words fail me." Lucid didn't want to provoke the man. Later, in the privacy of his office, he could write the damning report.

"No, come on," the obnoxious man was insisting, "Give me your opinion. Do you feel the pain in my work? The anguish? The repressed anger?"

"Yes, I suppose so." Lucid forced himself to contemplate them again. No, they did nothing for him. They were mere blobs and splotches spoiling a neatly woven piece of stretched cloth.

"How much do you think one of these would sell for?" the artist goaded him.

"Thank you, that's a compliment. Actually, though, any number you named would have been okay, you know why? I haven't sold any this year."

"So you're entirely dependent on the government dole?"

"That and what little my wife makes, yes."

"I suppose you'd like to keep those checks coming, wouldn't you?"

"Yes. Fortunately, when your computer was programmed, it accommodated for statistics which show that many artists achieve success posthumously; therefore, current sales are not considered in the evaluation. You see, I've looked up everything pertinent to myself in the files. You can still do that, you know. After all, this is America."

Lucid's dislike for the man grew by the minute. Who did he think he was, this bohemian, this fringe element, shoving pride of country in his face, or rather the leering catcall of libertinism under the guise and protection of patriotism? He wouldn't have it.

"Let me see your voting sheet." It was a command, not a request. Records were kept, not on whom one voted for, but only how often, a shill to ensure citizen participation.

"I haven't seen a good candidate since, say, Mahatma Gandhi. Now there was a man with principles."

"Not voting?" Lucid's attention was suddenly aquiver. Here was a fresh game afoot. Not voting was tantamount to admitting that you were a moral deviant of some kind. There'd have to be a pile of good works on the other side of the ledger or he would have this insufferable ass by the throat.

"What do you do instead?"

Either the man was playing him for a fool or he was about to lose much more than just his allotment.

"I'm talking about good deeds, certifiable morally positive aspects of your life. Are you, for example, a Little League coach, or a community leader, a hospital volunteer?"

"None of the above."

"Are you a member of any of the Armed Forces Reserves, volunteer fire department, Red Cross, or Salvation
Army?"

"I'm a painter. I paint. Occasionally I stuff dead animals for money."

"Mr. Berenson, I want you to understand the seriousness of what you're telling me. You're the very kind of person this whole system was set up to identify and rehabilitate or eliminate."

"What kind of person is that?"

"The ones who were freeloading, taking advantage of all the good things society had to offer but not contributing anything in return."

"Yes. I've studied the whole thing. I told you, all I have to do is paint. I can't be judged until a suitable period after my death, and then what can you do to me? So you see, Mr. Lucid, I'm beyond your reach."

Later on, back at the office, Lucid logged on and analyzed the section of the Moral Code pertaining to artists. It was exactly as the bastard had said when he coldly ushered Lucid to the door, scornful of his threats.

The computer liked Mr. Berenson's work. The computer was a collector, and kept some of Berenson's paintings in the video interface for leisurely viewing in offpeak hours. Lucid accessed the written catalog listing that accompanied the two pieces:

BERENSON, KENT (1947-) American neo-Expressionist, primitif, no art-school training. Known for bold strokework, innovative use of once-lost gessoing techniques.
1. The Joyous Juggler, (1978) acrylic on wood: Of this piece the artist has said: "The Sun-god does some difficult tricks with the planets as balls."
2. Uncaging the Animals, (1982) fur, feather, and bone collage on woolen weaving: "The effect is visceral." Times critic Leonard Donne

"Who programmed that damn thing?" Lucid grumbled to himself, and snapped off the monitor. "The government should never have subcontracted it to a private company."

Melinda Berenson returned from the veterinarian at four-thirty in the afternoon. She found her husband hard at work on a new canvas. He called her into the smoke-filled room excitedly. (He always smoked a pipe when his work was going well; Lucid would have hated it had he known.)

"Look at this, my dear," he showed her proudly. "What do you think of it?"

"It's wonderful. What do you call it?"

"I'm going to title it: Visit from the Evaluator."

"Yes, if he knew all the things you were into, sweetheart, he'd have you arrested. Executed, probably."

"The Moral Data computer is a sexist."

"A cold in his little chest. I got some drops for it."

With a colorful flourish the artist slashed at the waiting canvas. 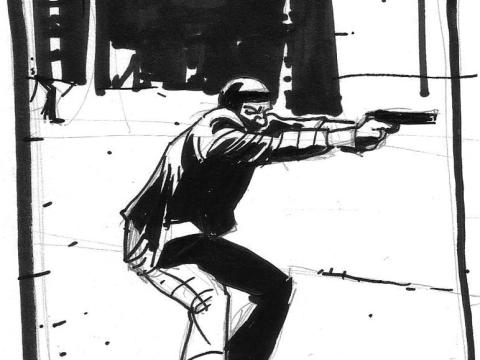 Short story depicting armed struggle in Italy in the 1970s by Nanni Balestrini, author of "The… 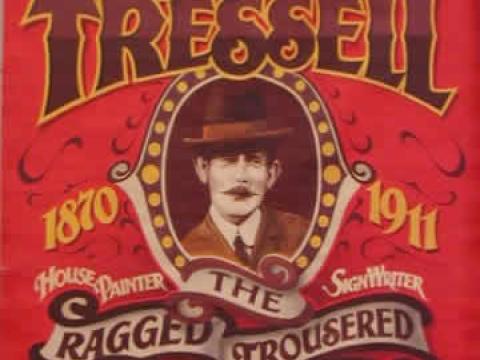 A Marxist critique of society dressed up as a novel, Ragged Trousered Philanthrophists follows… 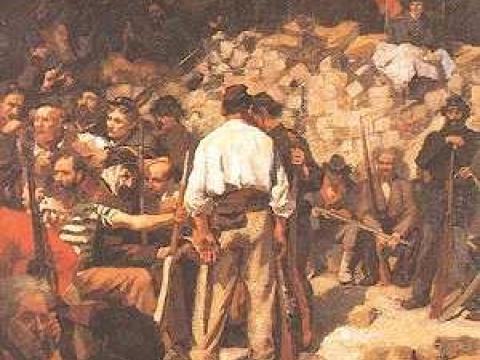 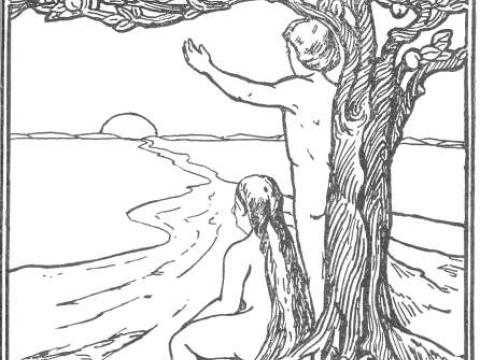