These are just some thoughts on a still unfolding event. Things might be clarified or updated by the time you read this, so please keep yourself informed. Also, please forgive errors in this text as we write this while still weary and smelling of tear gas and smoke.

We arrived a little before noon to Oscar Grant Plaza (OGP). Other marches had returned already, and still other marches were to come. The atmosphere was festive and joyous, and anyone you spoke to had awe in their voice. With only a week to prepare, there wasn’t a well organized sequence of events – perhaps for the better – so, between marches we looked around and meandered. We spoke with comrades and random folks. We looked to see what we could offer each other, and shared the bits and pieces of news and what we had gathered about the itinerary for the day. We heard the Port of Oakland had already been partially shut down by the sheer volume of sick calls made by port workers. We also heard that several banks through out the city had been closed, while a few others like Comerica continued to function. Within half an hour, folks organized themselves to go and shutdown that branch; this kind of thing was common place through out the day.

Waves of marchers entered our midst one after the other, boosting our presence by several hundred new faces at a time. Within a period of an hour, the General Strike children’s brigade, Berkeley students, Laney students, and various high school folks joined the growing crowd. It was nearly impossible to estimate crowd size as folks were coming and going on marches and the whole of the strike at that point congealed around several spots. We estimated the crowd size to be roughly 5,000 people by around noon. As a portion of the crowd had marched from the UC’s and from other schools, there was a large contingent of 4-500 that split off from OGP to march down to the UC Office of the President to confront rumors that police had set up some sort of intelligence/command center there1 . UCOP was locked down before we even arrived, so we couldn’t get in, but we did stand outside and chant vigorously at the soundproof, shatterproof glass doors.

Every time we left OGP and returned, we were stunned by the crowd size; it was always immense and breathtaking. As 2pm drew nearer, folks with a sound system on a large truck announced the planned anti-capitalist march that would be starting shortly. At first many of us were unsure where the march would begin. We saw a seemingly continuous crowd a bit past 14th and Broadway with massive banners – some hanging in the air with the aid of 10ft balloons. It took us a while to realized this 1,500-2,000 strong crowd was here for the march. We took our places near the front with the folks in black bloc, leading the mass of folks behind us. It was an odd mixture of black flags and drums – something all too familiar to anti-globalization protests. As we began, we twisted and turned down different streets, from broadway to webster. This route led us past a few banks. Windows were smashed and walls were tagged with anti-capitalist messages. What can be said here except, “of course?” Those who confused property destruction as form of violence jeered, as would be expected; and those who presumably disagreed with the property destruction on a tactical basis (or as undercover police) tried to intervene. With no doubt we can assure you that, those who tried to intervene physically tackled property destroyers and taggers, if not used violence out right. Indeed, some who disagreed with property destruction somehow felt it was appropriate to go above and beyond documenting the events with discreet photographs of broken windows, but instead actually pursued some people into the crowd with videocameras. Again, these kinds of things are par for the course, but it’s always necessary to say that property destruction – particularly of corporate property – is not an ethical issue, it’s purely a tactical one; beyond anything else, its imperative to remember that the people in this march, the people in the occupations, the people who fight against the 1% and capitalism are comrades, even if they’re not perfect (in whatever way you deem). So, DO NOT endanger or attack them!

With that said, the march eventually approached the Oakland Whole Foods, which was thoroughly pummeled by paint balloons. Others tried to smash the shatterproof windows, while still others tried to intervene; some going as far as grabbing chairs thrown at windows and ejecting them back at the unsuccessful window smashers. Rather than stay to argue and intensify confrontations among demonstrators, the bloc moved on. The crowd had thinned somewhat by this point, but still a large number of people followed. Upon returning towards downtown, on Harrison, we rolled by the large Bank of America branch. It was clearer at this juncture what would happen, and it appeared that for the most part, less people tried to intervene this time. Windows shattered to fine particles along the shaded corridor and messages of class war were scrawled on its walls. The march continued back to OGP, only to make a small detour towards the end at the UCOP office to see if a second attempt at ruffling some feathers might work. Nothing was left damaged as far as we can tell, although the doors were painted a sort of beige color by another volley of paint filled balloons. It should be noted that through out this march, perhaps only four police officers were witnessed during the entirety of the route. As we returned to Broadway, anything that could shatter at the Wells Fargo branch was promptly smashed; citibank(?) was left unscathed in the end as some of the 99% decided to stand in front of the doors and ATM machines – that is to say they put their bodies on the line to defend the property of the 1%. By the time we returned, the designated time to march to the Port of Oakland for the shutdown was fast approaching.

After half an hour and a slew of buses having come and gone to send an advance group to the port, we began to assemble to march. The long march snaked through streets with little excitement, but with a fair amount of energy. After what felt like an hour, those of us in the front reached the first staging area for the blockade. Much to everyone’s amazement, a flood of other marchers could be seen stretching the mile or so of our path behind us – rolling thousands deep. We were greeted by rows and rows of semi-trucks with shipping crates in tow, the critical mass (of bikes) that lead the way, and a handful of bussed-in demonstrators. The march leaders convened to plan out how we needed to distribute ourselves as we stopped for a moment. Eventually a plan was decided upon, and a staggeringly long human mic chain emerged, from bullhorn to masses to masses to masses – one chain behind the other, stretching for what seemed like miles back.

As we marched on, each gate or berth we passed had a contingent of marchers who stayed behind. Shortly before 6pm, we reached the final gate and began a long waiting game. Sitting at one berth, you could see demonstrators come and go, trying to figure out where they needed more people or trying to figure out where they’re friends were. As time passed, we heard reports of the 2nd march coming to the port with details suggesting they were 10,000 strong, streaming continuously from OGP to the Port. We were all low on energy and water, but we stuck together for several hours during the transition between the fading sunlight into darkness, only to be lit by tall lamps and police spotlights from the chopper above. During this time, more rumors spread: this time about a march occupySF was leading onto the bay bridge. Unfortunately, we were never able to confirm that report. Furthermore, around this time we heard that demonstrators were being hit by angry drivers somewhere near 11th and Broadway, hospitalizing at least one. A few twitter reports scattered among the gossip about the incident included details of one demonstrator being fatally injured; however, this too was never confirmed. Despite confusions over the technicalities of blocking the ports to allow the port workers to stay home, we eventually were given confirmation that port workers would not have to go to work that evening. Many of us marched back to OGP lead by the sound-truck blasting classic hip-hop, while others stayed behind with chain linked fences and dumpsters to blockade semi-trucks from leaving or entering the port.

Most of us arrived back at OGP with only half an hour before the 10pm convergence. As 10pm passed, a small group of demonstrators left OGP and marched to 16th st. There we found a two story brick building. On the second floor, a backlit banner read, “Occupy Everything” in painted helvetica font2 . The crowd roared. News of the building takeover spread quickly, such that the initial crowd of 150 or so swelled to over 700. The building, a former Traveler’s Aid Society, was shut down due to budget cuts and was completely empty, but full with promise. Later, a sound system was erected and a dance party commenced.

Gradually, rumors of cops amassing on streets only blocks away caused folks to start barricading either ends 16th street with dumpsters and newspaper boxes, along with a slew of other randomly collected items. As midnight rolled by, shouts announcing the arrival of police echoed down the dark alley way. We rushed to adjacent streets to find police lined up a few blocks away on San Pablo, Telegraph, and Broadway, somewhere around 19th street. As we got closer, we could tell that the police were several hundreds – maybe a thousand strong – all in full riot gear. What might be generously called a street battle commenced, however to be truthful, most of the demonstrators were only burning trash to create a dramatic bonfire and staring down the police. Although constant calls for non-violence were echoed by folks standing a hundred feet behind the barricades, we weren’t really given a chance to “fight” the police as volleys of tear gas and concussion grenades were thrown into the crowd. This lead to a long back and forth movement: tear gas dispersed one of the barricades, some returned to remove the canisters or others simply waited for canisters to fizzle out, and then police gained some ground. For several hours we stood our ground as best as we could. Police eventually inched their way to the periphery of the plaza, but their slow speed seemed to puzzle us more than create any sense of tension. Many of found us asking each other what the police were trying to accomplish that night? Moreover, people were confused as to why the police even showed up in the first place. The only thing that seems to be clear is that the police were planning some sort of brute response for that night regardless of what the General Strike looked like; the large number of police seems to be evidence enough that the police were planning this from the start.

After we left the plaza, we were disheartened to hear that police encircled some folks around a fountain near OGP, on San Pablo and arrested around 100 comrades. 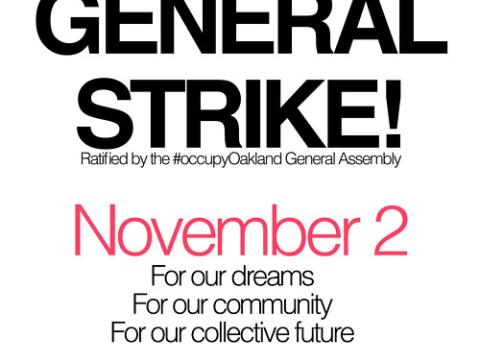 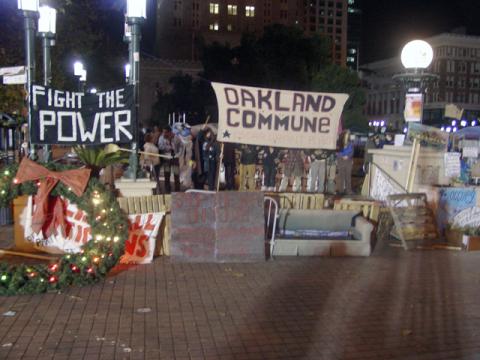 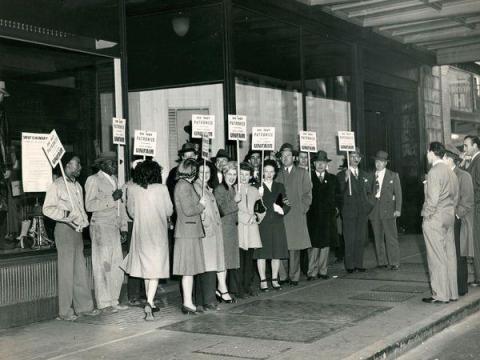 This article by Richard Boyden is the most comprehensive account of the 1946 Oakland General Strike. It relies extensively on first-hand sources,… 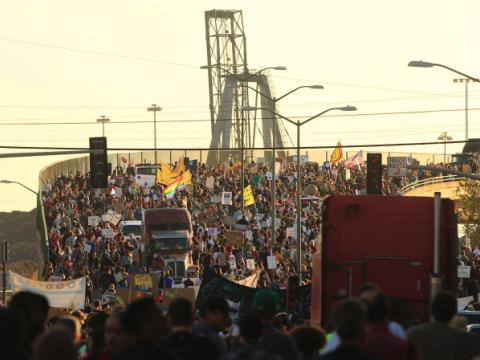