THE ACTION COMMITTEES born throughout France at the end of May transcend half a century of left-wing political activity. Drawing their militants from every left-wing sect and party, from sociaI democrats to anarchists, the Action Committees give new life to goals long forgotten by the socialist movement; they give new content to forms of action which existed in Europe during the French Revolution - they introduce into the socialist movement altogether new forms of local participal and creative social activity.

This article will trace the development, during the last ten days of May of a committee (the 'Workers-Students Action Committee-Citroen') whose primary task was to connect the 'student movement' with the workers of the Citroen automobile plants in and around Paris.

On Tuesday, May 21, a strike committee representing the workers of the Citroen plants called for a strike of unlimited duration. The factory owners immediately called for 'state powers to take the measures which are indispensable for the assurance of the freedom of labour and free access to the factories for those who want to work.' (Le Monde, May 23.)

The same day that the owners called for police intervention, students, young workers and teachers who, on previous days had fought the police on the streets of Paris, formed the 'Citroen Action Committee' at the Censier centre of the University of Paris. The first aim of the Action Committee was to co-operate with the factory's strike committee in bringing about an occupation of the factory. The Action Committee's long-term goal was to help bring about a revolutionary situation which would lead to the destruction of capitalist society and the creation of new social relations.

Action Committee Citroen is composed of young French and foreign workers and intellectuals who, from the committee's inception, had equal power and equal voice in the formulation of the committee's projects and methods. The committee did not begin with, and has not acquired, either a fixed programme or fixed organizational structure. The bond which holds together former militants of radical-left organizations and young people who had never before engaged in political activity, is an unconpromising determination to dismantle the capitalist society against whose police forces they had all fought in the streets.

The committee has no fixed membership: every individual who takes part in a daily meeting or action is a participating member. Anyone who thinks enough people have gathered together to constitute a meeting can preside; there is no permanent president. The order of the discussion is established at the beginning of the meeting; the subjects to be discussed can be proposed by any member. The committee is autonomous in the sense that it does not recognize the legitimacy of any 'higher' body or any 'external authority'. The committee's projects are not realization of predetermined plans, but are responses to social situations. Thus a project comes to an end as soon as a situation changes, and a new project is conceived, discussed, and put into action in response to a new situation.

INTERNATIONALISM
Another leaflet was the first public announcement of the committee's uncompromising internationalism. 'Hundreds of thousands of foreign workers are imported like any other commodity useful to capitalism, and the government goes so far as to organize clandestine immigration from Portugal, thus unveiling itself as a slave-driver.'

The leaflet continues: 'All that has to end. The foreign workers contribute, through their labour, in the creation of the wealth of French society.... It is therefore - up to revolutionary workers and students to see to it that the foreign workers acquire the totality of their political and union rights. This is the concrete basis for internationalism.' ('Travailleurs Etrangers', Comite d'Action, Censier.)

At 6 a.m. on the morning of the occupation, when the Citroen workers approached their factories, they were greeted by young workers, students and teachers distributing the orange and green leaflets. On that morning, however, the young Action Committee militants were greeted by two surprises. First of all, they found the functionaries of the CGT (the communist union) calling for the occupation of the factory, and secondly, they were approached by the union functionaries and told to go home.

On previous days, the CGT had opposed the spreading strike wave and the occupation of the factories. Yet on the morning of the occupation, arriving workers who saw the union functionaries reading speeches into their loudspeakers at the factory entrances got the impression that the CGT functionaries were the ones who had initiated the strike.

However, the union, unlike the student movement and unlike the workers who had initiated the strike, was not calling for expropriation of the factories from their capitalist owners, or for the creation of a new society. Thus the functionaries of the communist union were calling for higher wages and improved working conditions, within the context of capitalist society. Thus the functionaries strenuously opposed the distribution of the Action Committee's leaflets, on the ground that their distribution would 'disrupt the unity of the workers' and would 'create confusion'.

The union functionaries did not spend too much time arguing with the Action Committee militants because the factory occupation did not take place as they had 'planned' it.

FUNCTlONARIES MANOEUVRE
At that point the union offlcials stopped trying to chase away the Action Committee agitators; in fact, the officials decided to use the agitators. Among the agitators there were young people who spoke all the languages of the foreign workers, and the young people mingled freely with the foreign workers. On the other hand, the union offlcials, seasoned bureaucrats, were institutionally unable to speak directly to the workers: years of practice had made them experts at reading speeches into loudspeakers, and their loudspeakers were not leading to the desired effects.

Thus the functionaries began to encourage the young agitators to mix with the workers, to explain the factory occupation to them; the functionaries even gave the loudspeakers to some of the foreign members of the Action Committee. The result was that, after about two hours of direct communication between the foreign workers and the Action Committee members, most of the foreign workers were inside the factory, participating in its occupation.

Proud of their contribution to the occupation of Citroen, the Action Committee people went to the factory the following morning to talk to the occupying workers. Once again they found themselves unwelcome. A large red flag flew outside the factory gate, but the young militants found the gate closed to them. At the entrances to the factories stood union officials who explained they were under strict orders (from the union's-and the CP's-central committee) not to let students or other outsiders inside the factory. The young agitators explained that they had played a crucial role in the factory's occupation, but the expression on the faces of the union functionaries merely hardened.

That evening the Citroen Action Committee had an urgent meeting. The committee's members were furious. Until now, they said, they had co-operated with the union; they had avoided an open confrontation. Their co-operative attitude had made no difference to the union officials; the committee militants had merely let themselves be used by the functionaries, and once used up, they were rejected. It was about time to confront the union openly. The Committee drafted a new leaflet, one which called on the workers to push past the union and take control of the factory into their own hands.

THE LEAFLET
'Workers, now you are the masters of your factory. You are no longer controlled by the owner or by the state. Be careful not to fall under the control of a new power,' the leaflet begins. All of you, French as well as foreign workers, have the right to talk. Don't let the loudspeakers talk for you.... Only you can decide what to produce, how much, and for whom. Don't let anyone take that power from you. If a group makes your decisions instead of you, if a group uses loudspeakers to yell to you what decisions "we" reached, then this group does not seek to help you, but to control you.' ('Travailleurs!' Comite d'Action Travailleurs-Etudiants, Censier.)

Due to the presence of union guards at the factory entrances, a relatively small number of workers read the leaflet. However, among these workers there were some who resented the union take-over inside the factory, and some who began attending the meetings of the Citroen Action Committee and participating in the political discussions at Sorbonne and Censier.

At this point the Citroen Committee, together with other action committees at the Sorbonne and Cellsier, composed a call for action of the workers inside the factories, 'The policy of the union is now very clear; unable to oppose the strike, they try to isolate the most militant workers inside the factories, and they let the strike rot so as to be able, later on, to force the workers to accept the agreements which the unions will reach with the owners,' the leaflet explains. However, the leaflet continues, 'the political parties and the unions were not at the origin of the strike. The decisions were those of the strikers themselves, whether unionized or not. For this reason, the workers have to regain control over their work organizations. All strikers, unionized or not, unite in a Permanent General Assembly! In this Assembly, the workers themselves will freely determine their action and their goals.'

ACTION COMMITTEE PROJECT
The Action Committee's project initiated and stimulated various kinds of activities among the foreign workers. Courses were organized for foreign workers who knew no French. At Nanterre for example, the occupation committee of the University there granted a room to a newly-formed action committee of Yugoslav workers. The room was used for political meetings and French lessons. In another centre, the workers organized to protect themselves collectively from abuses by the landlord's (namely Citroen's) agent at the housing centre. In some of the ghettos around Paris where workers had run out of food for their families trucks were found to transport food from peasants who contributed it at no cost. Contacts were established between the foreign workers and thc revolutionary workers inside the factories. Foreign workers were encouraged to join French workers in the occupation of the factories. On each excursion to the living quarters, the Citroen Action Committee members told the foreign workers not to let themselves be used as strike breakers by the factory owners.

In all of the contacts between the Citroen Action Committee and foreign workers, the committee's internationalism was made clear to the foreign workers. When the committee members called for expropriation of the owners and the establishment of workers' power inside the factories, they emphasized that the power would be shared by all labourers who had worked in it, whether French or foreign. And when some foreign workers said they were only in France for a short time and would soon return home, the Action Committee militants answered that the goal of their movement was not to decapitate merely French capitalism, but to decapitate capitalism as such, and that thus, for the militants, the whole world was home. 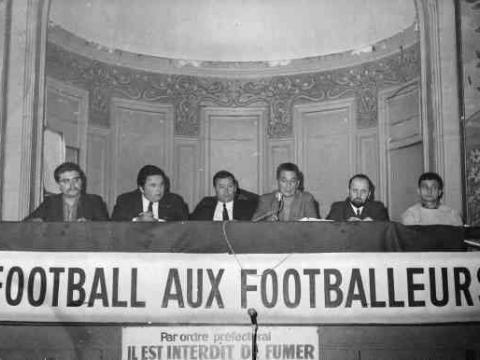 In the insurgent Paris of 1968 when millions of workers were on strike, the students had occupied… 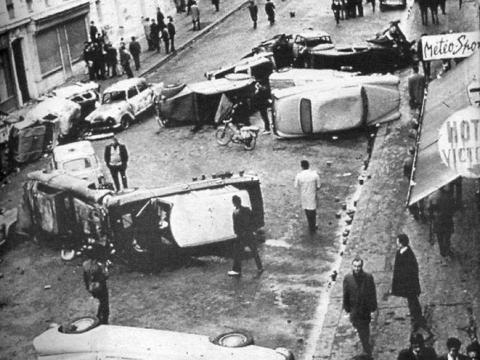 1968: a chronology of events in France and internationally

A brief chronology of the events which swept France in May and June 1968. Starting as a student… 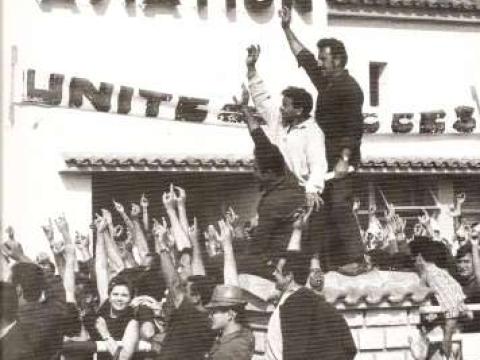 Andre Hoyles analyses the development, organisation and end of the mass strike in France, 1968, with… 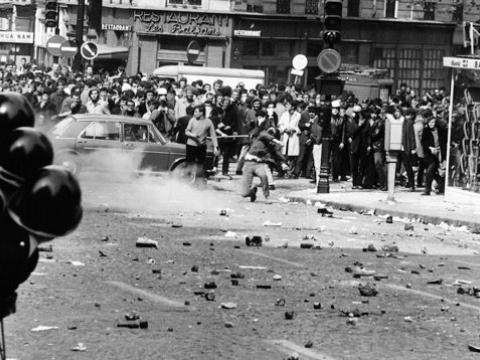 Enragés and Situationists in the Occupations Movement